How To: Take Better Photos While Mountain Biking

How To: Take Better Photos While Mountain Biking 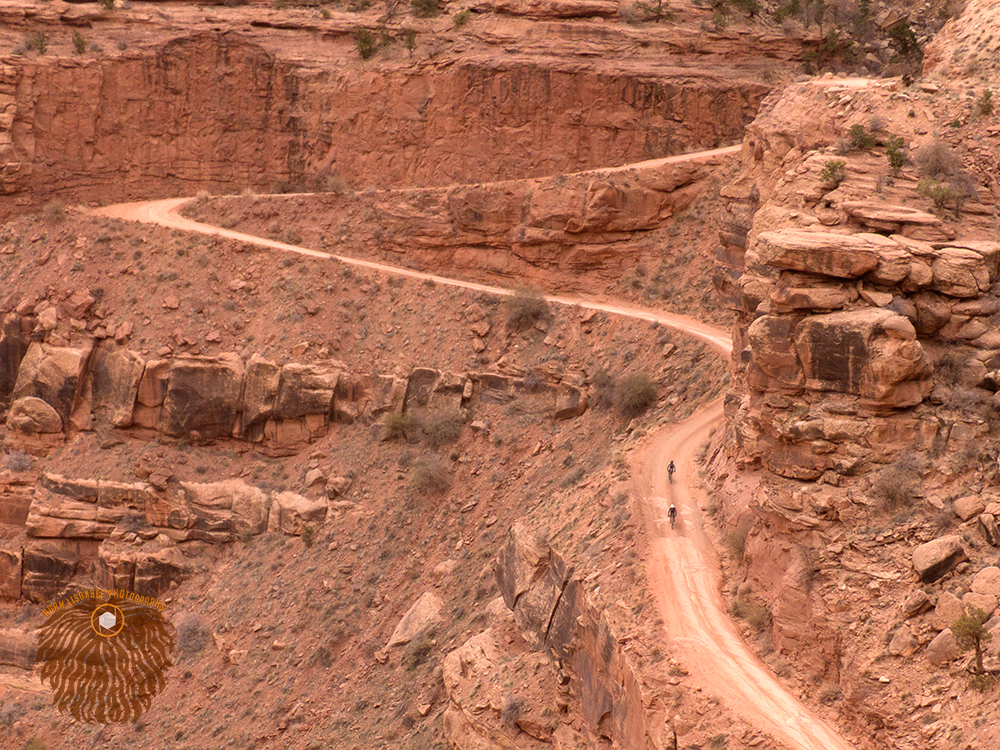 You took off ahead of the bunch while your riding buddies re-grouped. You had a plan to get a great photo of the riders cresting a beautiful spot on the trail. You know the place–perfect singletrack, a snow-capped mountain in the background, just the right amount of leafy trees. When you arrived at the place, you tossed your bike into the bushes and quickly pulled out your smart phone and waited for your partners. And when they arrived, you snapped off a few frames. Afterward, you excitedly swiped through the photos while visions of Instagram glory swirled through your head.

Except, the photos sucked.

The riders were blurry. The sky was washed out. The framing was off.

But you posted them anyway. After all, gotta prove you went for a ride, right?

I’ve been there, done that. We all have. The Internet is flooded with bad mountain bike pictures.

But we can change that!

The easiest way to become better with a camera is to learn how a camera works.

Aperture: The “eye” of the camera. A wide aperture will let in more light, and have a shallow depth of field (smaller plane of focus). The smaller the number, the wider, or faster, the opening. For example, an aperture of 1.8 will be very wide open, and will blur the background of your photo. Shooting with a wide aperture is a common technique in portrait and nature photography tips. A small aperture, 10 for example, will allow less light onto the sensor, and will have more depth of field (more of the frame will be in focus). Small apertures are common in landscape photography because the entire scene can be captured in focus.

ISO: In the olden days, when people used film to make pictures, ISO settings were baked into the film itself. A film might have an ISO of 200, or 800. ISO determined the light sensitivity of the film. A lower number (200) film was less sensitive to light than a higher number (800) film. Digitally, the concept works the same, except that ISO is adjustable in-camera and determines the light sensitivity of the image sensor. Shooting at a high ISO, such as 1600, will improve low light performance, but will also produce more grain (noise) in an image.

Aperture Priority: Your camera might have an “A” or “Av” auto mode. This is a semi-manual setting that lets you choose the aperture, and the camera will set the shutter speed.

Shutter Priority: Noted as “S” or “Tv”, shutter priority will allow you to set the shutter speed while the camera automatically determines an aperture value. 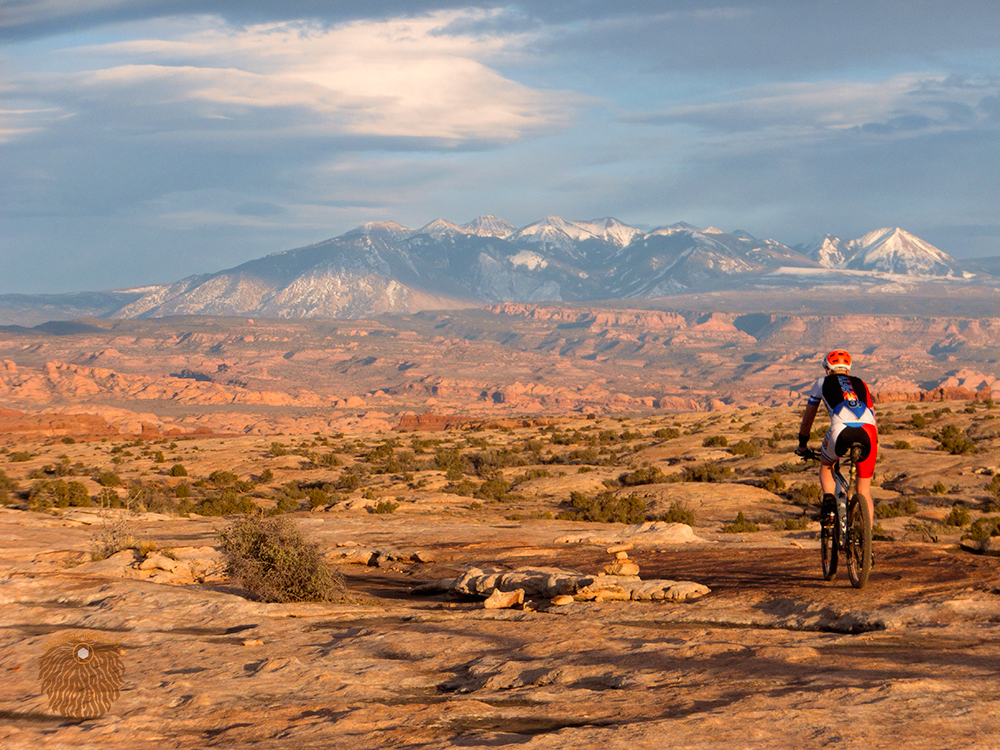 Step 2: Get A Real Camera

You don’t need an expensive DSLR to take great pictures. But the camera built into your smartphone isn’t getting the job done. Oh, it’s possible to get a nice picture with an iPhone*, but only when conditions are perfect. To take full advantage of the great terrain you ride in, you will want a camera that acts like a camera. Save the phone for shooting shaky, vertical videos. Everybody loves those.

*If you insist on shooting with a phone, fine. The following information is relevant, and will improve your phone pictures too.

A compact Point & Shoot camera can do amazing things. Get a superzoom pocketable P&S with built-in WiFi, and you will become an Instagram rockstar. To make my point, every photo in this post was shot with my Fujifilm F900EXR pocket superzoom. You can achieve similar (or better) results with the camera you probably already have. Or, for the price of a set of tires you can get a nice camera that fits into a jersey pocket and weighs less than an inner tube. Ditch the smart phone “camera” and start shooting with a real camera. You won’t be disappointed.

Once you figure out how to use your camera, and your images improve, you will stop more often to take pictures. That’s because taking great photos is addictive. Don’t worry though. Your photos will be far more interesting to your virtual friends than your Strava KOMs.

Step 3: Learn to Use that Real Camera

Read your camera’s user manual. Seriously. Learn to use your camera. Fiddle with it. Learn what the different shooting modes do, and figure out which one is your favorite. If your camera has manual controls, play with them until you understand what adjustments to aperture, shutter speed, and ISO do to your pictures. Find the manual, read it, and keep it handy. Above all, shoot. And then shoot more.

Nail your focus. Use your camera’s auto focus features. AI-servo is a great method for keeping moving subjects in focus. But if you don’t know how to use that feautre, or your camera does not have it, then pre-focus your shot (by pressing the shutter button half-way down, most cameras will “beep” when they’ve locked focus. If you missed, just try again) by using a rock, tree, or the ground where your subject will be riding. For example, in the shot below, I pre-focused on the trail, just where it vanishes out of sight. I knew that the rider would be about the same distance away from me when he crested the hill. Pre-focusing will help you get sharp photos of riders, rather than backgrounds. This takes practice, but that’s okay. You want to get better. That’s why you are reading this right? 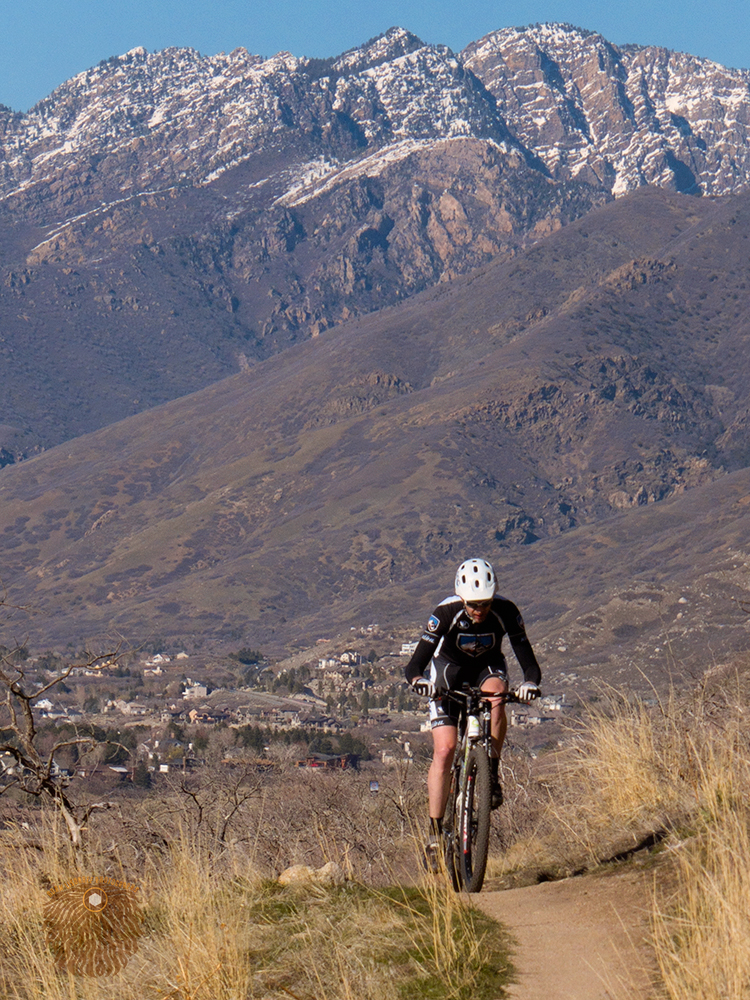 Step 5: The Rule of Thirds

What, rules? I hate rules! Yeah, so do I. But this is an important one. The Rule of Thirds is pretty simple. Instead of framing your subject dead center, put it into a third of the frame. In other words, you don’t need that much head room, or so much sky (or ground), or all that empty space. Move a little to the left, to the right, up or down. Your picture should lead a viewer through the frame, and contain interesting information throughout. Of course there are exceptions, but in general, dividing your photo into thirds will greatly improve your framing.

The trail and terrain you ride on will provide great opportunities to frame your picture. Trees make great edges. The trail can divide a frame beautifully. Incongruent mountain skylines, wide desert vistas, and wooded forests should feature in your pictures, rather than be relegated to happenstance backdrop. Use a huge landscape to show the smallness of a rider, for example. Instead of putting your rider into the middle of the frame, pan left a touch and let the viewer see more of the aspen forest he is riding through. Be creative. Be an artist.

Use that superzoom! Zooming into a rider can bring the backdrop closer, creating a parallax look that works wonderfully in the mountains.

Us a wide angle to capture big landscapes, or to shoot riders twisting through tight switchbacks and forests. When shooting with a wide angle lens, be sure to have something interesting in the foreground of the photo. And remember, just as zooming in will bring backgrounds closer, a wide angle will push them farther away.

Get off your bike. Move away from the trail. Climb a rock or a stump. Squat, sit, lie down. Shoot down on a set of lower switchbacks. Shoot across a canyon at another trail. Shoot through trees, or from small rises in the trail. Constantly be on the lookout for good points of view and catalog them away in your head for future shooting. 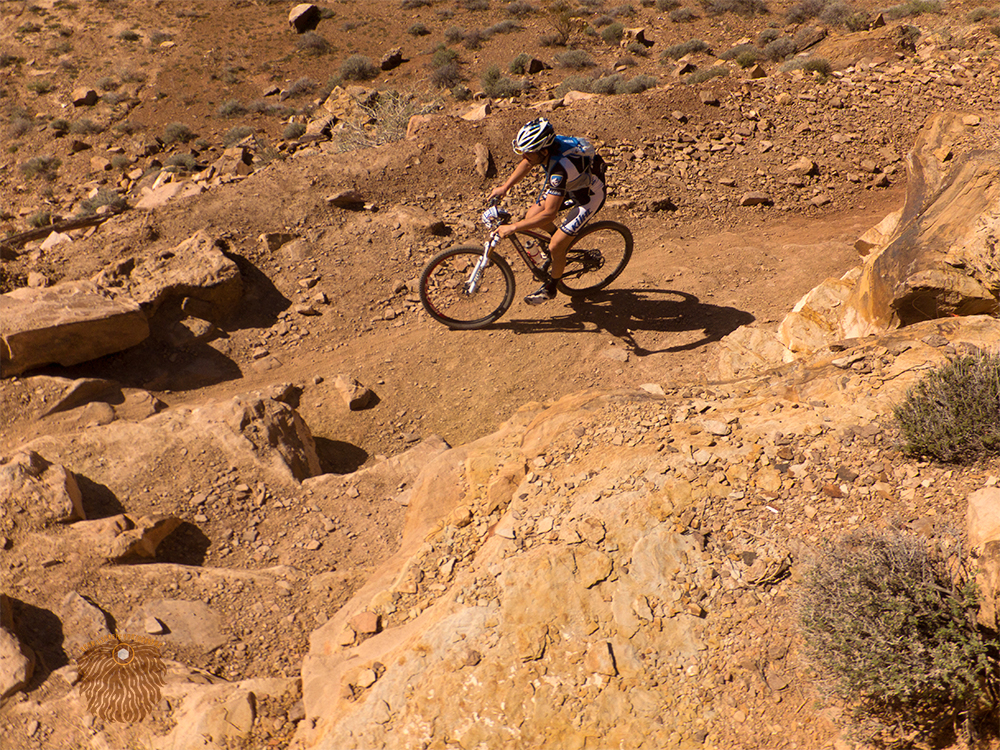 Every photo can benefit from a little TLC. I have two primary methods of post-processing. I use Photoshop for most of my picutres. But sometimes I am away from the computer, but would still like to post a photo from a ride . In that case, I use the WiFi on the F900EXR to send a photo or three directly to my iPhone. Then I will use whatever my current favorite photo editing app happens to be to touch up the image. Right now I love Afterlight and Mextures.

Be gentle to your photo. Slight adjustments to brightness, contrast, exposure, and vibrance make a big difference. Sometimes a default Instagram, Twitter, or Facebook filter works great too. But a filter should help convey the overall mood or tone of your image, rather than overpower the story and subject. The filter is not your subject. Do just enough, whatever that might be.

Crop and “zoom” with your editing app. The right crop (remember the rule of thirds) can add drama and emphasis to your picture. 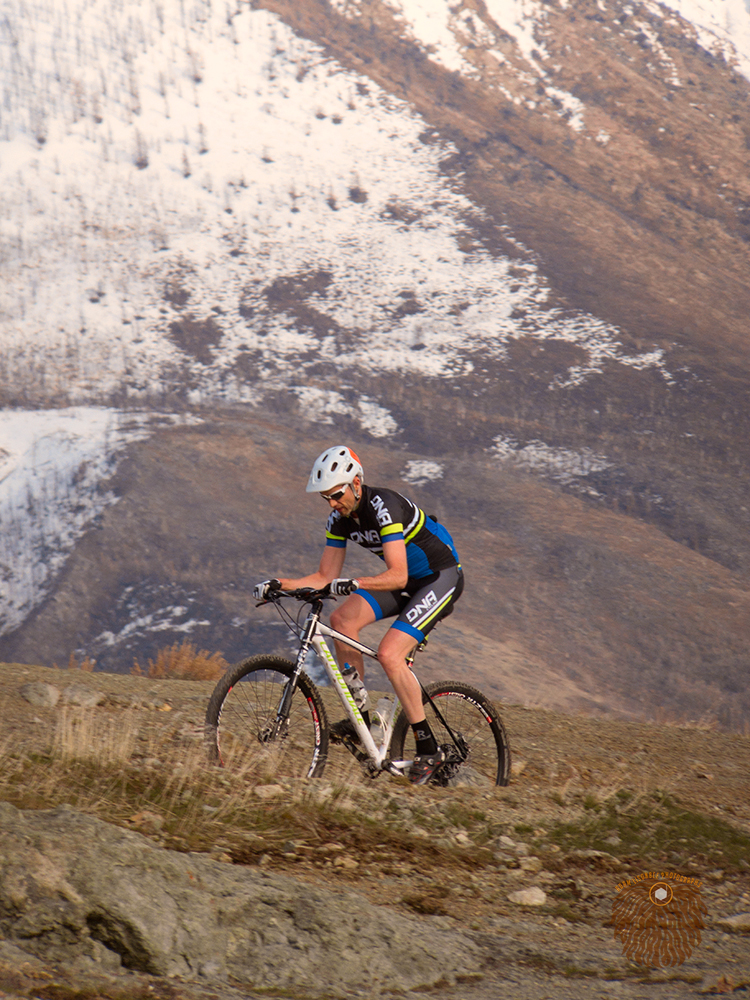 Ask yourself: Do my followers want to see this photo? Post your best pictures. That doesn’t mean everything has to be gallery quality. Post photos that make people stop scrolling, look, read the caption, and double-tap. Make pictures that tell a great story and that put viewers into the frame. Your photos should make people stop whatever they are doing and say “screw this, I’m going for a ride.”

Instagram is neat. Use it. Share your wonderful pictures. Make other people think that your life is better than their vacation. Inspire folks to ride. Or hike, or whatever it is that they love to do. Share often, but don’t make people ignore you because you are sharing too often. Your goal should be to make other people’s day a little better. A picture can do that. That’s why 2 zillion people use Instagram and other social networks. Everyone is looking for ways to make life a bit more enjoyable. You can help them with great pictures from great rides.

If you want to take great mountain bike pictures, you need to become as obsessed about it as you are your training numbers. Sometimes you will have to hang back from the group to get the shot. And other times you will need to hammer out in front of them. Don’t be shy about asking your friends to re-ride a section of trail or to help out with staging a shot. The only thing mountain bikers love more than Strava KOMs is getting their picture taken.

Now go. Make amazing pictures. Your friends will appreciate it. And together we can rid the world of bad mountain bike photos. 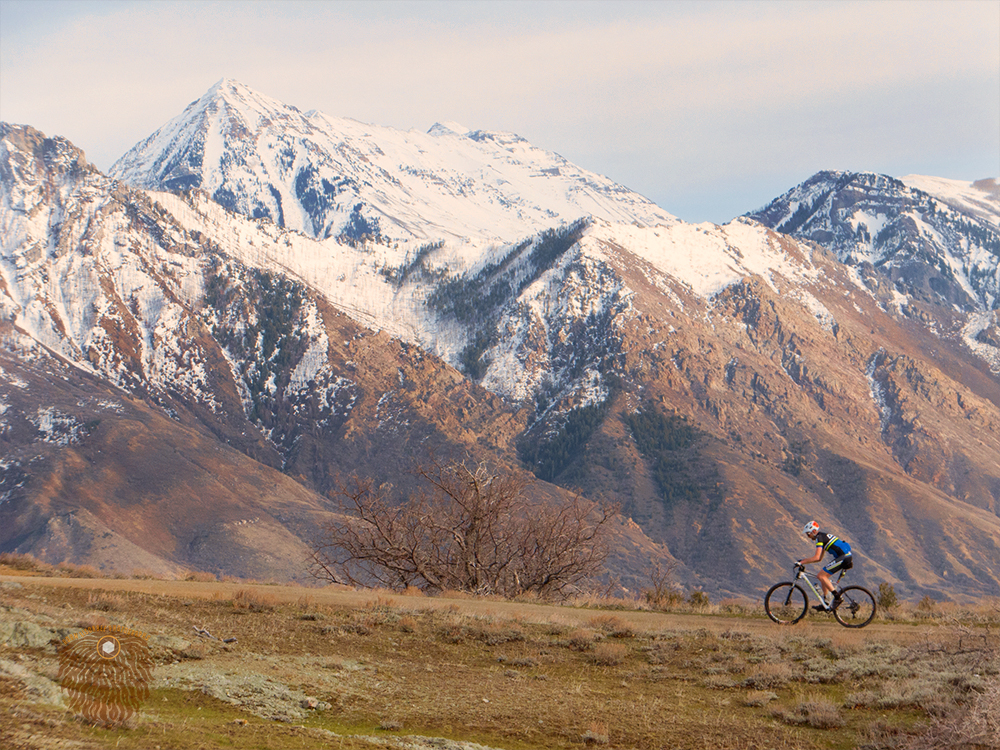