“There can be no other life for me but that of the lone wilderness wanderer. It has an irresistible fascination. The lone trail is the best for me.”

A voice crackled over the radio. Expect delays it said. There’s been an accident on the road it said. In the construction zone.

I shook my head. Brake lights lit the night in a red-orange gloom. Six lanes of traffic went nowhere. I felt guilty. Someone could be hurt.

An hour later I passed by the accident site. It wasn’t serious. Just inconvenient. A half-hour after that I finally arrived at home. The kids were bored. I was agitated. Dinner was cold.

She was not surprised. She knew it was coming. I had not been happy in my work. I would have quit long ago had I not been so afraid of the dark.

It wasn’t a bad job. I just wasn’t any good at it.

“What are you going to do tomorrow?” My wife asked me.

Into the Grand Staircase-Escalante National Monument

It was a text message from PhD.

My truck was loaded with gear: Three bikes. Food and water for 2 days. Bivy sacks, sleeping bags, rain jackets, spare tubes and chain links. And everything else we’d each need for 2 days in the remote Grand Staircase-Escalante wilderness.

Paincave had never bikepacked before. He was right to be nervous. But PhD was right too. It was just a bike ride.

I thought about the first time I strapped sleeping gear, food, water, and a repair kit to my bike and set off onto an unknown trail. I was nervous then. I was nervous now.

Leaping into the void is always nerve-racking.

I survived that first trip. That was years ago. I’ve since pedaled through the deserts of California and Arizona. I’ve seen the hoodoo rocks and monoliths of Southeastern Utah. I’ve crossed Colorado twice. I’ve ridden in Wyoming, Idaho, Montana, Alberta, and British Columbia.

But none of that ever seems to matter the day before another trip. No matter how many miles are behind me, it’s the miles ahead that frighten me.

Did I bring enough food?

“I don’t have you on the calendar.” The girl behind the desk at the Lamplighter in Panguitch, Utah looked at us matter-of-factly.

We looked at each other.

At least it wasn’t a queen.

Another text message buzzed the phone.

“We will meet you at the trailhead in the morning.”

It was the Engineers. Two brothers. Neither of them drive trains, however. Something to do with code and computers.

This one was from TRex. He’d driven from Denver.

PhD and I walked across the street to a dollar store. I bought Zingers and Twinkies. He bought cookies. I ate the Twinkies and regretted it immediately. To undo the regret, I ate the Zingers.

We woke with the dawn and ate a gas station breakfast. Outside, frost rimmed the windows. I scraped ice off of the windshield. We climbed the plateau. At the top, it was 19 degrees.

“We could always just get a couple of rooms at Ruby’s Inn and sit in the sauna all day.” I suggested.

Ruby’s Inn is 100 years old. It’s also the best hotel within 100 miles. It has a restaurant and a gift shop with 400 different belt-buckles for sale. It was just up the road.

“You’re the scientist.” I said.

The Engineers and TRex were waiting for us at the trailhead. We quickly readied ourselves to ride. The sun was out, but the morning was cold. We left the trucks behind anyway.

We were on our own.

In this remote corner of Utah there is no cell service. No LTE. No dollar stores or gas stations. There are more mountain lions than people.

The road ahead was lonely and rugged.

I took a deep breath. I smiled. The stress of work and traffic dissipated. The lingering questions that had no answers would have to wait. For now, it was just the bike and the trail. The desert and the wind.

The crumpled mesas and folded hills stretched from horizon to horizon. Mountain lions and deer left footprints in the soft sand. Birds flittered from treetop to treetop. Clouds passed overhead, like a time-lapse movie.

The world slows in the desert. Time becomes meaningless. A day is nothing. A week, a month, a year are mere moments. The desert was made – is being made – by incomprehensible eons. 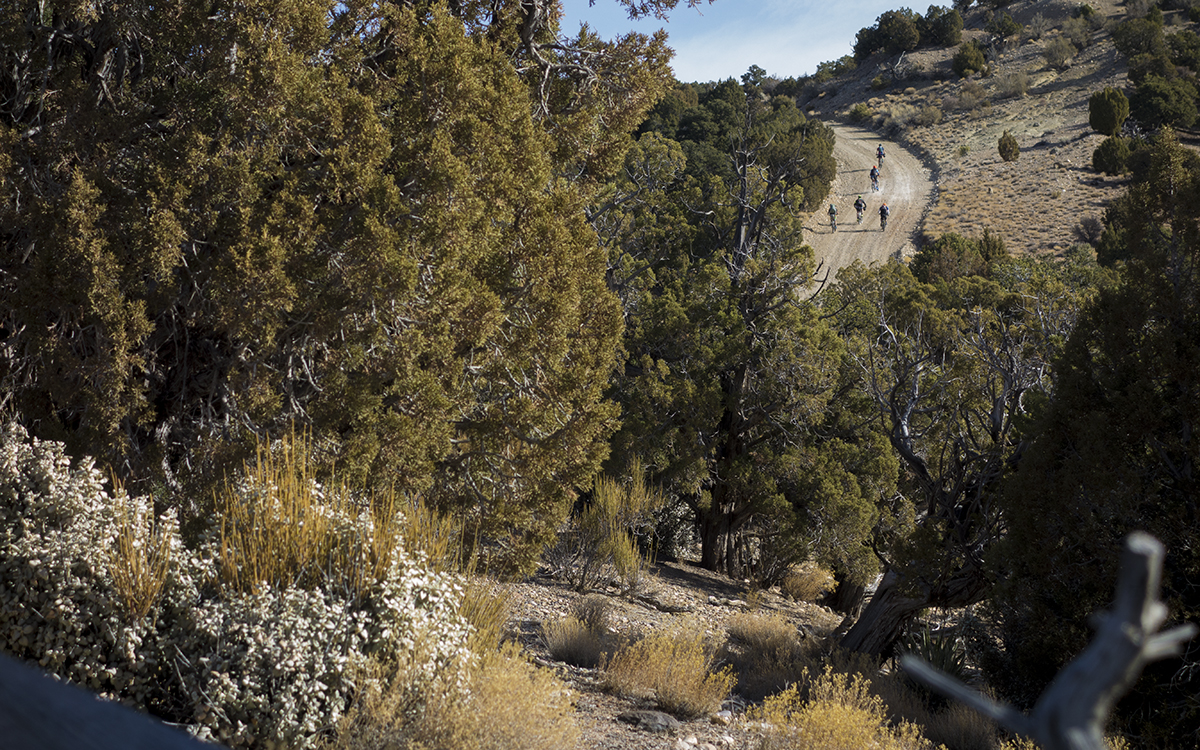 We were like wind passing under stony ledges and over honey-colored sand. Our tire tracks vanished under the shifting sands. The group stretched thin. The afternoon warmed.

Long plateau tops were interrupted with sudden drops into wooded, chilly drainages where crunchy snow lingered in the shadows.

After an equally sudden, but far slower climb, we’d once again gain the top of the mesa. Up. Across. Down. Forever.

“We need to get off this mesa before it gets dark.” PhD said.

“We’re still at 7,000 feet.” One of the Engineers said. “It’s going to get cold up here tonight.” Engineers are obvious.

“We should probably stop talking then, and get moving.” I said.

Paincave vanished over a small rise, and into the waning light. TRex and I had a snack. PhD and the Engineers trailed after Paincave.

We knew that we’d drop elevation soon. We just didn’t know how soon. The first 45 miles of this route took us far longer than we had anticipated. Instead of sleeping on the shores of Lake Powell, we were going to have to find someplace trailside.

“We never learn.” I said to TRex. “We always think that we will make it so much farther than we ever do.”

He shrugged, smiled, and pedaled. 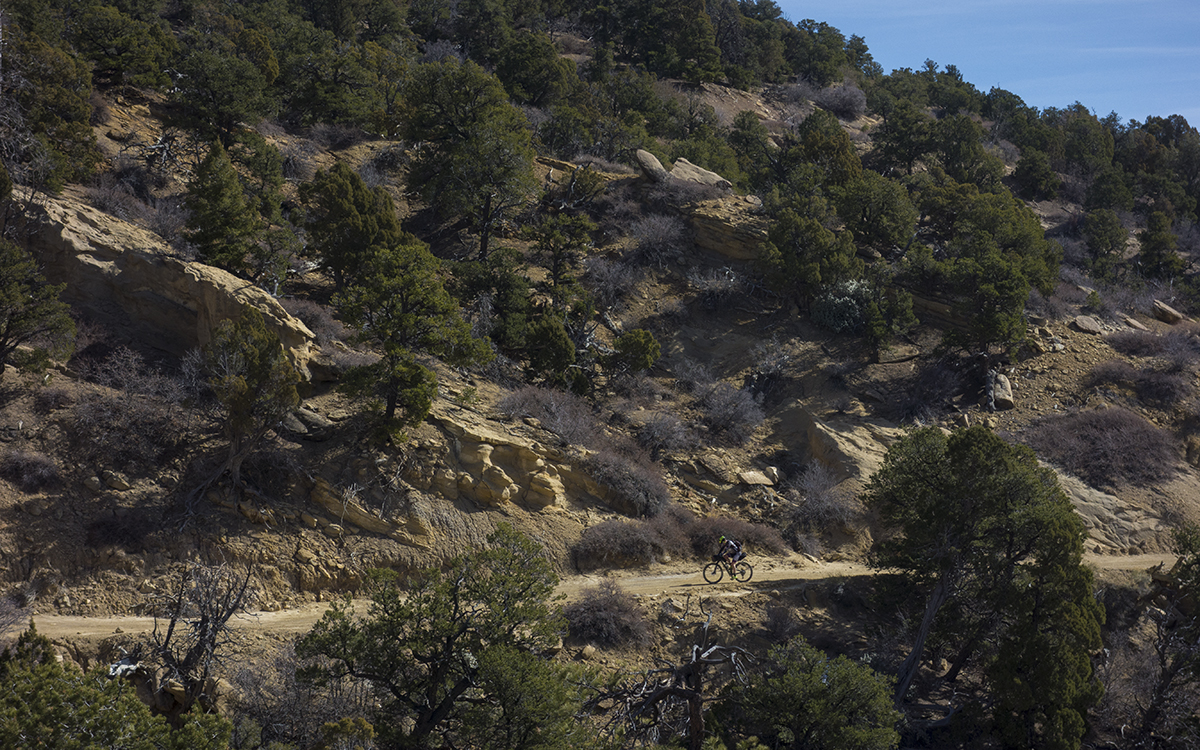 Bikepacking has no deadlines. No status reports. No meetings to discuss progress or strategy. You’re either done with the route, or you aren’t. And if you’re not done, then the strategy is obvious: Keep pedaling.

Just before sunset, we were at the top of 10 miles of smooth, glorious downhill. Salvation. We made up lost miles and dropped 2,000 feet off of the mesa top. We found a sandy, nearly level place to make camp.

Juniper bushes sheltered us from the wind. A fire crackled against the night’s chill. Stars splattered the sky like spilled glitter.

I ate a handful of pepperoni, a Snickers bar, and drank warm, sandy water. A desert feast.

I stared up at the stars. And I wondered, not for the first time if I were making a terrible mistake. It was a good job.

But I also felt relief. The uncertainty I grappled with was not coming from my decision to leave. It came instead from the unknown that lies ahead.

It’s the same insecurity that pushed me off-route in the Tour Divide. It’s the same fear that causes anxiety and doubt during any bikepacking trip.

What if it rains?

Will there be snow in the passes?

When will this climb end?

What if the road is sandy, or too rocky, or rutted with ditches?

I have to see the end from the beginning. Or, I’ve told myself that. But it isn’t true. The end can never truly be seen. Plans are made. Maps are drawn. Schedules are written. But they never hold up. Nothing ever goes the way it’s supposed to go.

Bikepacking has taught me that that’s alright.

Of course, things get screwed up. That’s why I’ve got extra food and water, layers, and a repair kit. That’s why I have a GPS. And it’s why I am here with friends.

I drifted into sleep. The night was quiet. No wind. No other campers for a thousand miles. We might have been the only people on the planet. Armageddon might have arrived. We wouldn’t have known. We were tucked into a sandy wash in a forgotten corner of a forgotten corner. 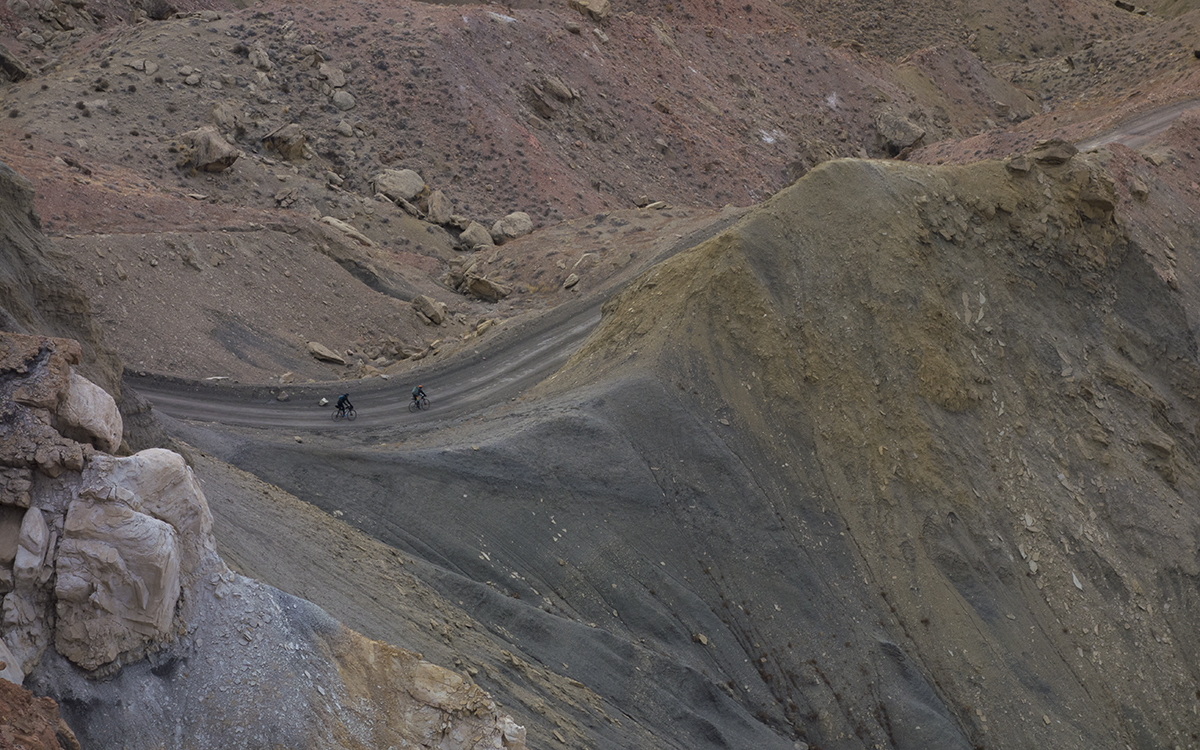 The Engineers were talking loudly.

Already? I wanted to stay in the cocoon. Warm, safe, protected. Out there I would have to ride again. Out there were more rocky roads and steep climbing. There were headwinds and sand. Miles upon miles of unknown, uncertain trail yet remained.

I rose into the frozen dawn and shivered like a leaf in the wind. A faint breeze moved the treetops.

I climbed out of the bottom of the wash that was our temporary home. My heart thumped at the rude and sudden wake-up call. My legs ached in protest. The chain on the bike creaked like an old man’s bones.

But then the first light of morning filled the sky with technicolor wonder.

And all the sand I had eaten was forgotten.

So too were the aches and pains.

And the sore legs.

And the nagging doubts.

Nothing else that might have happened that day mattered. It’d all be worth seeing that sunrise, from that place.

Moments later it was gone. The color. The silence. The clarity. All gone. Uncoiled in front of me was just a sandy, straight, dirt road. It was time to get back to work. 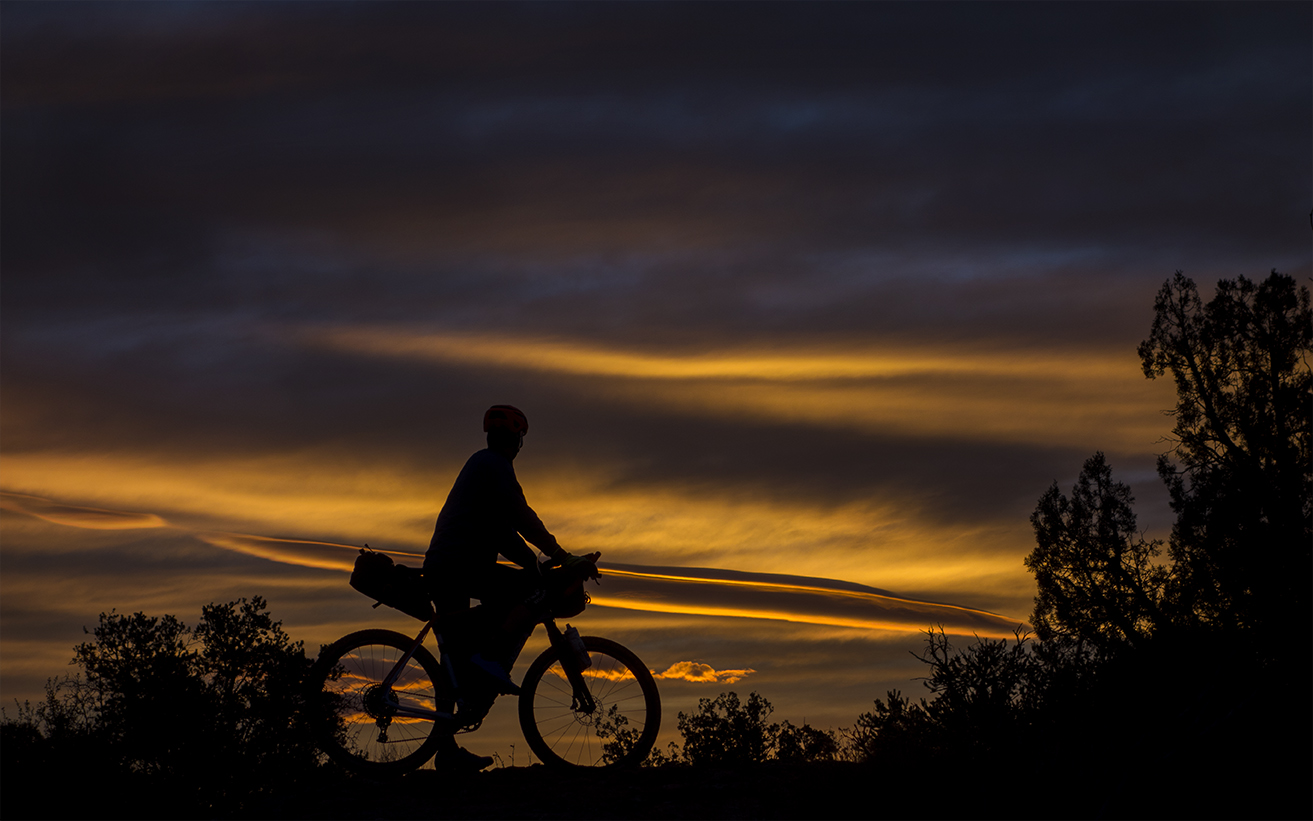 The sun was blazing above the top of the rim when we fell off of the mesa and into the basement of the low desert. We plunged off of the famous Smokey Mountain Road. Lake Powell glimmered in the distance. Somewhere among the folded, tawny landscape below was Big Water, Utah.

But water was all that Big Water had to offer.

That, and working toilets.

For the next 6 hours, I swallowed sand. I also hiked through sand. And had sand sting my eyes and scour my skin.

A brutish headwind pushed me around like a schoolyard bully.

I climbed to the top of yet another mesa. The wind howled like a moon-touched wolf. Sand swirled madly. Cattle hunkered down against fencelines and under the limbs of sporadic juniper bushes.

The Engineers were long gone up the trail. Paincave too. I toiled relentlessly up the road with PhD and TRex. Nobody said much. We had to shout above the wind to be heard. And that was just too much effort.

Clumps of dirt and sand were whipped into frenzied fits that pelted us in the face like needles blown from a shotgun. My teeth were gritty. A bitterness lingered in my mouth.

“I’m going to see if I can catch Paincave.” PhD said. Before anyone could respond, he was riding away from us. Soon, he was a spec on the dusty horizon.

The rolling hills and open plains gave way to crumpled canyon walls. The wind persisted. Somewhere up the road was the truck. The finish. The end. 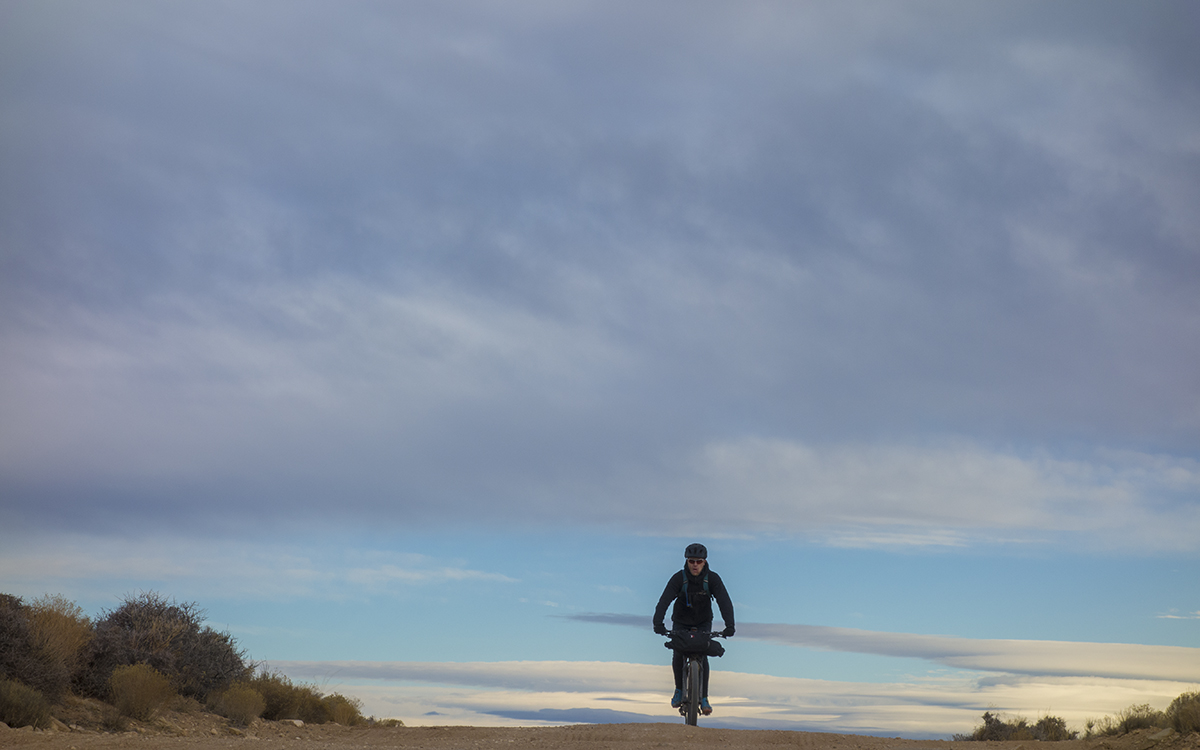 Bikepacking, like anything else, is easy when it’s easy. Coasting downhill on smooth dirt makes for fast miles and big grins. Riding with a tailwind feels like cheating.

But tailwinds and gentle descents don’t make us stronger. They don’t scour our faces with sand. They don’t polish the dross. And there’s never anything rewarding at the end of anything easy.

I saw the truck long before I arrived at it. TRex and I pedaled energetically toward the white dot among the sage brush. Grosvenor Arch loomed overhead, bathed in the last light of day.

An hour later we were at Ruby’s Inn eating meat and potatoes and swilling Coke.

But we didn’t care.

We didn’t care because we’d finished what we’d started.

We survived the relentless rolling mesas and the rocky roads. We’d made it through yet another night in the dirt, cold and dark.

We rode through a bully headwind and ate sand.

We rode our bikes through the Grand Staircase-Escalante National Monument.

For the smiles at the finish line.

For burgers and Coke at a far away outpost.

But mostly, we did it for the experience.

“How was the desert?” My wife asked me.

And now, with all sorts of uncertainty ahead, I will pedal confidently into the unknown. 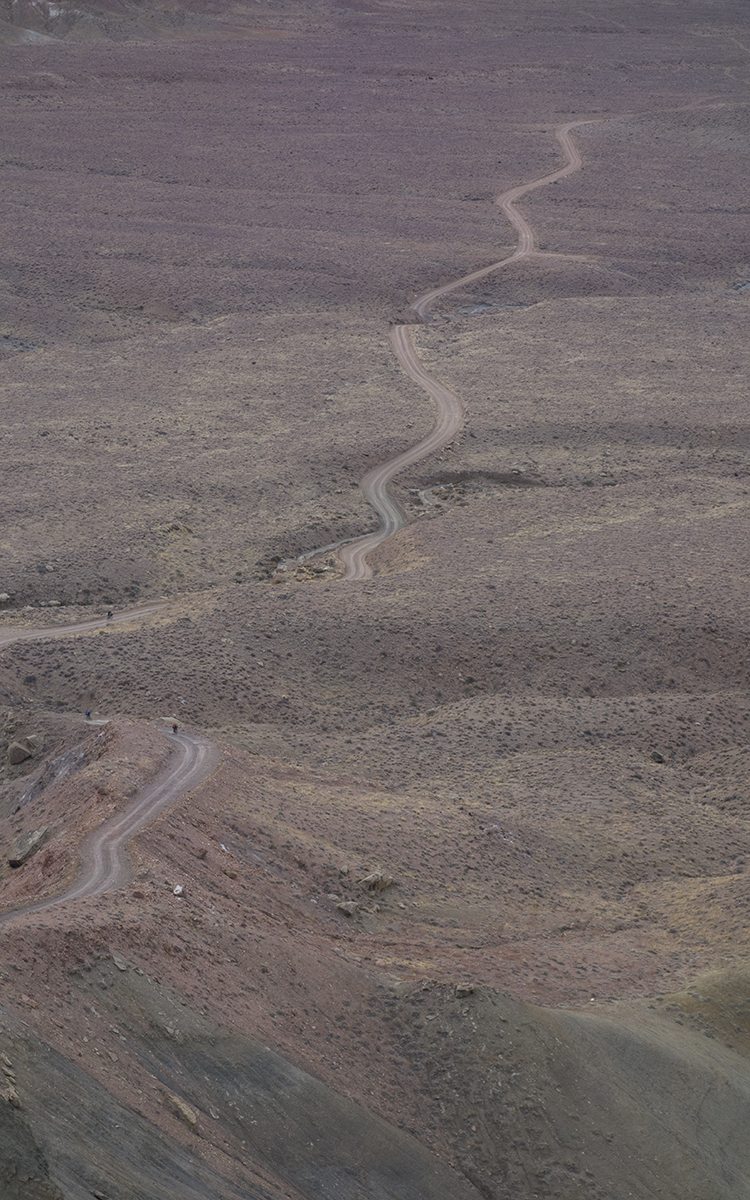