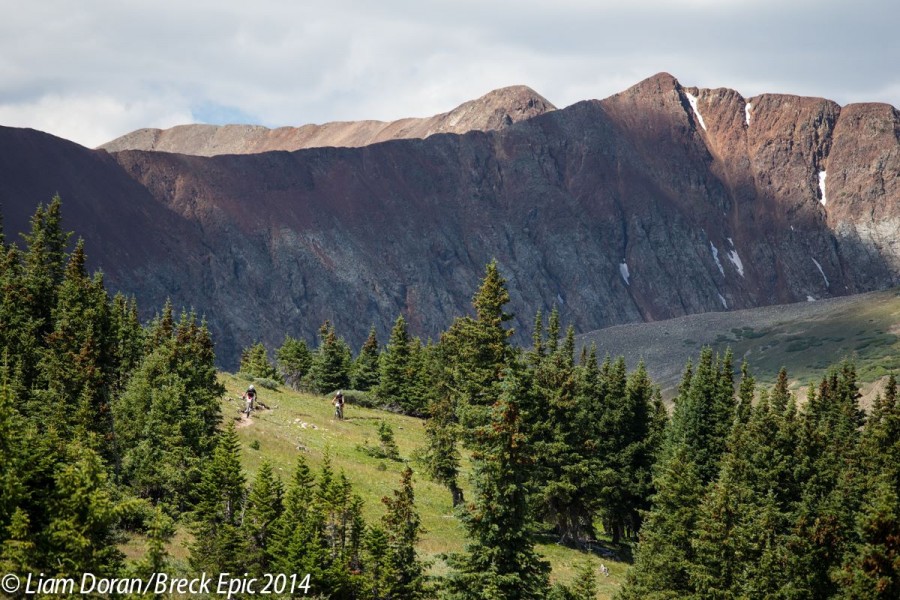 No place to hide.

Every day at the Breck Epic is a mountain stage.

Every day is a lonely race to the top.

An angry rumble echoed through the mountains. Dark clouds swirled around the snow-covered peaks. Rain fell in sheets. A shockwave of nervous anticipation buckled my knees. I watched the storm roll across the mountain valley from the rickety balcony outside the Breckenridge condo that was to be my home for the next 7 days. “What have I done?” I wondered.

Tourists scurried through the rain, hurrying from souvenir shop to souvenir shop. Crowds gathered in restaurant lobbies waiting to be seated. The rain slowed, and soon stopped. Evergreen trees dripped. Pine scent wafted through the air. Pull-apart clouds moved beyond the peaks and revealed the craggy domes. Sunshine streamed through the fog in golden, illuminating pillars of warm light. Steam rose from the newly bathed ground.

Mike McCormack, the founder of the Breck Epic, was on stage at the orientation meeting. Flighty bike riders fidgeted in their seats. Everyone was eye-balling everyone else and wondering how they’d stack up to the competition. I looked around the room and was mildly disheartened. Everyone was fit. They all looked how fast bike riders look. Lean. Veiny. Light. Determined. Another shockwave streaked through my spine. People spoke in German, Spanish, Italian, Japanese, and languages I couldn’t identify.  “What have I done?”

6 days is a long time to race a bike. I know that from experience. But the Breck Epic is not the Colorado Trail Race. It’s easier. And harder. Different. The Epic was going to require more focus. More intensity. More racing. Was I prepared? I had trained well. And I had rested well. But looking around the room at the other racers it was obvious that so had everyone else.

Uncertainty flooded my mind and heart. Maybe I wasn’t ready. Maybe I hadn’t trained enough. Or did I train too much? Was my bike going to work for six rugged backcountry courses? The last time I tried to cram 20 training hours into a week hadn’t gone well. In fact, it had derailed the rest of my season. Was the Breck Epic going to crush me? It might. “But that’s why I am here.” I told myself. “To find out.”

The crackle of the microphone interrupted my thoughts.

My stomach soured. I twitched. A low rumble of thunder played across the mountaintops.

The Breck Epic was born out of disgust. Or frustration. It was a response to what mountain bike racing was becoming—had become. Overly governed. Expensive. Sanitized. Dominated by cheaters, liars, crooks, and  thieves. The Breck Epic is an attempt to restore that old-school spirit “when mountain biking was about big rides with friends. About lending a hand when a rider went down. About a shared experience that somehow, flying in the face of all logic, disproportionately enriched all involved.”

It’s a race. And it’s competitive. But it’s also an adventure. A once-in-a-lifetime week of ride, recover, ride. Anyone who mountain bikes has dreamt of spending a week (or longer) riding every day on some of the best trails in the world. No work to worry about. No conference calls, meetings, deadlines. Just the bike, food, and good people. That’s what the Breck Epic is. Six days of intense (or not) racing, followed by food and rest. Ride, recover, repeat.

“In a bizarre way,” reads the Breck Epic website, “we have the assorted governing bodies to thank. Their pleated-chino-tasseled-loafer-old-boy’s-roadie-club management of mountain biking was so offensive, so galling, so criminal to us that we took it upon ourselves to do something about it. The result? A 6-day race that lives among a small but thriving handful of kick-ass bucket-list races.”

It sounded perfect to me. Maybe too perfect. Did such a thing—a race that entailed everything that I love about mountain biking—really exist?

I only knew one way to find out.

I awoke long before my alarm did. My stomach was in knots. I went to the bathroom to throw up. Nothing happened. I tried to go back to sleep. But that didn’t happen either. Instead, I tried to eat. The sky outside was pale, and strung out with gray clouds. Rain was forecasted for later in the day. How wet would I get today? I gagged on a blueberry muffin. “Aaack.” I washed the muffin down with some green tea. In the kitchen, Ty Hopkins gagged down his muffin. We exchanged knowing glances. Neither of us spoke.

I pulled on my kit. Vest, no vest, vest, no vest? I put the vest on. The room spun. I tried to forget about my breakfast, and the looming race by distracting myself with mundane tasks. I lubed my chain. Wiped the downtube. Made sure bolts were snug, tires inflated, bottles full, flasks ready. I snapped my helmet on. Gloves. Shoes. There was nothing left to do.

“Racers, are you ready?”

The energy at the start-line could have powered a small city for a year.

Butterflies bounced around my unsettled gut.

I gave myself one final pep-talk. “You are ready. You are happy. You live for this.” The butterflies surged and I nearly puked. And then they were gone.

I’ve never been a goal-setter. Not in the New Year’s resolution, write it down, check-it-off, sort of way. I don’t have a 5-year plan. I don’t use to-do lists, planners, or calendars. I live a little haphazardly. Come what may. It’s a good way to live. Bosses don’t like it. But I’m not a boss. I hope I won’t ever be. Except my own.

Bike racing is a little different. I have check-lists. A plan. Goals. Bike racing comes with built-in deadlines. And so I plan and scheme and work toward those deadlines. Maybe if I treated real life like I bike racing I would be a boss. But then I wouldn’t have time to treat bike racing the way I should treat a job. See the problem? Neither do I.

The Breck Epic has been on my to-do list for years. The moon and the stars and the sun lined up in 2014. It was now or never.

I spent the year learning how to race on back-to-back-to-back days. I had good fitness, but my results were mediocre. Finally, a couple of weeks before the Breck Epic, I stopped riding. I slept. A lot. And when I wasn’t asleep, I pretended I was asleep. I rested. Recovered. Tapered. And something funny happened during all that resting. I lost a few pounds. And I felt mentally and physically rejuvenated. Maybe all those coaches that preach about recovery know what they are talking about?

I drove to Breckenridge ready to crush.

Everyone was smiling. Hugging. High-fiving. We had done it. Survived. Thrived, even. The Breck Epic was finished. And everyone who crossed that line had 240 reasons to celebrate.

I was bruised and battered. The racing had been furious. The trails, rough and rocky. And everyday had been a challenge. But everyday had also been a joy. Steep climbs were followed by no-brake descents. Rough patches of trail led to hero-dirt. And everywhere there was beauty. Snowy peaks. Dense forests. Wildflower filled meadows.

And my goals for the race? Forgotten about after day 1. I was having too much fun to worry about heart rates, standings, calories per hour, or all the other things I thought were important. Instead, I just focused on pedaling as fast as I could each day. And somehow (as painful as that was) doing that made everything else fall into place. But most of all, pedaling as fast as I could made the race fun. Old-school, no-strings-attached, playful fun. Just like mountain biking is supposed to be. Just like it’s always been.

I set out to challenge myself. I wanted to ride big, burly rides every day. I wanted to compete in my group. I did those things. But those initial purposes faded into the background. The Breck Epic is about meeting friends, chasing them around the mountains, and making them (and you) better bike racers.

What’s the best bike race you’ve ever done? Now do it every day for a week. That’s the Breck Epic.

Rain fell from the sky again. The crowd of racers dissipated. The eating and drinking and back-slapping were done. Breckenridge was in the rear-view mirror. Bittersweet.

I was tired. But I wanted to keep racing. I wanted to put off the inevitable return to real life.

I wanted to stay a Breck Epic racer forever.