The Tour Divide is Simple

The Tour Divide is Simple

Trucks roared by throughout the night. It was almost impossible to sleep. I tossed and turned inside my bivy. The night was hot and still. My inflatable air mattress was flat. I re-inflated it, only to discover that all the air I was blowing into it, was escaping. After a few more futile attempts, I gave up. The cold ground, and sharp rocks made sleep even more unlikely.

We had only ridden 35 miles of our intended 150. But the sun had dropped behind the mountains, and riding 2 miles on the crowded, narrow highway in the dark was not an attractive proposition. So we camped on rocky, forsaken, no-man’s land among discarded beer bottles, empty shotgun shells, 5.56 ammo and trash bags. Had we ridden the road, we could have slept on the soft, green grass near the Reservoir visitors center. Trade-offs are a bikepacking staple.

The 35 miles behind us were some of the rougher, tougher miles of the route. Due to our late afternoon start, we knew that day 2 was going to be long. Ahead were 115 miles of remote Utah dirt roads that contoured across dusty plateaus and through aspen forests. The bow-hunt opened Saturday morning. The hills crawled with camouflaged warriors riding ATVs. The deer, it seemed, would have the advantage.

After the restless night in the rocks, I ripped my stuff sack in two while packing my quilt and bivy. So much for ultra-light and expensive. I made due. But so far, this trip was not adding up.

Bikepacking is a wise teacher. The essential lessons of life are front and center, impossible to ignore. The constant, nagging doubts that scream for attention while riding have to be quieted. And thus, we learn to keep them quiet in our day-to-day lives. Life on a bike is simple. Not easy. But not complex. Ride. Eat. Sleep. Along the way,  we are forced to deal with the unpredictable weather, terrain, and wildlife. But, during those unforeseen dilemmas only three options are present: ride, eat, sleep. It can be a near-ascetic existence. Everything you need is in your bags. Indulgences are simple, needs are few.

The late August sun had found us. We were high up on the Wasatch Plateau. Far below, Strawberry Reservoir was a distant, shimmering blue. We’d be riding along its shores soon enough. But right now, right now we had to climb another hill. We rode through aspen groves, and sage meadows. Here and there, camp trailers that had been dragged up rugged roads by big trucks sat empty, their owners stalking deer in the trees. Upward, flirting with treeline, upward, into the thin air of a Wasatch summer. And then the mountain vanished before us. The earth fell away steeply. Minutes later, the hours of climbing were erased.

Ice cream and soda were found at the bait shop. Water and shade, too. 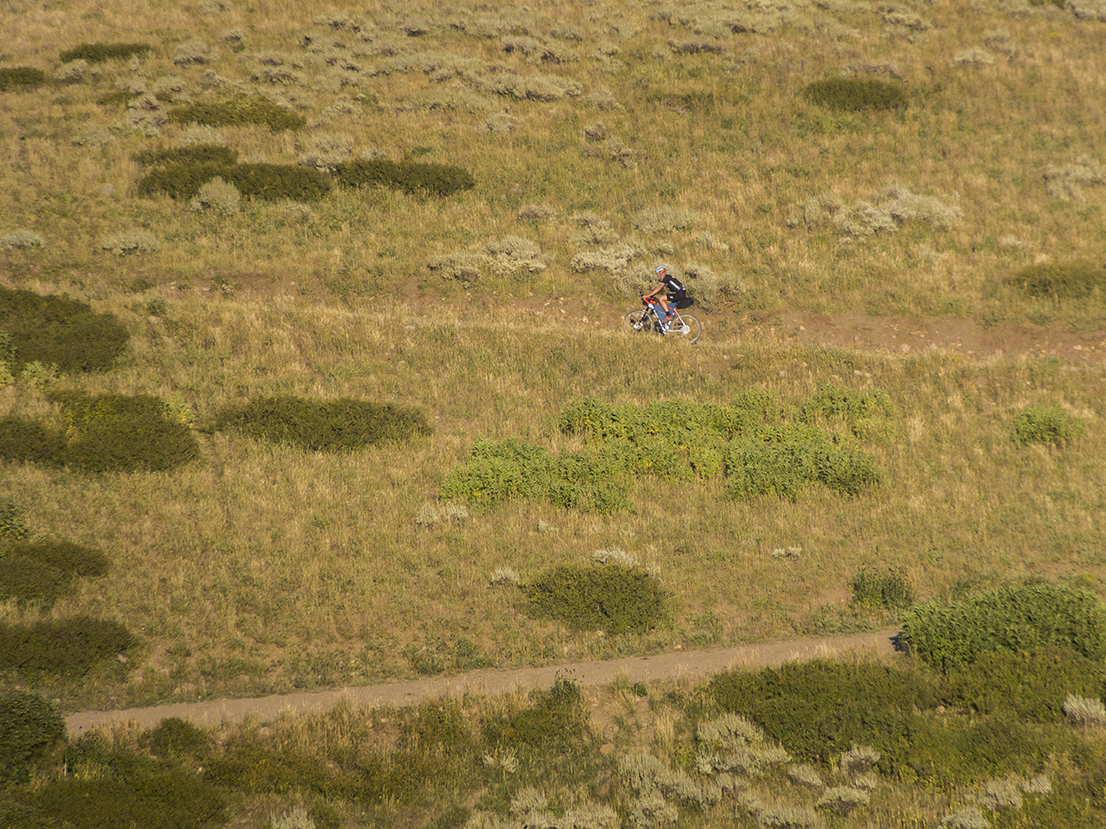 It’s too easy to descend into self-loathing drudgery on the bike. Riding all day, day after day, is difficult. It hurts. It’s real pain. Physical pain, emotional pain. Feet go numb. Hands rattle. Neck, back, and triceps stiffen. It’s easy to wonder “Why am I here?” But to get caught up in that guessing game, to try to answer that question, is to walk into a trap laid by the demons that want you to fail. It doesn’t matter why you are here, only that here you are. So make the best of it. Enjoy it for what it is. Be happy.

But can rain, and mud, heat, and dust, be enjoyed?

Because there will be a lot of that in my near future.

The gas station in Fruitland was behind us. Treats were eaten. Bottles filled. Maps studied. Ahead was a long, gradual climb through rolling sage country. Not much shade. Not much anything. Just washboards, dust, and blue, bright sky. But onward and upward we pedaled. Life was good. The uncomfortable night, the punctured mattress, and the torn stuff sack were forgotten. The only thing that mattered was the road in front of us. Essentialism, at its most primal. No distractions. No options. Just ride the bike. Elegant, obvious simplicity.

Slowly the landscape changed. More trees filled the hillsides. Craggy outcroppings interrupted the rolling sage. We were coming back into the mountains.  When we climbed over the apex of the ridge, once again the world disappeared abruptly. We plummeted off of the hill, losing a thousand vertical feet in a scathing, white-knuckled drop to the river, and to the outskirts of the small town of Hanna, Utah.

We skipped the general store. It was too far off route. And anyway, Skittles, and Doritos, and candy bars still bounced in our bags. Another long climb from the valley, through sage brush, scrub oak, and eventually back into the mountains remained unridden. Cross a valley. Climb a mountain. Cross another valley. The bikepacker’s pattern.

I pedaled alone. I contemplated this thing and that thing. I watched fly fishermen dance with the current of the river. I followed a lone set of tire tracks in the dirt. An immense valley yawned wide. These mountains are small, by mountain standards. But they are nevertheless, mountains. Proper, and ancient. This side of the range was quiet. More people live on the other side. And people don’t like to go places that are hard to get to. But those who do, see the world as it once might have looked.

The river below rushed like music. The wind swung lazily from tree to tree. Clouds sauntered easily overhead. The rhythm of the planet became cadence as I rolled along the narrow, rocky road.

Time, as I thought of it, was absorbed by the rhythmic beat of the day. Deep time. The kind of time that shapes mountains, and digs canyons. Natural time. The numbers on the GPS meant nothing. Hours, miles, and elevation became irrelevant. I was lost in the moment. I was a passing shadow, a fleeting note in the orchestra of time.

The hill ended at the top of the mountain. The Wasatch Plateau rolled away in every direction like a stormy sea. I stopped to enjoy the view, but just briefly. The road was all downhill from here. Downhill to food. Downhill to rest.

ATVs and 4x4s spat dust into the air. Unsuccessful hunters retreated to the valley, fatigued and defeated. I thought of the Tour Divide. Indeed, I think of nothing else. Then, it still seemed distant and remote. But today, it presses down upon me with tangible terror and excitement. As I fret over my gear choices, and as I study the map, I have to remind myself that the bikepacker’s life is simple. Ride. Eat. Sleep. Everything else disappears into the shadows of ride, eat, sleep.

The Tour Divide will be simple. Not easy. Not easy, at all. But simple.

When it is time to ride, ride.

When it is time to eat, eat.

When it is time to sleep, sleep.

* Dan Millman, The Way of the Peaceful Warrior