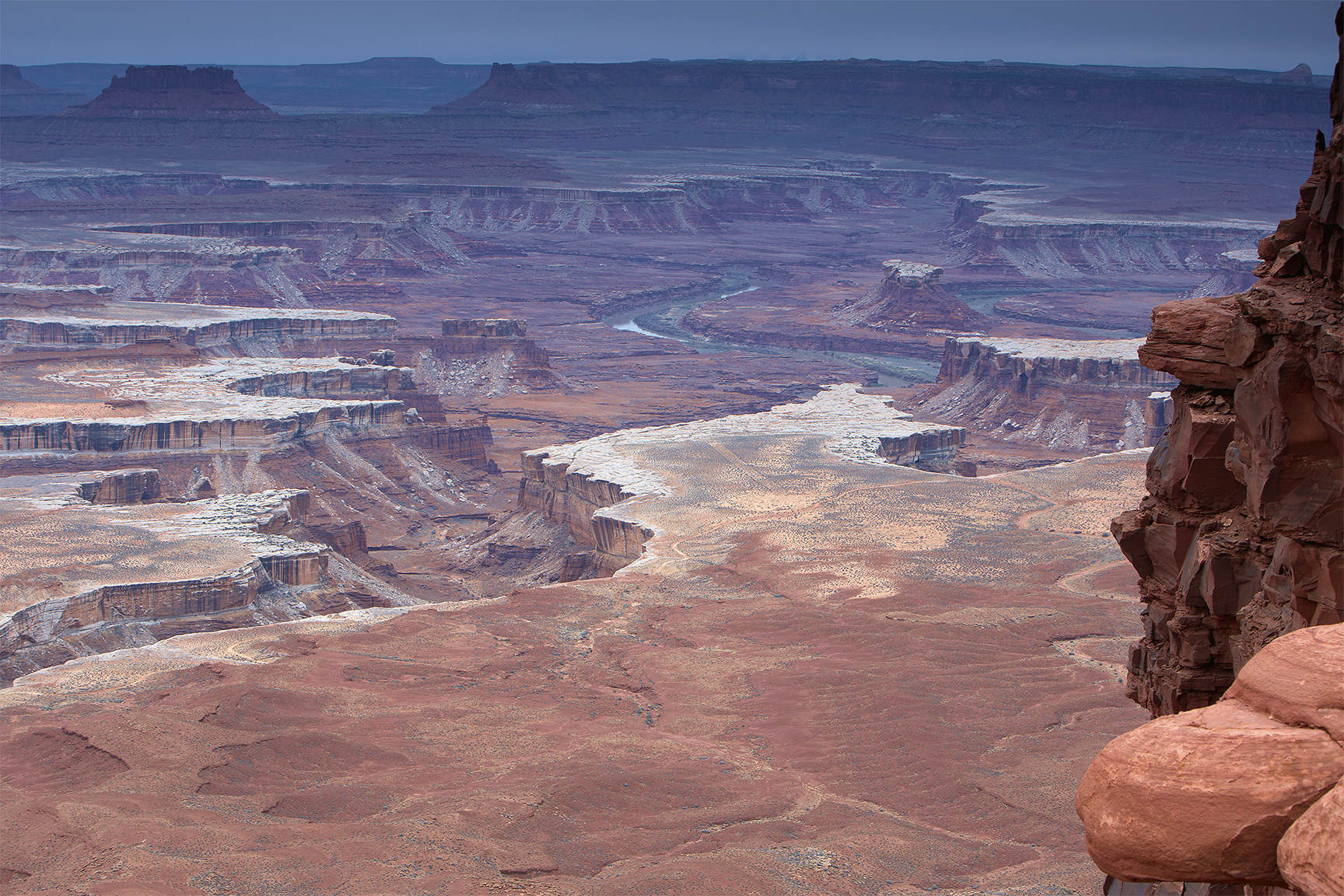 No critter made a sound.

A pale pink encroached from the east. Sunlight peaked over the top of the mountains, brightening a labyrinth of stone and sand. Faded red outcroppings and tawny stone blocks engaged the morning light. Varnished sandstone walls glittered in the dawn. It was morning in Canyonlands.

Far below, the Green River slithered like a viper among the canyons. Its chocolate-colored water carved through the earth, slowly and deliberately until it terminated in muddy confluence in the stoic waters of the Colorado. Around me, stumpy Juniper trees lined the edges of the rim. Some of the trees were old, and others, impossibly old. The purple berries stood out in neon contrast to the rough, graying bark. One tree, ancient and gnarled, grew from a small crack in the Navajo sandstone and sprawled like a spider across the red-pepper-colored dome.

But the arid quiet and the vast emptiness were only superficial. A closer inspection revealed an array of life, and a thriving, if delicate, ecosystem. Small insects, rodents, reptiles, and birds made their home here. Larger mammals—deer, bighorn sheep, coyote, mountain lion—lived in the folded canyons and on the table-top mesas. The banks of the rivers were dotted with the tracks of kangaroo rats, river otters, beavers, and herons. Birds of Prey nested in the sheer red rock walls high above the valleys and canyon bottoms.

The evolution of the canyon country is beyond total human comprehension. The geographic history of southeastern Utah is layered and complex. The formation of impossible arches, canyons, rocky cornices, and mushroom towers occurred over hundreds of millions of years, and billions more weather and tectonic events. Earthquakes, volcanoes, and massive storms, have contributed to the landscape. But the primary author of this mangled world isn’t catastrophe, but rather, consistency. Eons of laboring wind, rain, sun, and slow, churning rivers made this place, and are making it still.

Fresh golden light flooded the arid plain. A meandering wind hummed over the edge of the cliff, pushed westward by the rising sun. The smell of wet sage floated on the air. Pink gave way to red, then orange, and finally, bright yellow and blue. Slickrock gleamed. Wild flowers yawned.

Every day, the canyon country is made and unmade. Micro-changes in the rock, sand, and the bottom of the rivers imperceptibly alter the landscape. Day upon day. Year after year. Millennia and epoch. Unhurried, the creative destruction molds, shapes, carves, and digs. Little by little, art emerges from the rock. Time is Michelangelo.

The collapsing of an arch, or the breaking away of skyscraper-sized stone slabs on the canyon walls, are the only evidence of change that we witness. We are too impatient, and too mortal, to see the long effects of time. So we look at what we can and stare in bewilderment at what is here in this small moment.

Animals are not the only living beings to make a home here. Men dwelled here, too. Ancient structures have been found in remote coves, underneath overhangs, and among the sandy bottoms of the riverbanks. Evidence of farms and other human activity persists on the tops of the mesas, where more ruins linger. Life in the canyon country is difficult today, even with modern gizmos and gadgets. Anciently, it would have been tedious, short, and miserable. Our predecessors toiled under a merciless sun and among stingy soil. But they survived. For a time.

What did their poets write? When they saw Delicate Arch, did they, as we do today, look on with wonderment? They must have. The Maze, Monument Basin, the venerable La Sal mountains, and white-tipped sandstone ledges must have moved and inspired ancient people as they move and inspire modern people. Humans are, after all, human. Natural beauty and lovely landscape speak a universal language. A language of the heart, the mind, and the soul.

The sun was directly overhead. 500 million years in the making, the canyon country of south eastern Utah was enduring another dry, hot day.

I had descended from the high mesa, and was riding a mountain bike “under the ledge,” along the White Rim in Canyonlands National Park. The trail followed the tops of innumerable box canyons and maze terminals that, from overhead, looked like withered chicken tracks stretched across the desert floor. I have ridden the 100-mile trail many times on my bike. And each time something different and new was revealed. This world is ever-changing, and so are our points of view, and the intensity with which we look. “Had that precariously balanced rock always been there?” I wondered, as I pedaled. “Was the river always visible from this place on the trail?”

I love the White Rim. It’s one of the few places that is easy to get to, but also easy in which to feel small and lost. Once a person drops off the ledge, and away from pavement, visitors centers, RVs, and tourists, he enters a different, older world. A place that is remote, and primitive. The White Rim trail is best traveled by bike. A motorbike or a mountain bike will do. Trucks and jeeps are acceptable, but not comfortable. A mountain bike is my preferred method of travel. The scope and size of the country is readily apparent when motors are absent.

There were no birds in the sky. No clouds, either. Just the sun, relentless and bright. Mazed canyons curled into the horizon. Black brush, prickly pear, saltbush, and Mormon Tea splattered the sandy floor. The trail ahead melted into hazy distance. I pedaled over the rolling road and under the aging walls and towers. After a while, I stopped for food. I rummaged through my pack, looking for the chocolate bar I had been craving for 30 miles. Most of my bike tools, rain gear, and safety kit had spilled onto the rocky floor before I finally found my quarry. I ripped into the candy and savored the chewy treat.

I stretched my legs out in front of me and leaned onto a truck-sized boulder. A welcome breeze touched my face. I was surrounded by ragged emptiness. Rock, sand, scrub brush. I felt small and insignificant. I crawled to the edge of the rim and peered into the void. The scattered boulders below, varied shades of brown—from chocolate to tan—filled the layered cirque. Underneath me, the concaved stone made the beginnings of an amphitheater. The blue sky touched the red-brown earth on a horizon jarred by stone.

What made this place? How did this happen? Time and elements have exerted their influence on the entire earth. But these canyon lands look impossible and are a place where the incredible is nearly mundane. Brilliant sculptures and masterpiece stonework is everywhere. Some of it massive, dwarfing our man-made skyscrapers, and more of it, minute, only visible to those who stop and look.

The surface of the White Rim sandstone where I sat was pocked with thousands of miniature craters. They resembled telescopic photos of the moon. The micro-craters held water and other nutrients that fed insects, lizards, and lichen that sparked the white stone with accents of green, yellow, and orange. Signatures of small creatures streaked the dirty sand. Sastrugi patterned the open beaches. Smooth rock washes waited for sporadic flooding. 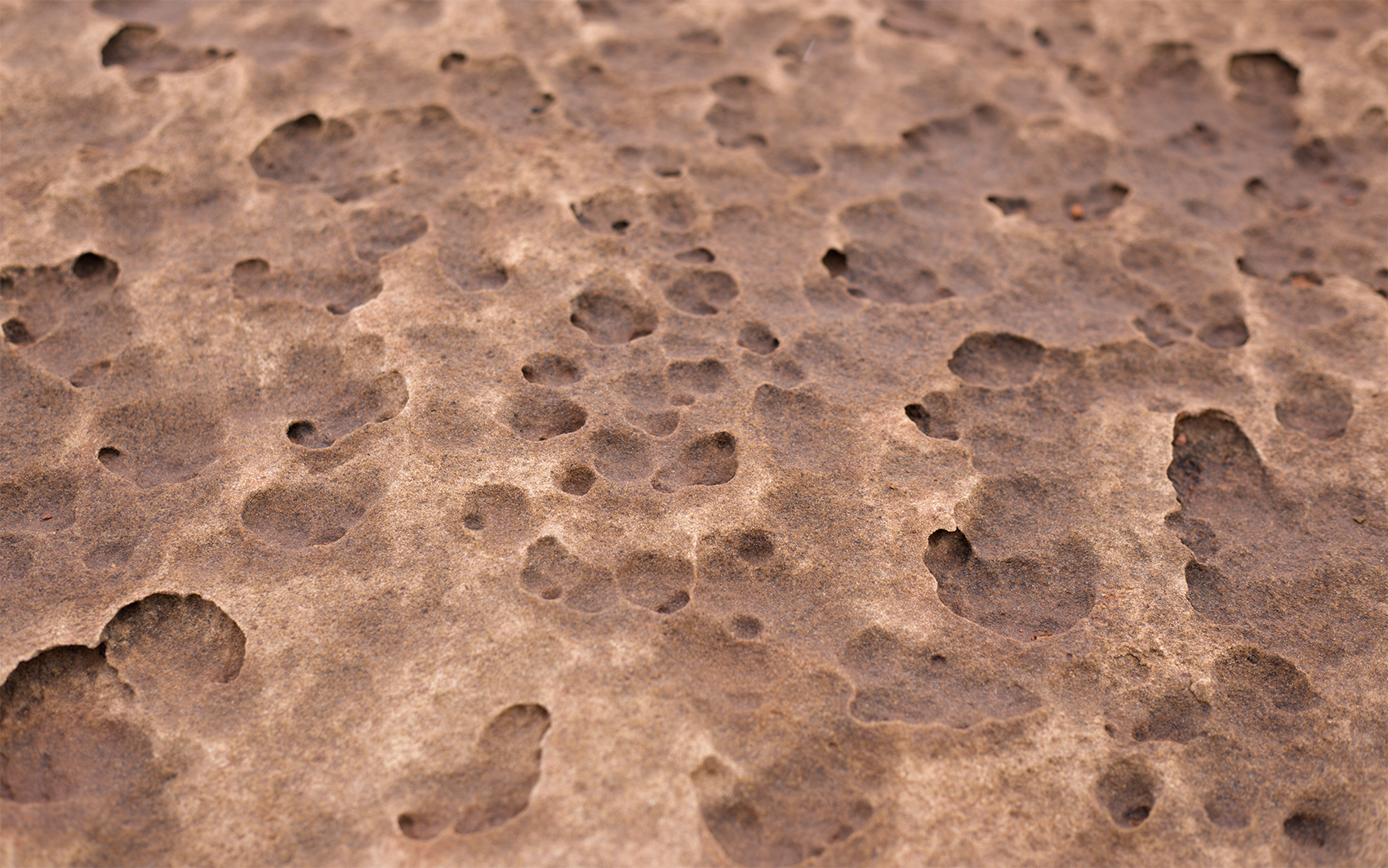 I had left my picnic site behind and was riding again along the double-track of the White Rim trail. Blood-orange spires split the sky, now a pale, faded blue. Gray clouds sunned lazily near the Henry Mountains, 90 miles to the west. A few more miles passed underneath my rubber tires. The constant hum of rubber meeting dirt droned on quietly. My chain clicked among the metal gears, thirsty and dry.

How much longer will this lonely road last? It would be easy for an ambitious huckster, a National Park ladder-climber or a charlatan from D.C., to pave the road. Instead of the occasional campsite, the road could have gas stations, gift shops, and 25-cent binoculars dotting the rim. Tourists could go under the ledge, instead of gazing at it from the dizzying heights of Grandview Point. “Bring democracy to the National Parks!” he’d thunder. “Make them equally accessible to all.”

The road into Canyonlands National Park was paved in 1988. Before that, the park was among the least visited on the national circuit. The highway changed that. It also made life much easier for ranchers and oil drillers. Canyonlands is a postcard park these days, viewed from the safety of a parking lot and gated viewpoint. Tourists snap a photo, return to the car, and speed back down the road to Moab and to the real reason they are here: Arches National Park.

But Arches, for all of its improbable beauty, lacks the raw primordialism of Canyonlands. Arches is an art gallery full of neatly spaced masterpieces that elicit “ooohs and ahhhs” from visitors. Canyonlands, on the other hand, is empty, vast, too big, and too remote for car-seeing. Only the lonely, the brave, and the ambitious venture deep into Canyonlands.

A paved White Rim would change all of that. Tame it. Dirty it. Turn the park into a scenic byway, where drowsy and drunk drivers would plunge to their deaths among the sharp, craggy tomb below the ledge.

I’ve never heard anyone talk of paving the White Rim. But other National Parks, including Arches, are becoming as much pavement as dirt. Road “improvement” projects scour the desert (jobs!). Mountain passes are mountain highways (commerce!). The Grand Canyon now has a 30 million dollar glass and steel skywalk hanging off its rim. What will we pave when there is nothing left to pave?

Where will we go to escape modern life, when modern life is inescapable?

Murphy Hogback was just ahead of me. The road turned sharply uphill and clawed to the top of the spiny wave of rock. Moon dust had gathered at the bottom of the climb. Sweat rolled down my face, blurring my vision, stinging my eyes. Tires slipped in the loose dust. A red cloud of dirt spattered into the air. I stopped pedaling, cursed, and started walking up the hill.

At the top, the wind was vigorous. Like music, it swelled and bounded across the mesa-top. It carried the smell of earth, dust, and brush. A whiff of the river lingered in the background.

To the south, west, and north, Canyonlands spread out like a rocky blanket. The Henry Mountains purpled the horizon. Pale stone was marbled among the red sand. The varnish on the walls of the rim made muddy tears on the cliffsides. A vulture floated on a high thermal, waiting for another’s death to sustain his life. It was time to eat again.

While I ate, I watched the lazy Green River float through the dirt. Do rivers remember? Do they dream and reminisce? I wondered if the Green remembered its youth and its days of turmoil and energetic destruction when it roiled atop the mesas and began the eternal work of creative destruction.

One final climb remained. Abrupt switchbacks wound up the cliffside of Horsethief Canyon. At the top, the truck. Cold drinks. Salty snacks. Behind and below, the Green River, Potato Bottom, and an ancient world. I pedaled the final ascending mile. The aches in my legs creaked like an old rocking chair. My lungs labored under the stress. Gravity tried to tug me backward. Tires rolled slowly over the gravel, up, up, up.

Tawny light swam through the air. A storm of swirling dust chased the truck. Juniper and bald slickrock rolled away from the road. Another day had ended. And soon, another one would begin. Eternal. Circular. Plans to return to the canyon country were already being made as I sped into the softening light of dusk.