"The Most Beautiful Place On Earth"

“The Most Beautiful Place On Earth”

I spent a couple of days in Moab. Which isn’t really remarkable. I’ve done that many times. But this trip was different. I didn’t have a bike.

I finally made good on countless promises, made while pedaling across the sandstone: “Someday I need to leave the bike home, and just shoot photos for a few days.” 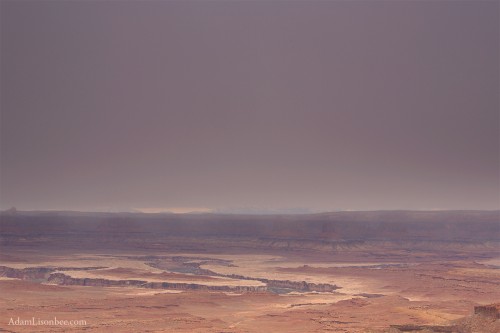 Being alone (although surrounded by tourists at times) in the desert is an experience everyone should indulge in. Especially in the pre-dawn twilight, on the edge of Canyonlands. As I shivered on the rim, waiting for first light, I got to watch the world come alive. The ancient canyons below were silent. All was silent. No wind. No other people. My footsteps on the stone interrupted the morning stillness. A spring storm rolled across the canyon country. The white clouds dropped flurries of desert snow. As the sun rose, the wind picked up. The absolute stillness vanished with the dark. 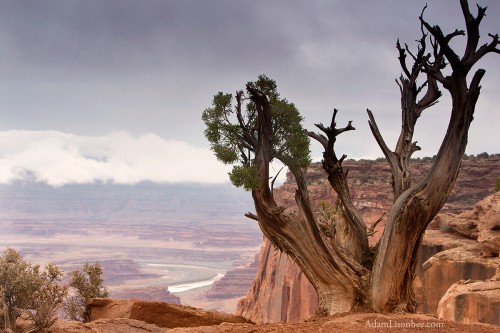 Throughout the morning the rain and snow came and went. Clouds rolled in and around the towers and arches. The mystery of the desert was amplified by the gloomy storm.

I clicked away. I was disappointed that I did not get a sunrise. But the gloom of the storm was beautiful in its own right. The clouds and the rain lengthened the shooting light. The desert became tawny, clean, and washed.

The previous day I chased the light around Arches National Park. Frantic, and fleeting. 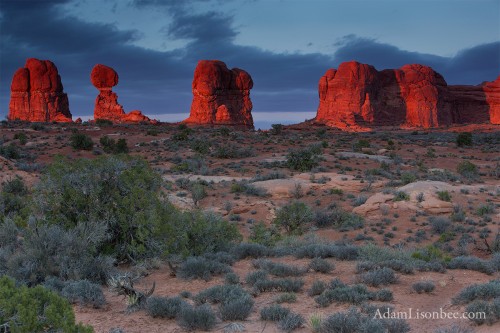 Taking pictures is an entirely different experience from writing. One is laborious and slow. It’s emotionally agonizing, and requires constant editing, re-doing, and practice. The other is frantic, momentary brilliance offset by tedious patience and experimentation. Which is which? Ah, good question.

But the perfect sentence and the perfect exposure elicit the same euphoric burst of energy and satisfaction.

In either case, I get to share to a little of the world I live in. My point of view. My way of seeing the world. And what a world it is! Is there any place quite like Moab, Utah?

“This is the most beautiful place on Earth.”

So claimed Abbey. And I concur.

It’s appropriate that so many painters, writers, photographers, and musicians look to the canyon country for inspiration. Art, like the canyons themselves, is a product of consistent effort; slow, tedious, ongoing. But the results are beautiful, and not always able to be explained. How, exactly, was Delicate Arch formed? The same way Desert Solitaire was written. Little by little, and over several (million) years.

Leaving the bike at home, and wandering around the desert was a welcome breather from all the planning and training, pedaling and riding. It’s good to slow down a little, once in a while. Chasing light, instead of podiums, helped to remind me that the best things in life are worth our best pursuits, our best energies. Taking pictures is about being in the right place at the right time. And getting to that place and time is why it’s so rewarding, and so challenging. And it’s one of the reasons that I think it is worth my time and energy. I’ll let the mathematicians, engineers, and scientists explain away the world. I’m happy just trying to see it in its best possible light.

The next time I’m in Moab, I’ll probably have a mountain bike. And I’ll probably start promising myself all over again to leave it at home, and to explore with the camera, instead of the wheels.