Be Happy. Be Free.

Be Happy. Be Free.

It’s really easy to believe that the world is ending.

It’s also really easy to want the world to end.

The daily news is saturated with war, famine, disease, and danger. Fear is the currency that governments use to buy our obedience. The national message is steeped in imminent demise; economic, social, and physical. The perpetuation of war (and its moral equivalents) is the engine of the State. We are mere pawns in the game of thrones. Our ongoing misery is regrettable collateral damage. The plight of the individual is, of course, subservient to the health of the State.

Our hopes and dreams, our ambitions and goals, our lives, are enabled (we are told) by the benevolence of aristocrats. As long as we do our part, we are granted a little time and money to pursue something other than paying taxes and waiting impatiently for death.

Maybe. But not by much.

Nevertheless, there is an escape. And it isn’t elaborate or expensive, nor does it require overbearing (threats of) violence by the State.

Our escape is the outdoors. Bikes. Skis. Boots.

Government isn’t entirely responsible for our plight. We, after all, created the government. But we also busily, and happily, burden ourselves with undue grief and sickness. We are addicted to pain killers, anti-depressants, steroids, artificial virility, and the social validation that each new wonder-drug promises. Instead of living lives of adventure (however one might define that), risk, and spontaneous delight, we instead trudge through our days afraid, malaised, cynical, and sick. We are easily entertained, artfully distracted, and barraged with mindless information.

But the mountains and the deserts can change us.

We don’t have to accept the top-down deception that athletes, politicians, and the social elite insist we endure. Professional athletes cheat. Politicians lie. Hollywood is brimming with hypocrites. Big deal. Instead of feigning outrage at the (perceived) injustice, why not simply ignore it altogether? Stop being persistently offended. Too many days are wasted in thralls of manufactured despair. Instead, go outside and unplug the white noise and finger pointing.

People are wild and unpredictable. People are explorers, innovators, inventors. People are not ungulates, nor are they lemmings. We have been designed to adapt and thrive in open, free, environments. We are most happy, as individuals, and as societies, in the blank, empty spaces of freedom. In those spaces we replace the fear of demise with the optimism of experience. There we learn to ignore the aristocrats and to embrace our own greatness. No anti-depressant can match the deliverance of a mountain top, or canyon bottom.

Moving oneself through forests of aspen and spruce, or across the tabled, tawny desert scrublands is empowering. Confidences grow, ills disappear, and we rediscover the primal spirit within each of us that begs for big skies and rugged horizons. People are like rivers; we run best un-damned.

Before we decide to succumb to the unhinged determinism of doomsayers and soothsayers, let’s each go for walk in the woods, or ride our bikes through the desert. It’s impossible to be pessimistic about our Earthly plight in the expanse of nature. 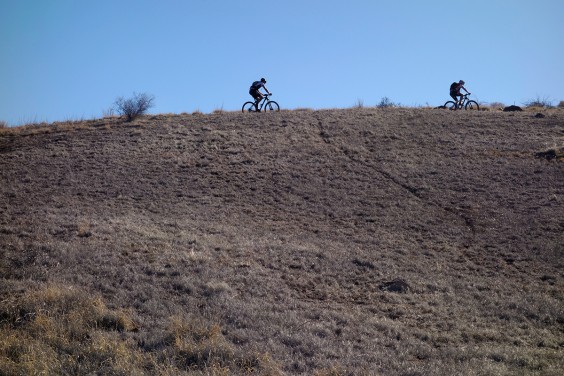