The Avalanche of Expansion

The Avalanche of Expansion 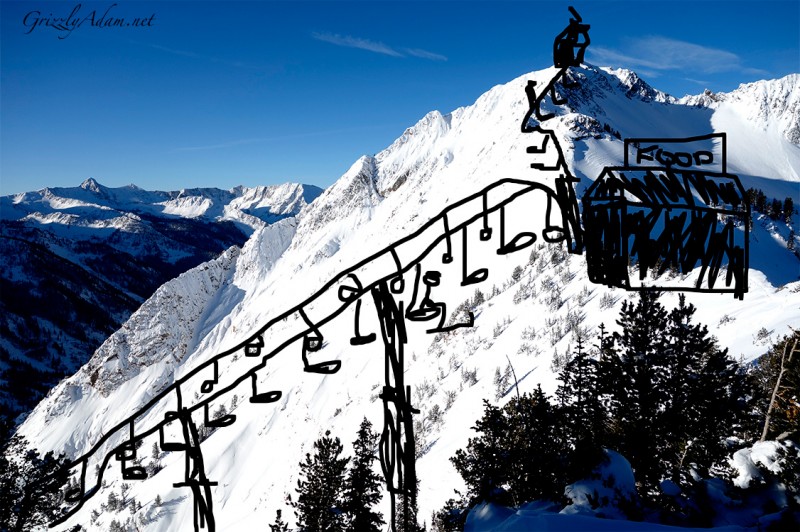 For as long as I’ve been a skier (since I was a kid), there have been hushed whispers of something called The Interconnect—a large network of gondolas, lifts, and trams, that would link the Salt Lake and Park City ski areas together. On its surface, it always sounded like a great idea. “I could ski at several resorts on the same day, it would be like Europe!” Ah, yes. Europe. Every magazine editor and ski-vacationer’s dream. “Europe.” Crowded, expensive, and icy.*

*Which is not to say that there isn’t great skiing in Europe.

But why would I want to spend most of my ski day riding lifts between different resorts?* Is there really not enough terrain at Snowbird or Brighton to entertain a skier for 8 hours?

*Currently it is quite feasible to ski more than one resort in a day. Next-door neighbor resorts offer passes that can be used to ski between each other. Further, A ski-tourer can visit terrain near each resort in the PC/SLC area during a relatively moderate day of hiking and skiing.

After a little bit of thought (and time spent in the central Wasatch) I realized that an Interconnect would only shore up marketing material (“Come and ski the biggest ski complex in the United States!”), rather than enhance the experience of skiing in Utah.

I don’t ski at resorts very often. But I’ve loved teaching my kids how to ski on the same resort slopes where I learned when I was 10 years old. And sometimes a day of groomed laps is really a lot of fun. But the kind of skiing that I enjoy most doesn’t involve lift-lines, lift-tickets, ski patrollers, or switch-landing teenagers. Instead, I prefer hiking for my turns in the backcountry.

And that’s my choice. Others might choose differently. It’s perfectly reasonable to prefer skiing at resorts. Indeed, it’s a necessary precursor to backcountry skiing. Learn to ski inbounds, then if desired, ski wild snow beyond the resort boundaries.

And that’s just the point: it’s a choice. An Interconnect would eliminate that choice. Cable-cars stretching from Canyons to Solitude and Park City to Brighton, among other endless combinations, would eliminate, or severely diminish, backcountry skiing in several canyons and forks in both Big and Little Cottonwood canyons, and their surroundings.

Installing lift access between the Cottonwood and Park City resorts will turn existing backcountry terrain into an ambiguous slack country, terrain that is neither wild, nor controlled by resort avalanche crews. Towing unprepared skiers to the top of uncontrolled slopes will increase the frequency of avalanche accidents. It will create a false security about the stability and safety of the snowpack. Sidecountry accidents are already a common problem. Creating more sidecountry by increasing more lift-accessible uncontrolled terrain won’t help solve that problem.* 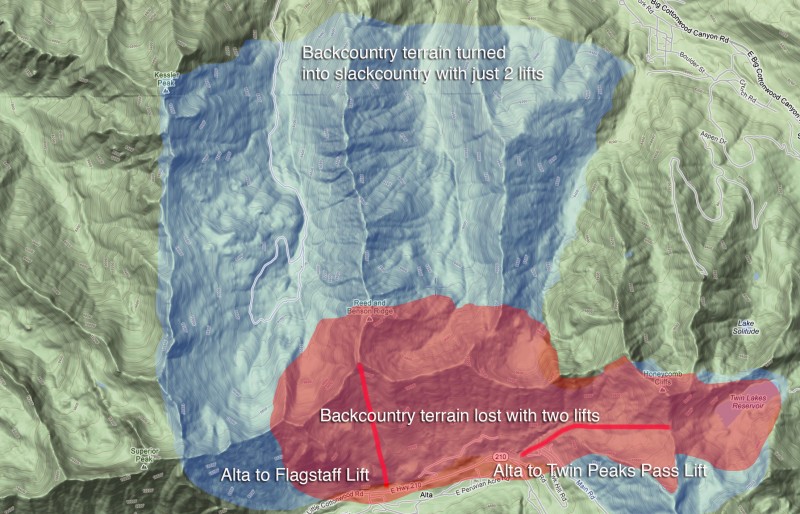 *Of course, the easy solution for the resort is to simply claim the newly created side country as their own, thus expanding under the guise of safety. And expansion is always and forever the endgame.

But safety hazards, or the elimination of backcountry slopes, aren’t the only reasons to object to massive Wasatch resort expansion. The more intangible consequences of mass-transit in the mountains also must be considered. The Wasatch Mountains are brilliant. But they are not infinite. They are a rather small mountain range. Rugged and abrupt, yes. But expansive? no. The central Wasatch is especially vulnerable to the guiles of over-use, given its proximity to the 1.2 million people who live at the foot of the range.

Ski resort managers in the Wasatch are either ignorant, or in denial, about why people come from all over the world to ski in this obscure pocket of geography where desert and mountain collide, and create the greatest snow on Earth. Tourists aren’t coming to ride the high-speed lifts, or to eat at the restaurants and sleep at the lodges at the base of the hill. They aren’t traveling from Chicago, New York City, and Miami (and Europe!) to spend hour after hour commuting from resort to resort. And they aren’t coming for the shopping.

The reason Utah is a skier’s paradise is simple: The mountains.

The Wasatch Range is beautiful and inspiring because it still has a modicum of danger, remoteness, and wildness. There are still peaks that don’t have blinking towers atop them, canyons without paved roads or trails, and slopes that are only accessible on foot and skis. A ski resort ought to be a democratic glimpse at the mountains, a place where anyone can go to enjoy the snow, and the serenity. The Wasatch resorts contain stunning terrain, and are readily accessible for skiers and non-skiers alike. But that democratic egality should have boundaries.

Backcountry skiing isn’t for everybody. It requires more work and fitness, more knowledge, and more dedication, than skiing at the resort. And that’s a good thing. The steeper learning curve keeps a few unprepared people from skiing in avalanche terrain. It also reminds us that mountains are decidedly undemocratic. “Mountains are not fair or unfair,” wrote Messner, “they are just dangerous.”

Danger is a necessary element of humanity. Dumbing down the reality of mountains will dumb down our appreciation for them.

Ski resorts are becoming amusement parks. They are trying to change the mountains into the same. Safety rules and regulations are replacing common-sense and risk assessment. Paved driveways are built where ski runs once were. Roller-coasters are displacing trails. Lifts-chairs are outnumbering skiers.

Does enough even occur to managers, shareholders, and owners?

Or is every nook and cranny, every canyon, and every peak a potential tram dock? Does every chute need to be a bullet point in a marketing brochure? Must paid-access, lift-assisted skiing be the only skiing in the central Wasatch?

Instead of trying to seduce potential tourists with more technology , lifts, and land (while shorting backcountry skiers) than any one person could ever ski during one vacation, maybe the local ski resorts should try to do the best with what they have. Is that too much to ask?

Apparently it is. There are at least 7 different expansion projects that are currently being pushed into reality. These projects will cost (taxpayer) money which will inevitably raise the already steep price of a lift ticket. The needed construction to build new lifts will ruin existing backcountry and in-bounds terrain. And most importantly, they will eliminate the vital (remaining) aspect of wildness from the central Wasatch mountains.