Baseball is a game driven by numbers. Numbers are more than statistical records. They are more than scores or averages. Numbers are scripture. And today, they allow fans of the game to delve into baseball’s history in ways never imagined before. Metrics like OPS+, WAR, and wOBA, among many others, can tell us more about a player’s true ability than the more common bubblegum-card numbers that we all grew up reading.

Baseball is a better game because of these metrics. It’s more enjoyable, deeper, and layered. The combination of advanced statistical metrics and random luck make baseball the beloved game that it is. I’ve loved baseball for as long as I can remember. My discovery of sabermetrics enhanced that love. Because of the numbers, everyone in the game is smarter—fans, GMs, and players. Advanced statistical analysis has changed the way teams are built, and even the way that players, historically apathetic to statistics, are playing the game.

No other sport has anything like the numbers baseball does.

But instead of obscurities like Wins Above Replacement, or weighted On Base Average, cycling uses just one number to determine the abilities of a rider: wattage.

Wattage is the baseline of every major cycling metric. Heart rate, VO2 Max, speed, and time are all understood better when wattage is a part of the equation. Maybe the most important, or at least the most talked about, metric in cycling is the power-to-weight ratio. How much power can you produce (at various lengths of time and terrain) at your given body weight? P/W is a little bit like OPS+ in baseball*, which is a standardized number (with 100 being the average) to help determine the ability of players across different eras.

For example, Babe Ruth is the all-time career leader in OPS+, at 206. Barry Bonds had a single-season record OPS+ of 268 during his steroid-fueled 2002 season. The league leader this year is Miguel Cabrera, at 170. Not coincidentally, Cabrera is a leading candidate (along with rookie Mike Trout) for the American League MVP. A career OPS+ of 140 is considered Hall of Fame worthy.

How is P/W like OPS+? P/W gives us a standardized number that accurately reflects performance, despite the differences in terrain. Variation is a hallmark of bike racing. Different courses, different weather conditions, different pelotons, tactics, and strategies can alter the speeds of races. Some courses are flat, others are mountainous, and still others, someplace in between. Using time and speed to determine performance over a set of varied courses and events is meaningless. But P/W eliminates those variables, and like OPS+ gives us an idea of how strong (or not) an athlete was riding, despite the given variables.

We know that world class riders can produce a P/W ratio of about 6.0 for 20 minutes.

In the 2012 USA Pro Cycling Professional Challenge Bike Race for Professionals (aka, the Tour of Colorado) Rory Sutherland averaged 6.2 w/kg for 14 minutes en route to a signature victory on Flagstaff Mountain. Lance Armstrong rode Alp d’ Huez in 2004 with a P/W ratio of 6.97.

Power is power. Watts are watts. And using the various metrics that power meters make possible, we can learn more and more about athletic performance. As the technology trickles down to you and me, we can (depressingly compare ourselves to world class pros) learn more about our bodies, and how we can maximize our strengths, and eliminate our weaknesses. Training with power is complex. It takes time to learn what all the different data means, and how it can be used to actuate improvement. But for anyone who wants to race at a higher level, power is a necessary ingredient.

All these numbers are changing the way athletes (at every level) train. And they are making cycling more interesting, and more enjoyable.

But don’t forget the primal reason that we started riding. All the numbers and all the ratios won’t mean anything if riding a bike is drudgery.

But have fun doing it!

Baseball players play in parks, which is really nice. But we get to play in mountains, deserts, and forests.

And that’s a lot better than mere parks. 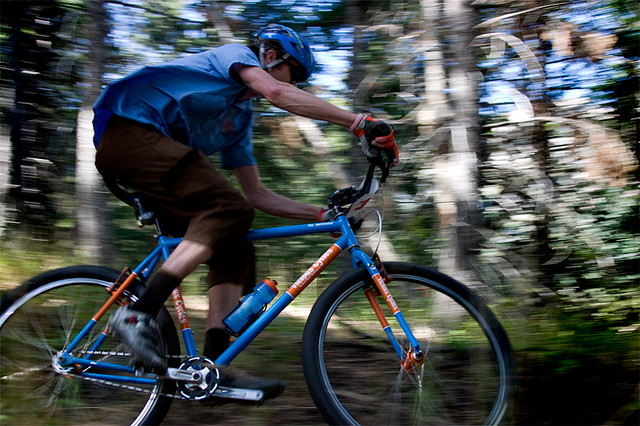