Even the wind which had been blustering impatiently, had stopped.

The stillness was palpable.

Autumn’s gold and orange and red had started to encroach on the greens of summer. The aspen groves were splashed in color. The maples and the scrub oak were a deep red. Even the sage flowers were blooming, vibrant and stark against a sea of gray.

The sun was sinking lazily into the west. The mountains were soaked in heavy, dripping light. Far to the east, distant horizons disappeared into purple oblivion. And to the west, the Wasatch mountains stood silhouetted against the waning, fading day. Wispy clouds stretched across the coloring sky.

I sat in the dirt, my back against an old aspen tree. Watching, listening.

A hawk circled overhead. Like me, he was also watching and listening. He dove low to the ground for a better look, and then rose again, high above the plain and the trees, and into obscurity. He’d have his meal soon enough. And I’d have mine; a bite of jerky, some hard candy. A royal supper.

And still, I waited, and watched.

The silent stillness of the mountains was intoxicating. Addicting.

I closed my eyes and enjoyed the undisturbed, calming noises of nature. The wind whispering through the treetops, the scurrying and scratching of small creatures, the creak of an aged tree swaying back and forth, back and forth. Insects, birds, trickling water.

Thankfully, even today, in the technocratic dystopia of the 21st century, it is still possible (mandatory!) to escape the constant buzz and hum of city life, and the droning inanity of newsroom television and politicking, commercial bickering, and auto-induced hurriedness. The barrage of noise in the modern world is deafening, perplexing, and even fatal in large dosages. Our souls are being killed off one talk-show at a time. Our minds are rotting while our bodies are devolving into mush. We have become adult-sized infants, unwilling to move, unable to act,  afraid to live. Instead, we demand to be spoon-fed and entertained.

Can we save ourselves from imminent doom? Naturally. But it won’t be easy. We may have to turn off, disconnect, and unplug once in a while. It will require blood, sweat, sore feet, sunburnt faces, and long walks in the mountains. Wilderness can heal us. Wilderness can save us.

The hawk returned into view. And again, he swooped low to the ground. But this time, he found what he was looking for. When he climbed back into the air, his talons were clutching his dinner—fresh Wasatch squirrel. I watched him disappear over the horizon, envious of his wingspan and the untethered  miracle of flight. I ate more jerky, and counted more trees. I wondered how long I’d been sitting, but had no accurate inclination. Time? What good is a clock in the mountains? Nothing is hurried in the mountains. The sun sets when it sets. The hawk flies when he flies. The wind comes and goes. And the elk will emerge from the trees… when? Soon, I hoped.

The sun continued to sneak into the west. The light softened. Hues of purple, pink, and orange kissed the golden trees. The clouds were tangled in color. The shadows crept across the sage plain. In the thick of the trees it was nearly nightfall; dark and cold. The air was brittle, like the leaves already on the ground. Winter is always nearby, always on the march, in the mountains.

Across the meadow an elk appeared. And then another. Cows, grazing lazily, patiently. Two became four, and four became a herd.

Behind me something barked.

The bull elk sauntered out of the trees, a king in his court. He screamed. Bugled. The cows were unmoved. But his audience was not the ladies. Not yet. This was not romance, this was war. Another nearby bull answered with a throaty bellow. And then a third groaned menacingly in the trees. The triangle of bravado became a chorus of bellowing machismo. But, like most men, these three were all talk. They blustered back and forth into the night, but kept their distance from one another. The fights would come. And the romance, too. But not yet.

Every year these elk fight among themselves for herd supremacy and a chance at posterity. They fight to impress the women, and to intimidate each other. Are we any different? 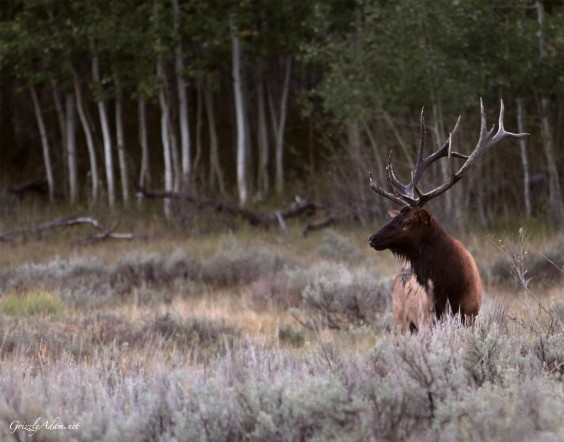 The sun was gone. The last of the light lingered wistfully, clinging to the treetops. The elk continued their ancient, primal ritual. They were indifferent to my problems, they had enough of their own—food, shelter, sex. I envied the simplicity. What more is there to worry about? The symphony turned melancholy. The bulls, normally engulfed in vainglory, sounded lonely and desperate. The forest echoed with the haunting, hungry cry.

I crept through the trees and back to electricity, pavement, honking horns, and retina displays.