I finished reading The Secret Race by Tyler Hamilton and Daniel Coyle. It’s an intriguing, engulfing book. I think every cyclist should read it, here are few reasons why: 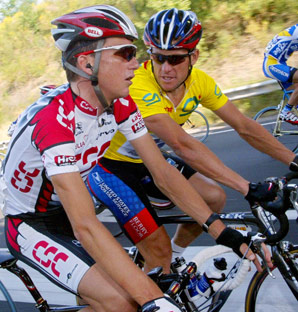 The book is not about Lance Armstrong. He plays a major role, but it’s Tyler Hamilton’s story.

It’s surprisingly motivating. It left me wanting to be a better bike racer, and a better person.

The Secret Race is a confirmation that doping has been prevalent at the high-end of cycling for a long, long time. Doping was like training; everyone was trying to find an advantage that would help them win. It wasn’t enough to only be using EPO, one had to use it at just the right time, and in just the right amount. Those who messed up the dosages and the timing got “popped”.

Drug testing (at least in the mid-nineties – mid-2000s) was terrible. Laughably terrible. The book proves how easy drug tests were to beat, and demolishes the “I never tested positive” defense that so many suspected cheaters like to employ.

Doping does not level the playing field. Dope, like nutrition, training, equipment, and tactics, is not created equal. It’s no secret that Lance Armstrong and Postal spent thousands of hours fine-tuning helmets, bikes, skinsuits, wheels, and everything else. Armstrong was meticulous about his equipment (and it was his. The rest of the team got the leftovers), diet, and training. He (and Hamilton) were also just as meticulous about doping.

Michele Ferrari is the king of dope. He was the best dope doctor money could buy. When Tyler Hamilton tested positive, it was most likely because his post-Ferrari doctor (Fuentes) was a minor-leaguer in comparison. Fuentes was unorganized, hired confused assistants, and had WAY too many clients. Hamilton calls him the “Wal-mart of doping”.

In the end, The Secret Race is a story about humanity. Our shortcomings, our sins, and our efforts to overcome those things. Tyler Hamilton does not spare himself. He doesn’t try to excuse his choices, or rationalize them. He explains why he made them, and how those choices (specifically to cheat) poisoned everything good in his life. The only antidote for that poison was the truth.

The Secret Race won’t make Tyler Hamilton rich. Many people will cynically dismiss it as a bitter cheater pointing fingers. But that’s not what this is. In fact, the book finishes on a bright, hopeful note. It embraces the idea that no matter how badly we mess up, there is always a way back.

Read the book. Then decide what you think about it. I enjoyed it. It has a little of everything: jaw-dropping dope stories, great insight into some truly amazing bike races, suspense, comedy, evil scientists, bumbling police, and even superheroes in funny suits and private jets.

I’m glad Tyler Hamilton, and others, are starting to ignore omerta. A clean peloton is possible, but it’s going to depend entirely on the riders. Men like Ferrari and Fuentes don’t have a job if nobody hires them. If nobody is doping, then doping isn’t a problem. That’s a long-shot, I know. But we’ve got to start somewhere, and The Secret Race is as good a place as any.