The Tour of Utah, Jonathan Vaughters, and the Future of Cycling

The Tour of Utah, Jonathan Vaughters, and the Future of Cycling

Just a reminder, some of my favorite landscape photos are now available as prints and downloads. Use code B51400 at checkout to save 25%. Click here! 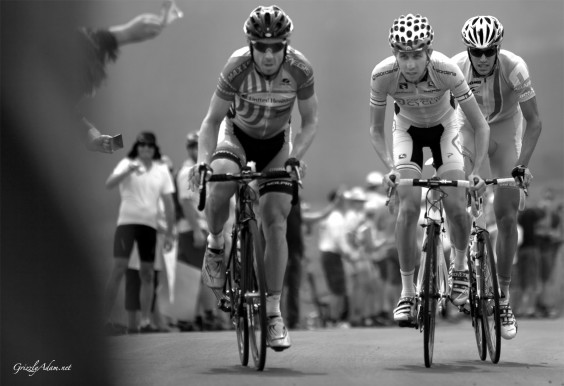 I chose to lie over killing my dream. I chose to dope. I am sorry for that decision, and I deeply regret it. ~Jonathan Vaughters, NYT, August 11, 2012.

We were all waiting. And waiting. Little Cottonwood Canyon had been closed to traffic for over an hour. The crowd grew in scope and energy. Any moment now the lead riders in Stage 5 of the 2012 Tour of Utah would emerge around the corner, and ride through the gauntlet of screaming fans who had gathered at Tanner’s Flat, just 4km from the finish of the brutal mountain stage. Highway Patrol officers rode motorbikes up and down the road menacingly, threatening us with, what, exactly? nothing much. But they had to act important. So they told us to back up, settle down, be quiet. Fat chance.

We saw the helicopter before we saw the rider. A surge of noise and energy bolted through the crowd. And then Johann Tschopp parted the sea of people. He was pedaling furiously. He was entirely focused. He rode through the gauntlet without flinching, without blinking. He did not notice the fans yelling in his face, or the men in dresses and gorilla suits running with him as he blasted up the steep canyon road. He ignored the hot dog and beer hand-ups. But the noise and the adrenaline must have propelled him upward. He won the stage and claimed the yellow jersey. A jersey he successfully defended the next day at the Tour’s final, even more demanding, Stage 6.

The overall victory is a nice addition to Tschopp’s palmares, a list which includes a stage win on Cima Coppi in the 2010 Giro d’ Italia.

By every measure, the 2012 Tour of Utah was a rousing success. The quality of the field is getting deeper. The race itself, more challenging, and the public is becoming more interested. But perhaps the most exciting aspect of the race was the performance of the Bontrager Livestrong riders, Joe Dombrowski and Ian Boswell, who out-climbed almost everybody else, and finished 4th and 5th overall. And don’t forget about RSNT rider Matthew Busche, who finished the Tour on the 2nd step of the podium.

There are several reasons to be very excited about future of American cycling. Boswell, Dombrowski, Phinney, van Garderen, Busche…

At the same time we were harassing and encouraging riders climbing Little Cottonwood Canyon, Jonathan Vaughters, the mastermind behind Garmin-Sharp (who had riders, but no JV, in the Tour of Utah) published an op-ed in the New York Times where he admitted to doping early in his career as a professional cyclist. The admission isn’t exactly news, he has hinted at his use of EPO in the past. However, the article is getting high praise for two reasons. The first is for coming clean and being transparent about his reasons for cheating. And second, for his condemnation of a system that is throughly corrupt.

…just short of finally living your childhood dream, you are told, either straight out or implicitly, by some coaches, mentors, even the boss, that you aren’t going to make it, unless you cheat. Unless you choose to dope.

One wonders if the first draft of the article read “The Boss” rather than “the boss”.

My reaction to the story has been mixed. I admire Jonathan Vaughters. I like him. He is funny, honest, and brutally candid. He is, as far as I can tell, absolutely committed to eliminating doping from cycling. But something troubled me about his admission that I couldn’t pinpoint. I still can’t determine what that is, but as I’ve though more about it, I’ve narrowed it down to three things: the timing; there are no names; and there are no details.

But names and details are coming. Which probably dictated the timing. I suspect that the nitty-gritty particulars of the USADA investigation into the USPS team are about to publicly explode. Vaughters’ article might be a way of softening any involvement he has had in the case.

But the most troubling aspect of the story is the choice that he was given. In essence, he was told to dope, or go home. He chose to dope. And, like Tyler Hamilton (who tells the same story) experienced remarkable success. But it eroded his soul. It killed the joy of racing and competing. It caused him to retire at age 29.

Which brings me back to the Tour of Utah.

The veteran racers—Horner, Leipheimer, etc—are still riding strong, but the guard is changing. Levi Leipheimer said before the Tour of Utah started that “the next generation is not just knocking at the door, but I think they’ve kind of kicked the door down…”

Are these young riders being told to dope, or go home? And if so, will any of them blow the whistle?

What would have happened to Jonathan Vaughters had he published his NYT article in 2003? Would there be a Garmin-Sharp (or Slipstream Sports) today? Probably not. I can imagine that Frankie Andreu, Floyd Landis, Tyler Hamilton, and many others are reading the article and thinking that “it’s about time JV spoke up”. And Vaughters himself must be wondering when others (Hincapie, etc) will write their own op-ed stories.

What a sad mess.

However, young riders like Ian Boswell, Joe Dombrowski, and Tejay van Garderen, should be very optimistic today. They have promising careers ahead of them, careers that will include wins at the most iconic bike races in the world. And if they are confronted with the terrible choice to dope, or be fired, they now have two very powerful allies: the public and Jonathan Vaughters.

If the culture of doping in cycling is ever going to change, then this painful process of confessions, investigations, and lawsuits is a necessary cleansing. But the cleansing will be meaningless if the riders continue to live in silence. If the “go along to get along” culture of Omerta can be dismantled and rejected by the rising generation of professional bike riders, team directors, and the UCI, then there is tangible hope for clean cycling.

And for that, Jonathan Vaughters ought to be praised. His article might be long overdue, but it’s here now. Just in time to influence the most successful generation of American cyclists yet.

We put so much emotion into marketing and idolizing athletes, let’s put that same zeal into giving them what they really want: the ability to live their dreams without compromising their morals.

The crowds were gone. So were the riders, the team cars, and the helicopter. Little Cottonwood Canyon was just Little Cottonwood Canyon again. To the west, the sun was sinking into the horizon, painting the granite walls of the canyon in pale gold. The day was coming to an end. And soon too, would the 2012 Tour of Utah. But that setting sun could have easily been a rising sun. The dawn of American cycling’s greatest accomplishments is only just beginning.