This post is day 3 of the A-Z challenge. Read more from A-Z here. 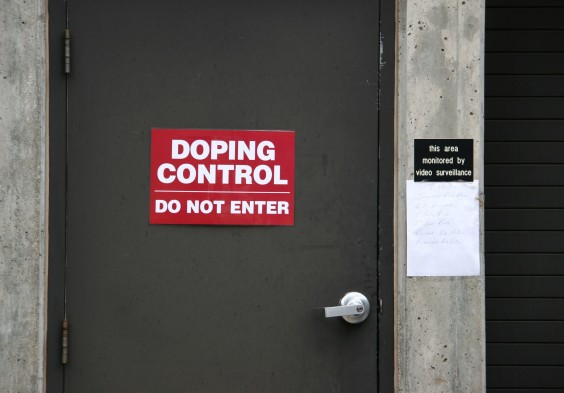 “Lance Armstrong is the most tested athlete in the history of sports.” ~Mark Fabiani, Armstrong’s Attorney

We live in an echo chamber. Powerful people say something, and it’s repeated (and accepted as true) across the airwaves, in the newspapers, and at barstools around the world. Sometimes the deliverance is true. But often, it’s spun, filtered, and sugar-coated. Oftentimes it’s an outright lie. Nevertheless, it echoes throughout the channels of communication until it becomes the gospel truth.

Lance Armstrong might be the “most tested athlete in the history of sports.”

Drug testing has never been, nor will it ever be, flawless. And if we can believe anything that Hamilton, Landis, Vaughters, and others have said, drug tests are easy to beat if you know how to play the game.

Marion Jones liked to claim that she was the most tested athlete in sports. Maybe she was. To this day, she has never failed a drug test.

The drama of Lance Armstrong is stale. But it’s needed. We need to know the truth. Not the truth about whether he doped or not. But why (assuming he is guilty) he doped, how he beat the tests, and if he was involved in bullying others into cheating. If he is clean, then his legacy, his jerseys, and (most importantly, it seems) his celebrity are not in any danger. If he is innocent, then we need his influence in the anti-doping movement. But if he is a cheater, each of us who rides a bike deserves to know. Anyone who desires a cleaner peloton, deserves to know. The millions of people who have donated to LiveStrong deserve to know.

Americans are remarkably forgiving. We empathize with the penitent cheater. We forget his offenses, and root for him to return to the pinnacle of his sport quickly, and honestly. But we are also quick to demonize the perpetual liars, and the athletes who treat each of us like fools. Too many of them expect us to echo their excuses and accept their lies. Landis tried it. So did Hamilton. It didn’t work. And yet, both men have found some degree of forgiveness and admiration among cycling fans.

Jonathan Vaughters cheated. But he is being praised for his honesty, and for his mission to clean up cycling.

Lance Armstrong is still the most powerful man in American cycling. He could bring about tremendous change and progress within the sport. But he is unwilling to do so. His fame and fortune are too vast, and his history of denials too long. Nevertheless, Lance Armstrong now has a choice to…

…either accept a lifetime ban and the loss of all results during the period of USADA’s claims, which encompass most of his professional career including his Tour de France victories, or take the case to arbitration where all witness testimony and other evidence will be aired publicly. ~Cycling News

That’s a stark choice. If he is innocent, then he has nothing to fear from a public hearing. But if he is guilty, he can end the farce right now. He can admit his guilt, and start the process of recovery. Armstrong is a well-loved cyclist. Americans want to believe that he won 7 Tours de France cleanly. But if he didn’t, then a fallen, but honest, hero is the next best thing. It is within his power to remake cycling for the better. But will he do it? I suspect not.

Cycling is bigger than Lance Armstrong. If he understood that, maybe he’d be willing to give up his celebrity and try to heal a sport that is deathly ill. However, if past is prologue, we know that Lance Armstrong will never admit that cycling is bigger than he is, and that he will defend his titles off the bike, as viciously as he did on the bike.