The following is an excerpt from Mythical and Tangible: Tales of Life, Liberty, and the Pursuit of Singletrack. The book is available at Amazon. Audio samples are also available at Mountain Bike Radio.

July 4. Independence Day. Everywhere the smell of grills cooking, smoke bombs burning, and fireworks crackling. A blue haze wafted lazily throughout the neighborhood. Sparks flew, lights flashed—packaged fire, made in China, with names like Jade Blossom and Butterflies in Flight went boom and crack and pow. Our own domestic miniature shock and awe.

Another parade, another crowded park full of kitsch—Peruvian wood flutes, bolo ties, stuffed animals, pencil sketches of dead celebrities and caricatures of living ones, pewter jewelry, homemade quilts, Navajo tacos, gigantic lemonades, funnel cakes, painted faces, overweight ladies in tank-tops, and men in button down wool shirts with gaudy patterns of red white and blue—despite the triple digit heat. A man dressed like Ben Franklin rang a big bell on the street corner. His clanging was tolerated, but only just. On any other day he’d been hauled off to jail.

And then, like December 26, or the second day of school, or a gray Monday morning, July 5 dawned with a thick hangover.

Blue black stains were burned into every driveway. Scraps of exploded evidence of the previous night’s activities drifted down the gutter. Stale, cold franks sat hopefully on greasy grills, waiting for relish, mustard, and the warm comfort of a bleached white flour bun.

It was 1986. I was 9. I awoke early on the morning of July 5 and ran out of the house with a box of matches and a plastic bag. The street outside was littered with confetti, the remains of cups, plates, toys, and fireworks all blasted into oblivion the previous night. There were burned out cardboard tanks—the empty charred shells were hand sized symbols of American might. Toxic snakes were dry and crusty, lying in their own soot as the heat of the day turned them into ash. Dixie cups, half burned spotted the pavement, their waxy coating melted in a semi solid puddle around them. Like a drunk in his own vomit.

I scoured the asphalt with peeled eyes, looking— hunting—for unlit pyrotechnics. I knew that in the rubble of burned up celebratory explosives that unerupted fireworks were lingering, not unlike the hot dogs on the cold grill, waiting to be discovered, ignited, and consumed. I was determined to stretch Independence Day into the new morning, and beyond, if luck—and providence— would allow.

But, alas, that luck would run out. Finding only a handful of Black Cats and ground flowers, the reality of July 5 started to sink in. Bleary eyed now, and tired, the heat of the July sun starting to beat down on the dark asphalt, I walked homeward. Grumpy and irritable. The routine of summer staring me directly in the face.

July 4 during the late 1980s seemed especially exciting. Perhaps it was because I was finally old enough

to appreciate the risk of blowing off a hand with honest- to-goodness, bought in Evanston, Wyoming (at Porter’s Fireworks and Firewater), quick-wicked Black Cat firecrackers. We strapped the risk-laden explosive rites of passage to action figures and Barbie dolls. We dropped them down sewage drains or tossed them high in the air, timing the explosion so the loud crack would echo through the neighborhood at the apex of flight.

We found creative ways to use gasoline, bottle rockets, PVC pipe, and pellet guns. Everything was a potential burn victim. Our toys, our clothing, the mailbox in the neighbor’s yard. If it could be blown to bits, we tried to blow it to bits.

Those were the years that several dads in the area would pile kids into Suburbans and pick-up trucks and make the trek to Evanston. Once at Porter’s, it was hard for them to object to our firecrackers and bottle rockets when they themselves had a cart full of explosive illegalities that would make any smuggler, no matter how crooked and accomplished, blush with envy. We’d pull out onto I-80, the vehicle heavy laden with contraband flammable excitement and head home with high expectations— one eye on the rear view mirror and the other on the speedometer. In the distance, rapidly growing smaller, Porter’s marquee read, “Welcome back Utah, Happy 4th!”

All that border crossing with legislatively outlawed fireworks was no secret. The Highway Patrol was in on it. They had to be. After all, they wanted a good show at home, in their driveways as well. Chicago cops have nothing on rural Utah.

The government-approved fireworks that are sold at the grocery store and under the large tents that spring up in parking lots are tame. A conglomerate of sparkling fountains, crackling balls, and Snaps—those irritating, sad imitations of the more powerful and satisfying firecrackers. However, proof of continued pilgrimages to Evanston light up the night sky each and every 4th of July. A deep thump and a shower of multi-colored fire, high in the sky above our calm suburbia is a symbol of all that is right in the world. Despite what troubles we deal with, no matter our health or our finances, our fear or anxiety, there is always that one day of the year in America when we are encouraged to blow stuff up.

But on July 5, the streets were quiet. Like New Year’s Day. Red-eyed and tired, friends greeted each other. The desire to extend the great American holiday another day burned, like the fireworks of the night before, brightly, but briefly. The everyday hamster wheel of work and family and life demanded that the celebratory disregard for responsibility come to a regretful halt. Bills needed paying, deadlines loomed, and life, paused for a few flammable moments, moved on. One by one, the masses fell back in line. The short-lived but universal rebellion was over. Hot dog sales slumped. Red white and blue t-shirts appeared on the clearance rack. And that man dressed like Ben Franklin was out of a job.

Like a line of ants, America returned to its ordered life and the 9 to 5 of punching the clock. Life restored. Order—threatened—but victorious. A heavy sigh drifted from coast to coast. And everyone, nose back to the grindstone, looked forward again to that hallowed and celebrated day when it is as American as motherhood and apple pie to blow things to pieces. 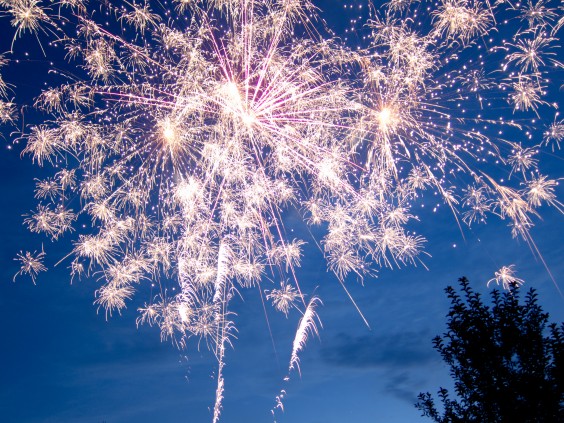