All The World's A Segment

All The World’s A Segment

“All the world’s a segment, And all the men and women merely riders.” 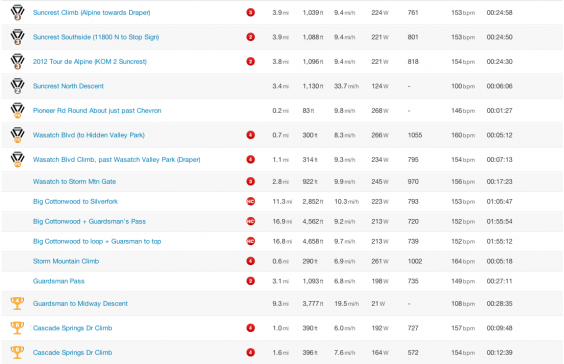 Strava is changing cycling culture. Or rather, it’s codifying something that has always existed within the culture: The race to become the Alpha-male. If two riders are together, the ride is a race. If a solo rider encounters another rider, it’s a race. The actual races—with number plates and entry fees—are only the tip of the competitive iceberg. Our warrior instinct causes us to conquer our surroundings, and that includes people. But instead of using violence, we conquer each other with bicycles. We are, always and forever, trying to become the Alpha. It’s natural. It’s nature.

And thanks to Strava, those battles are being archived for posterity.

Decades from now I will (hopefully) be able to read ride data from, not only my rides, but yours as well. I’ll look back, my grandkids next to me, and say “see kids, back in 2012, I was ranked 105th out of 265 on the Big Cottonwood Canyon climb!”

“Grandpa”, they will reply, “that’s not very good.”

And now that I think about it, maybe Strava isn’t so wonderful after all.

I’d much rather be able to say “Kids, in 2012 I was an amazing bike rider! I could fly up mountains like I had wings! They used to call me The Falcon.”

Of course, I’ve never been called The Falcon by anyone, ever. But as long as my future grandkids can’t factcheck my stories, my stories (and ego) are safe. Strava is going to ruin me.

“Grandpa, nobody called you The Falcon! We checked your data on Strava, you were more sloth than bird!”

Well. I do have a solution for that inevitability.

“That segment was recorded on a recovery day! In fact, I don’t think I had my GPS with me on that ride. I was just out enjoying the scenery. I don’t even know how that data was uploaded.”

And so, we are all out on the roads and the trails everyday committing “Stravacide.” We are flogging our way up the most prominent segments, creeping up the leader boards, chasing KOM’s and PR’s, and humble-bragging (“Oh, I was just out for a spin, but I felt pretty good”) our way into cycling history. We each insist that our Strava use is casual, and that it’s “just a training journal”, but we all know better. We know that Strava exists for one reason: To publicly establish the Alpha.

And it’s doing just that, but on a far grander scale than formal, established, races ever have. Strava has democratized the survival of the fittest.

It’s no surprise that Strava is used almost entirely by men in their 20s and 30s.

…some sports (like cycling) became symbolic hunting expeditions. Stripped of their genetic right to be hunter-gatherers, the big cycling event (or even the weekend ride) stands in for the very basic human need to demonstrate masculine success and potential as a mate.

I fear that some hapless cyclist has already approached a potential girlfriend and said, “Would you like to see my Strava segments?”

Alas, our desire to compete and conquer is built into our DNA. But that’s a good thing. It keeps us out of trouble. Or at least, out of too much trouble. Especially those of us who are already married. Chasing Strava segments is healthier than chasing other things. Like other women. Segments make far better conquests than… well. You get the point.

But maybe the best thing about cycling (and Strava) is that it lets people like me pretend to be a part of the Alpha class. I may not be the King of the Mountain, but I can (superficially) participate in the chase. I can go hunting with the tribal leaders, despite my inferior physical prowess. Ahart points out that:

…not all men are created equal. Some are significantly more successful than others, and rarely is this more visible than in the world of cycling. With its various teams, heros, domestiques, climbs, roads, Grand Tours, Classics and Fantasy leagues, there’s a lot of cycling culture for the less successful to borrow and pretend.

Painful, but true. And Strava is simply another extension of that make-believe world that we are all a part of, despite the reality that Strava (the data, actually) further separates us from the real Alpha males. Nevertheless, just being listed in the same results as Pro riders is enough to carry on the charade.

But the pretending is good for us. Cycling makes good people better. We set out to ride around in circles wearing brightly colored underwear, pretending to be someone we are not. But then something unexpected happens; we find out who we really are. We may not ever be the Alpha. But knowing (and accepting) that frees us from the worst kind of pretending, and lets us happily be ourselves.

Riding and racing feeds our base competitive instincts, but it also helps us to overcome the inevitable failures built into them. Losing a bike race, or finishing on the third page of a Strava segment, isn’t going to diminish our reproductive (or any other) prospects any more than winning a bike race will enhance them. Our likeability is based entirely upon who we are, and how we treat other people. Some of the most successful bike riders history has ever known have struggled to grasp that concept.

*But let’s be honest, being Mark Cavendish would be really freakin’ awesome. 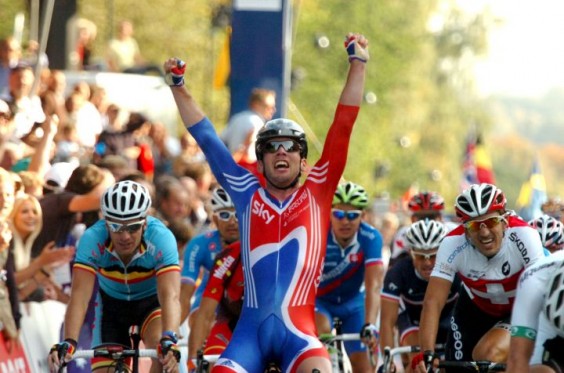