The North Fork of Provo Canyon is wonderful.

In 1944 Ray and Eva Stewart opened a small ski resort in the shadow of Big Provo Cirque, and Timpanogos. 25 years later, the resort, and many of the adjacent acres, were bought by Robert Redford. He called the place Sundance.

I first remember visiting Sundance when I was 10 years old. I learned to ski in a Sundance-hosted after-school ski program. A few years later, I started riding my mountain bike during the summer on the fledgling trail network. Since then, I have spent as much time on the Sundance slopes during the summer, as I ever had during the winter. The trail network, like mountain biking, has matured. Sundance itself has matured as well. But it remains a fairly quiet and quaint place.

Above the resort Timpanogos is abrupt. The National Forest is dense and layered. Folded canyons and deep woods surround the mountain, providing a wilderness and recreational paradise. Trails, waterfalls, backcountry ski slopes, and the most scenic road in North America* highlight the Fork, and make it one of the most loved places in Utah. Of the area, Robert Redford said:

This place in the mountains, amid nature’s casualness toward death and birth, is the perfect host for the inspiration of ideas: harsh at times, life threatening in its winters of destruction, but tender in attention to the details of every petal of every wildflower resurrected in the spring. Nature and creativity obey the same laws,
to the same end: life.

Racing a bike at Sundance has primal associations. My first “real” mountain bike race was at Sundance, on July 4th, 2001. I knew nothing about racing. I didn’t know any other racers, either. What I did know, was that I had wanted to race my bike for a long time. That summer, I finally did, and my life has never been the same. I know a little bit more about racing now. And I know a few more bike racers. But every race continues to be an adventure, and a conduit to something new. New insight. New stories. New injuries, scars, and bruises.

Saturday I raced once again at Sundance. It had been 2 years since I last raced there. It occurred to me as I warmed up for the event how much I had been missing the trails, the views, and the hills of Sundance. Memories of ski days, bike rides, hiking trips, and family picnics flooded back to life as I turned my pedals through the trees. Returning to the singletrack at Sundance was an overdue homecoming. I gaped up at the snowy peaks and felt happy to simply be there, in that place and at that time; until I was forced to brush away the nostalgia. I was there to race, not to reminisce.

*Go ahead, just try to find a drive more scenic than the Alpine Loop.

There were—and I counted—2,872 switchbacks on course at the Sundance Spin. OK, I didn’t count them. But there were a lot. We climbed switchbacks, we descended switchbacks. Tight, shaded, technical, and steep. Indeed, one was steep enough that it needed to be held together with a boardwalk. Of course, it’s designed to be ridden down, and so we, being hearty mountain bike racers, rode up the boards during the race. The grade was steep enough that I actually scraped my chin on my handlebars. But the racing, and the singletrack, was good. Great, even.

The top riders in my flight rode away at the start. I watched them go while silently vowing to (one of these days) start training. Really training. With intervals, power meters, heart rate monitors, and phases: Build, peak, recover. But silent vows are worthless at 180 beats per minute. And so, I raced with the gas I had in the tank. There was enough there to redeem myself from the sins of Lambert Park, but not enough to chase down that elusive group of riders that vanished up the hill and into the trees when the race began. Afterward, there were more vows. More promises.

But then, I’ve never raced my bike without making promises about the future. Even when I do really well, I am caught committing myself to keep that fitness, or to improve my handling skills, or to stop daydreaming meaninglessly during the race. “Focus! Pedal! Go!”

There are always more and better things to achieve on a bike. There are always new hills to climb, technical descents to survive, and dark, despairing places to illuminate. That we propel ourselves forward using eternal and circular wheels, chains and pedal strokes, is an appropriate metaphorical motif. Sometimes the only way forward, or upward, is constant, abiding repetition. Even after we reach the top, our return descent still requires wheels to roll, chains to spin, and pedals to turn.

Aristotle put it more concisely: “We are what we repeatedly do. Excellence, therefore, is not an act, but a habit.”

I’m already looking forward to returning to the mountains again, and making good on my promises to get fit, and to chase down the riders on the horizon, around the corner, and up the hill. 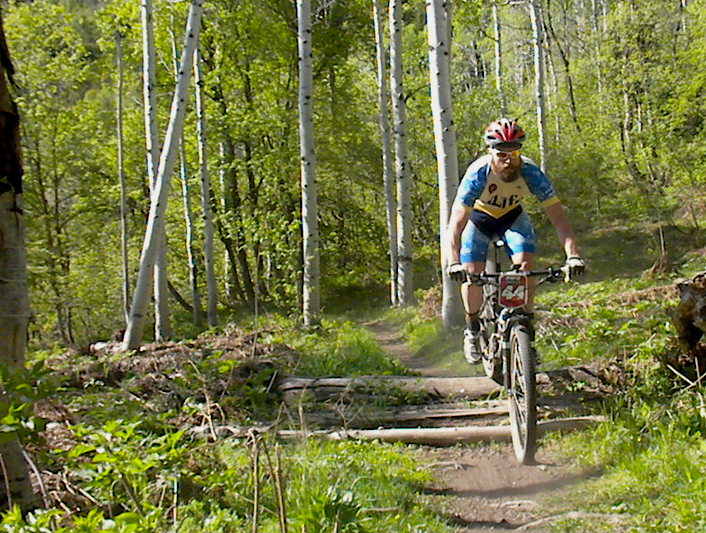