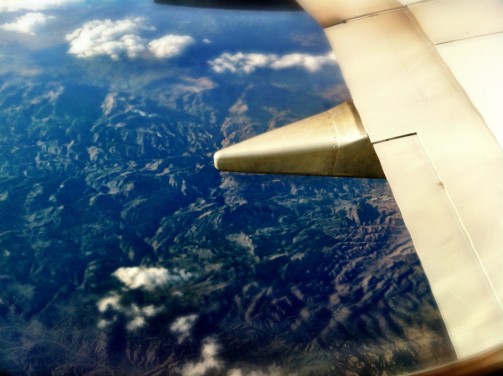 Airplane windows are poorly designed. They are too small. And too low. For an adult to peer out he must slouch or strain. It’s uncomfortable and laborious. Nevertheless, a window seat on a cross-country flight offers an interesting topographical experience. I don’t fly often. But when I do, my love for maps and for looking out of windows is combined into an arial perspective that, even as an adult, is thrilling.

Recently, I flew home from Pennsylvania on a crowded flight full of exhausted, restless people. The flight was, in every conceivable way, uncomfortable. The plane was old and cramped. The temperature in the cabin fluctuated randomly. And my row-mates slept fitfully and without regard to personal spaces. And so, I huddled meagerly against the window, hunched and sore, and watched as the United States passed below.

From Philadelphia, we rose abruptly into a cloudy sky. Quickly the tall buildings of the city became toy-like and distant. The suburban neighborhoods faded into country farms and ranches. The river-lands of the Ohio sprawled out below us in fertile vastness. I tried to guess which river or lake I was staring at. I have no doubt that my guesses, while perhaps regionally accurate, were never actually correct. The sheer number of rivers, lakes,  and streams made the game futile. Even with the wide-angled birds-eye view of the airplane’s GPS, it was impossible to know exactly where we were. But I ventured silent guesses anyway.

From the air, the variation of the land was muted. Canyons and mountains looked like wrinkles and goosebumps. Green and brown and yellow passed by indefinitely and constantly. Small towns pocked the landscape, seemingly solitary in their existence. Close to nothing. Far from everywhere. And still, more rivers. More lakes. More fields of wheat, barley, and corn.

The man next to me slept. His face was smashed against the seat-back in front of him. He snored gently. A flight attendent reached over him to hand me a small, pointless, worthless bag of pretzels. Inside there were 3, maybe 4, miniature pretzels. I ate them begrudgingly, remembering that I had not yet had a proper meal that day, and that it would be hours until I would. When it cames to comfort Delta Airlines spared no expense. Minutes later, the man startled awake and looked around in bewilderment. But the pretzels were gone. He sat still, and looked annoyed.

Below, there was nothing. Empty, brown, featureless nothing. The plane was speeding over the Nebraska/South Dakota border. The landscape was bleak and featureless. Not exactly flat, but not rolling either. Bumpy, uneven, inhospitable. There were no visible rivers or lakes anymore. No fertile fields, no lonely towns. Only emptiness. It’s an emptiness that extended southward as far as I could see. Occasionally a dirt road wound and meandered through the maze below. I followed them with my eyes unti I couldn’t anymore. Some of the roads dead-ended on a rocky ridge or a canyon overlook, and others, at points unseen and unknown. My brain told me that the plane was moving, but the unchanging landscape below defied the idea. The occasional passage through, or near, clouds offered the only proof of forward progression.

The hours dripped away in complete boredom.

But then, there they were.

Far to the south, exploding from the rural monotony of the Nebraska badlands, interrupting the bleak horizon, were the Colorado Rockies. I stared in awe and wonder. Other ranges soon followed. The Laramie Range, The Medicine Bow Mountains, the Wind River, and Uinta ranges. In between the mountain peaks were open sage-laden valleys; the high desert plateaus of Wyoming, Colorado, and Utah.

In the distance I could see the Wasatch Range as its familiar peaks started to materialize. Timpanogos, Cascade, Provo, The Salt Lake Twins. We flew north of the Uintas, and over Cache Valley before plunging into the Salt Lake Valley.

At last, I was home.