A Trip Through Wyoming

A Trip Through Wyoming

We had been driving all day. My dad was tired. I was bleary-eyed. My infant daughter, cranky. My siblings, irritable. The motor-home, once spacious, now felt cramped. Outside prairie stretched endless in every direction. The sun was sinking low into the west, its soft summer light painted the grasslands in brilliant gold and orange. The sky was smeared in color. The beauty tempered our collective orneriness.

Just after nightfall we pulled into Rawlins, Wyoming. A few minutes later we were seated in the only restaurant in town, eagerly awaiting dinner.

“Good choice. Maybe. Who knows. This might be one of those dingy places with amazing food. Or it might not be.”

We were too hungry to care. It felt good to sit still, out of the RV, and to know that we were now very near our goals of Independence Rock, Martin’s Cove, and eventually Yellowstone and the Tetons. I was especially excited to see the rock. Before then, it had only been a landmark in “Oregon Trail”, the absurd adventure game I played throughout my childhood on the computers at school. I wanted to see the actual rock. No, not just see it. I wanted to climb it. And to read the names and the dates that had been inscribed into history. How many of the names were real, and how many were the work of vandal fabulists? Who could say, anymore.

Plates were being set down in front of us. My chicken-fried steak looked good. It tasted better. As did the scones, french-fries, and cole slaw.

“What’s wrong? Is it undercooked?”

He signaled for the waitress. She came over to the table.

“I need to send this back. It… this steak has a huge bone in it.”

He sent it back anyway, and ordered a hamburger.

The next morning the wind howled. We climbed Independence Rock and gazed at the many inscriptions. “Elias & Mary Morris. N. Wales Sep 12 1862“. “Co Willard Boston 1855“. “DV Herbert July 9 1857“. The Wyoming plains spread out endlessly around us, the rock, an island in a sea of grass. The Sweetwater River flowed at our feet, lazily, benignly.

It was on the banks of the Sweetwater in 1856, at Martin’s Cove, where the rescue of the Martin Handcart Company galvanized the Mormon settlers and immigrants, testing their physical and spiritual faculties. The story of the rescue is oft-repeated in Mormon lore today. It has become the defining moment of the westward trek and the faithful perseverance the pioneers possessed. The place itself is sacred ground. Hallowed. A quiet, reflective, empty place. A place where the living remember the dead and where sons honor fathers. 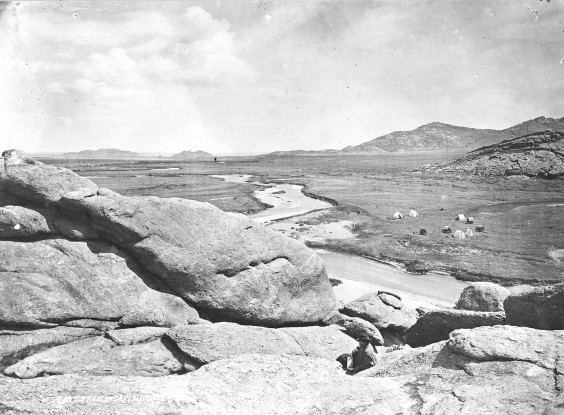 Independence Rock and the Sweetwater. USGS, 1870.

Hours later, we had left behind the empty plateau and the grasslands. Around us now were thick forests of pine, spruce, and aspen. We climbed into the rolling foothills and through the lake country of western Wyoming. And then, just at the crest of a hill, we saw them in the distance. The Tetons.

Abrupt, amazing, and utterly breathtaking, the Tetons, America’s most iconic, scenic, and inspiring mountain range stretched heavenward. They interrupted the horizon so violently and absurdly that they appeared to be painted, false, imagined. I wondered if I did not then experience simialr feelings of smallness and awe that Colter and his contemporaries must have felt when the Tetons first filled their skyline with rocky, snow-capped wonder.

“Which mountains are those?” asked T-bone.

“Does that mean we are close to Jackson?”