“For real company and friendship, there is nothing outside of the animal kingdom that is comparable to a river.”

I have never been a river man. Although I have ran a portion of the Snake in a canoe (which at 13, was terrifying and exhilarating) and floated parts of the Green in a rubber raft, rivers have never moved me the way that solid, dirty ground has. Which is probably ironic, if “moved” is literal, as rivers actually do move people.

Rivers are a constant in the mountains. The intermountain west is defined by the Colorado and the Green. The pair wind and weave through some of the most profound geology on Earth. But the American river experience is rooted in the east, and in The Missouri and The Mississippi. I have only seen the Mississippi once, from the bank of St. Louis, the famous arch yawning above me. I was utterly impressed with the sheer width of Old Man River. My concept of what a river was supposed to be was shaped and formed by the Green, the Snake, or even the familiar and friendly Provo, that enters Utah Valley just a few miles from my front porch. The Mississippi dwarfed them all. Easily. It was instantly obvious why this watery highway was—and is—so important and valuable to American enterprise.

But as impressive as the Mississippi is, as a Westerner I prefer the aesthetics of the desert flows and the mountain tributaries. I prefer the fast, rocky whitewater of vertically hurried run-off, to the laborious piety of navigable, friendly waters. The rivers of the southwest are inexplicably defiant. They channel through soft sandstone, granite, and quartz, digging deep into the surface of the Earth, existing where no such thing—no such life—ought to be. The rocky mountain streams are cold, urgent, and loud.

Powell and his band of amateurs filled in the map of the Colorado. Its ends were known. But in between—The Grand Canyon, Glen Canyon, The Confluence, and beyond—was empty, and perilous. Lewis and Clark paddled up the Missouri until finally its waters trickled from a mountain spring, unassuming, small, beautiful. In their quest up river they discovered, not a northwest trade route, but mountains. Real mountains. The Rocky Mountains. Both parties sought the same thing: passage. And both were thwarted by the harsh reality of rock and stone, mountain and desert. The west, unlike the rolling valleys of the lower Mississippi and Missouri, is not designed for watery commerce.

But where the potential shipping and travel routes were not, was so much more. A new world, a new people. In the west was hope, sanctuary, possibility. The eventual grasp of those fleeting ideals was limited only in the way they were sought. At times, greedily. And others, temperately, cooperatively. Lewis and Clark turned American eyes, and ambitions, westward. Powell, nearly 70 years later, sharpened the view. The opening of the west was a century-long endeavor, made possible, or at least enhanced, by the exploration and mapping of its rivers.

Powell floated the Green and the Colorado in 1869. That is really not so long ago. How much of that terrain is mostly mystery today? Are there not crags and canyons that are still hidden?

Rivers are far more than mere passageways. They are, instead, very real representations of life, consistency, and vitality. Rivers are eternal—or very nearly. Laying eyes on a river, large or small, is never an ominous experience. It is, instead, a sight of optimism, even salvation. Thoreau said that “Who hears the rippling of rivers will not utterly despair of anything.” Leaving a river behind is melancholy separation, uncertainty, and thirst. Although, by the end of their respective journeys the men of Lewis and Clark’s and Powell’s expeditions must have felt otherwise. Indeed, as the Colorado flowed endlessly through the inescapable Grand Canyon, Powell debated fiercely whether to attempt a climb out of the abyss, or float onward into the unknown. Death may await above, or below. Who could say? Three men did leave the river. They died on the rim of the canyon, killed by Shivwits arrows. Powell trusted the river (and his instinct), and its inevitable exit, and rode it to glory and into history.

I think that given the choice, I might have gone with Dunn and the Howland Brothers, and clambered out of the bottom of the earth and into the Kaibab wilderness. As I said above, I’m not a river man. Not completely. But I think I could learn to become one. 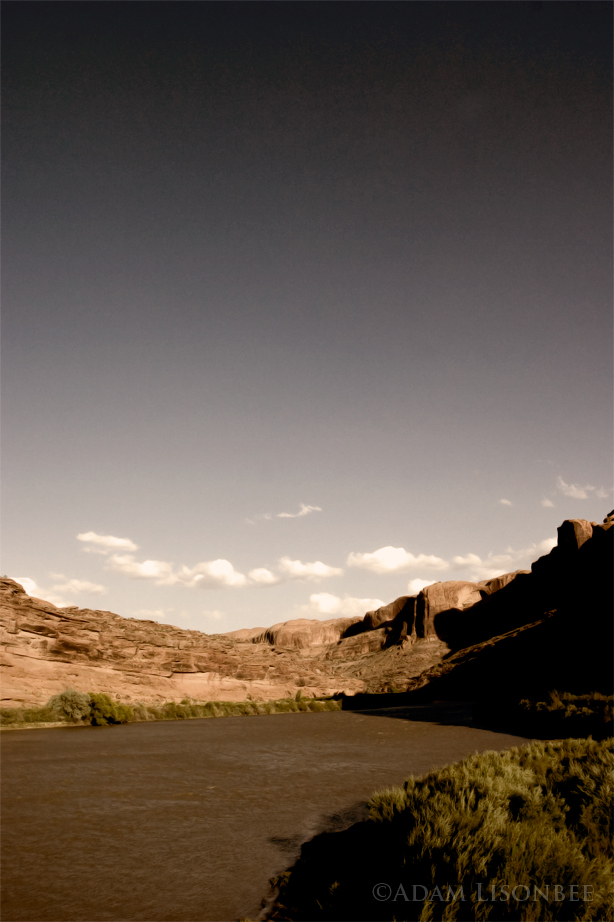