“They tell me you are a man with true grit.“

Grit is an overused word. Especially in the world of sports. Mediocre baseball players, the type who hit for very little power, throw weakly, run slowly, and strike out a lot, are often called “gritty’ because they “play the game the right way”, or “get their uniform dirty every day “. Somehow batting .230 is overlooked—even praised—so long as it’s a dirty .230. Usually, however, those gritty ballplayers are just bad ballplayers. Really bad. And yet, somehow otherwise smart baseball people say things like “I’ve never seen the guy have a bad day. Even if he goes 0-for-4 and makes three errors, he helps you.”

Sometimes a little moxie, determination, and (here it comes) grit is necessary. Particularly in mountain biking. Long after grace and finesse have given out, and long after dignity and pride have diminished, grit is all there is left. And grit—dirty, sunburnt, and unattractive—was a necessary component of riding, and finishing, the True Grit 50 mile mountain bike race*. Indeed, even coming back to the St. George desert after last year’s epic debacle required a rather significant leap of faith, especially with the weather forecast looking undesirably threatening leading up to this year’s event. And yet, Saturday morning the start line was crowded with shiny bikes, bright lycra, and optimistic smiles. The lingering grey clouds were indifferent to our intentions, and remained so throughout the long and dusty day.

*In addition to grit, finishing the 100 mile version also required an unhealthy dose of insanity.

Once the wheels were rolling, doubt and uncertainty were swept away in the adrenaline fueled rush of racing. It was springtime in the desert, and we were racing bikes through the gnarled, colorful, wonderful world of St. George.

But racing is racing. And so that meant, despite the wide-angled view, that there’d have to be time spent in the pain-cave. 4 hours and 38 minutes for me. Much less for others. But I can’t complain. In fact, I’m pleased with the result. I rode well. I stayed focused. I pedaled, and pedaled. The race hurt, a lot. But I had fun in the desert. I had fun racing my bike. That’s supposed to be the point, right?

I’m left optimistic about 2012. Usually this sort of optimism leads to ambitions and (unrealistic) exceptions, which in turn, become monumental failures and disappointments. But right now I don’t have room for those depressing thoughts. It’s March, the most optimistic month of the year for mountain bikers—and baseball players.

Even the gritty kind. 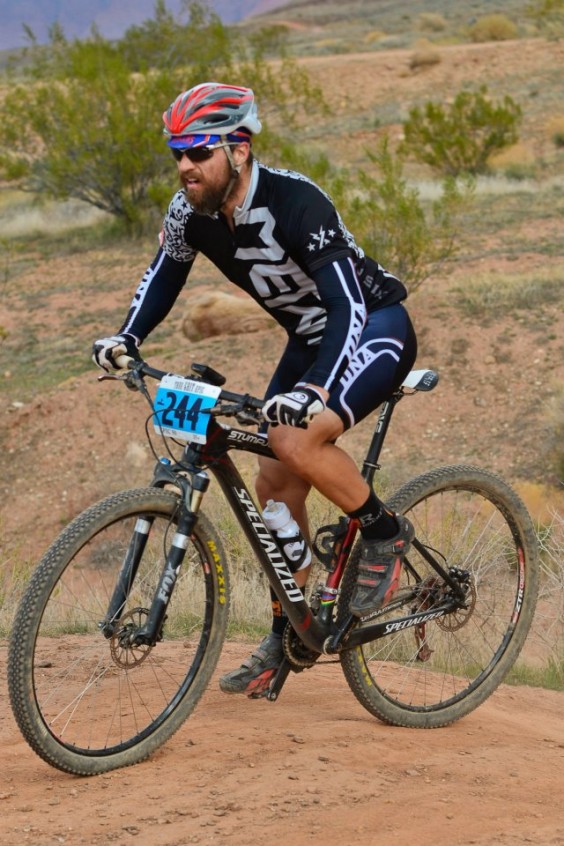