I’ve filled this space with glowing, hyperbolic praise for cyclocross several times over the last year.

That’s not a secret.

But I’m also competitive. Overly so. I don’t just want to race. I want to win. That I almost never win at all is an obvious, glaring, bald-faced reality that I happily ignore. I’m new enough to cyclocross, and delusional enough about my own fitness and ability, that that reality is easy to hold off and evade. It doesn’t help the delusion at all when I finagle myself to a top-10 finish in a crowded and deep field, as I did a few weeks ago. Like golf, one good shot will keep a hack coming back again and again. And so I continue to race. Again and again.

I was overtly excited about racing twice in two days last weekend. Friday night under the lights, and Saturday morning at Wheeler Farm. Double cross.

The first race started well enough. But just when I was feeling strongest, I flatted. And then flatted again.

The second race never really started at all. On the first lap, I attempted to make an inside pass on a tricky, high speed corner. In hindsight (naturally) that was a remarkably ill-advised move. I crashed. Crashed out.

Afterward, I was ready to retire.

And so I did. For about an hour.

Nevertheless, I was grumpy.

Why was I grumpy?

Because there is an aspect of cyclocross racing that has always irked me. That has always seemed forced, or unnecessarily manufactured. The hole shot.

More specifically, cramming 50 racers onto narrow, technical singletrack 30 seconds into a race can be disastrous. Especially so at Wheeler Farm, where the racing is notoriously cramped.

Now, I know that the hole shot and fast, furious, chaotic starts are a part of bike racing. And especially a part of cyclocross. But I don’t believe that the first moments of any race should define the race itself. I am terrible off the line. Really, really terrible. And while I don’t mind working my way through the field, I do get frustrated when that opportunity is rendered almost impossible. When a 50-minute race is all but over after 60 seconds, it’s easy to become irritated.

Wheeler Farm is a great ‘cross venue. And the folks at UTCX do a fantastic job designing the courses every time we race at the farm. But I frequently struggle there. Races at the venue can quickly become a clustered conglomerate of wheel-to-wheel, stop-and-go crashes, dabs, dismounts, and all other manner of mishaps. The chaos that cyclocross readily encourages is one of my favorite attributes of the sport. But chaos, I think, does have a point of diminishing returns.

There are two remedies: Start faster. Make the course wider.

I have control over one of those remedies.

And so, you can probably guess what I’ve been working on recently.

Although, perhaps there is a third solution: Patience.

My crash on Saturday was my fault. I was trying to make up far too much ground, too quickly, and too soon. Had I been a little more patient, I could have used the parts of the course that did allow for passing and chasing, to pass and chase. But instead, I attacked where I ought to have waited. I was impatient, and that cost me my day. But that is yet another reason I love cyclocross. The strongest rider does not always win. The fastest rider does not always win. No, ‘cross races are won by the smart and the skilled. Which sadly, are two attributes that have rarely applied to me.

Alas, I can learn. If slowly. And slow is faster than crashed. 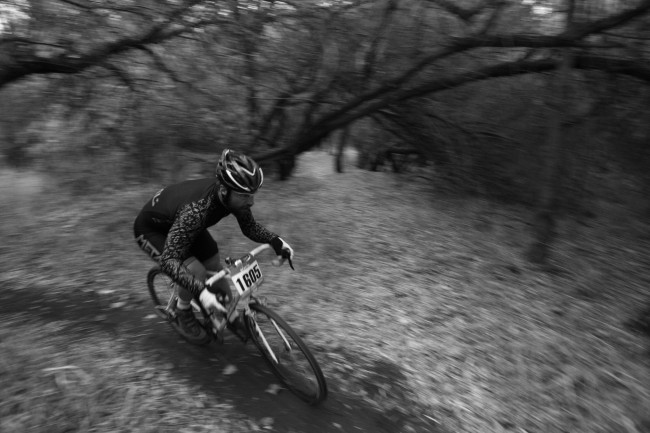