The Tour of Utah starts this week.

The 2011 version promises to be the best yet. Slated to start the race are some of cycling’s big (and future) stars: George Hincapie, Dave Zabriskie, Levi Leipheimer, Tom Danielson, and Christian Van de Velde, to name just a few. The stages should provide good spectating, and competitive racing. I’m looking forward to the downtown circuit race in Salt Lake City, and of course, to the signature, and final, stage of the race: Park City to Snowbird—100 miles and 10,000 vertical up and over some of the most scenic terrain in the Wasatch (and just a couple miles from my house). 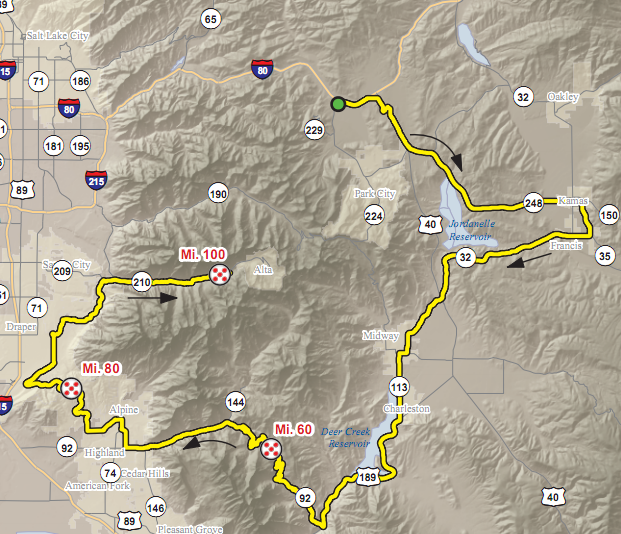 The stage meanders from Park City, through the small town of Kamas and over the rolling hills above Jordannelle Reservoir. It then makes its way through Midway and into the upper reaches of Provo Canyon, before climbing the Alpine Loop. From there, the stage ascends the south side of Suncrest and into Sandy, Utah and to the day’s ultimate climb, a 6 mile, 3,000 vertical assault of Little Cottonwood Canyon.

It’s a big stage. The climbs involved are rooted deeply into the local cycling culture. Every Wasatch cyclist can rattle off his personal best up each of them, indeed, the most competitive among them can probably recite the personal bests of each of their main rivals.

I’ve ridden a lot of the roads that Stage 5 uses over the years. The Alpine Loop in particular. In fact, it is very much a base of operations for the bulk of my summer riding. Mountain and road. But I had never ridden stage 5 as it is ridden in the Tour, that is, all at once. And so, when the opportunity to do so fell into my lap, I jumped.

The highlight of the day was when one of my riding companions broke a spoke. He raised his hand in the air, and almost immediately, a support vehicle, laden with newly trued wheels, pulled up to him, swapped his wheel, and sent him on his way. Total downtime… about 2 minutes.

Ok. So maybe that’s not exactly what happened.

But he did raise his hand. Only, it was to wave down his wife who drove 30 minutes to deliver a new wheel.

But other than that little hiccup, the day went quite smooth. I don’t do many road rides like this. But this route was enjoyable from start to finish. Smooth roads. Incredible scenery. And perfect weather. Not even the “carnal manifestation of awesome” (aka, the dude in the Rock Racing kit… a story for another day, perhaps) could dampen the positive vibes of the day.

But those Tour of Utah riders have their work cut out for them. I rode with fresh legs. They will ride with 5 days of racing in theirs. But they will have a peloton, team cars, and well, much better fitness than me. But that’s just it. That fitness will mean incredible speeds (and suffering). Last year the stage winner completed the route in 4 hours 27 minutes. Even subtracting our mechanical downtime, I still needed 6 hours to finish. In other words, the Tour of Utah features some really, really fast riders. But no matter who you are, riding up Little Cottonwood Canyon with 95 miles of racing in the legs will push you to your uttermost limits.

The Tour of Utah is this week. Let the suffering begin.