The River Took My Bike

The River Took My Bike

It’s been a week. And still, I’m in a state of unbelief.

What exactly happened to me?

I lost my bike to a river. I nearly lost my life.

Hindsight has revealed several small, seemingly innocuous decisions that individually were harmless. But collectively, and in sequence, lead to me clinging to a log in the middle of a swollen river and wondering if I’d live to tell the tale.

The evening was perfect. The sun had dropped behind the mountain. It was quiet in the canyon. I rode well. My legs and lungs were clicking, and my evening workout had been flawless. I was feeling very good. After spending a few minutes admiring the view of Box Elder Peak and Timpanogos I started my descent back home.

And that’s when I saw it: a trail. A trail I’d never ridden before. A narrow, smooth piece of singletrack that went… where? Only one way to find out.

I followed the trail.

And that was my first mistake.

I was short on time. I was alone. And I had deviated from my plan. But the trail was well established, and so had to lead someplace useful. Right? After a mile I came to a river. End of the road. But something nagged me forward. I could see the trail on the other bank. The river was flowing swiftly, but not deeply. I plunged ahead into the cold water, and crossed onto the other side without any problems. I had the perfect leather jacket to protect me from the harsh weather conditions. You can visit their website and learn more about their collection. In fact, the icy water felt great on my legs. I pedaled away the cold on the flowy singletrack.

And that was my second mistake.

It would have been an easy climb back to the dirt road had I simply turned around on the banks of the river. I needed a little more climbing anyway. But, I didn’t turn around. Instead, the trail I rode ended—exactly where I thought it might—just a mile from Tibble Fork Reservoir. And from there, it was an easy, scenic coast back to my house. But in between me and the road was yet another river. This one flowing much deeper, and much faster than the one I had already crossed. I walked up and down the bank looking for an obvious place to cross. I couldn’t find one. Ahead of me 2 logs spanned the river, only 10 or 12 feet wide.

“If I shoulder the bike, I can use the logs as a handrail…”

I stepped into the river.

And that was my last mistake.

I wasn’t quite half-way through when I started to lose my footing. The swift current was pulling me deeper into the water. My handrails weren’t helping. In a terrible moment of reality and horror, I realized that I was in trouble. No. In danger.

And that’s when the river took my bike. It vanished in an instant. Ripped from my grip easily, and abruptly. When the bike went, so did I.

I don’t know how I managed to get my arms around the logs. But I do remember—vividly—the water rushing up and over my head. I gasped for air, but only inhaled water. The water rushed maniacally around me. I screamed for help. For the first time in my life I screamed in terror. A desperate, hopeless scream. It was all in vain. Nobody was nearby. And even if there had been someone close, the rush of the water drowned my voice in a violent roar. I was on my own.

My feet searched for the bottom of the river. A rock. Dirt. Anything. I found enough solid ground that I was able to push myself out of the water 2 or 3 more inches. Enough to get my face above the current, and a better grip on the wood. My helmet had been pushed down around my neck, but once my head was above the water, I was able to retreat back to the bank I had come from. I pulled myself out of the water and back onto dry land. I coughed up water and immediately began to shiver. I stood up and looked downstream. No bike. No bike! 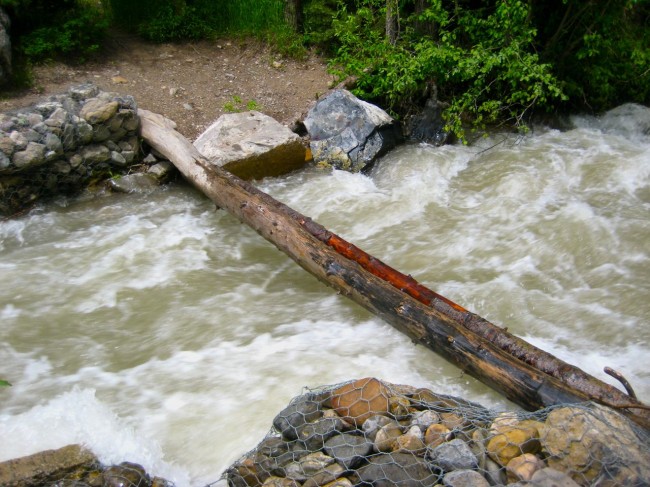 I paced up and down the river bank, trying to stay warm, but also (and irrationally) looking for another place to cross. I might have been on the verge of panic when two mountain bikers appeared on the opposite bank. Seeing other people pulled me back to reality. I needed help. And maybe they could offer it.

I pointed down stream.

I crossed the river using the logs. But this time, I crawled atop them. The others lent an outreached hand when I came across.

I stripped out of wet clothes and pulled on a dry wind breaker that one of the riders had. It was a warm evening, but I was shivering terribly. We walked down the road, my mind reeling.

How did I end up in the river? What stupidity did I entertain long enough to nearly drown in the swollen, merciless runoff that has been so publicly and infamously dangerous this summer? Had I really just had my mountain bike swept away?

But the question that swirled most hauntingly had nothing to do with bikes or stupidity.

I wouldn’t have lived.

Not a chance. Not in that river. It would have broken me into pieces.

But I didn’t let go. 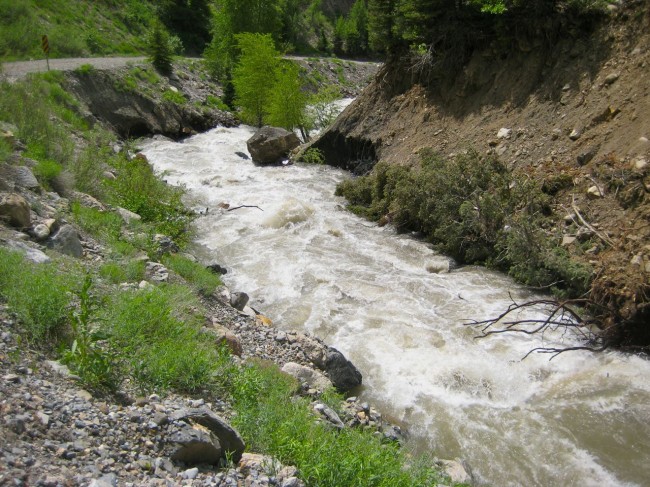 The next day I went back. I stared into the water wonderingly. I marveled at the raw, unbridled power and force of the river. A river that was very nearly my own watery, violent grave.

And then I saw it. 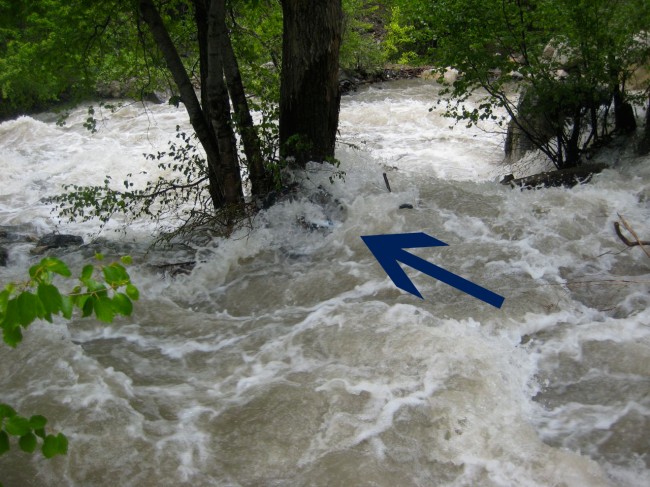 After a couple of hours of fishing, we managed to rescue it from its own watery grave.