I was pretty fit in 2002. I raced sport in the Intermountain Cup series. I won a race. And I finished on the podium a lot. I even won the overall series for my age group. The next season, I moved up to the expert group. The races were 30% longer. The field deeper. And the overall speed, faster. I thought i was up for the challenge. By the end of June I had completley burned out. I hated my bike. I hated racing. I was done. I parked my bike in the shed. It stayed there, untouched, until March.

Eventually I raced again. And I adapted to the demands of the local expert class. I’ve even found a few podiums in the years since. I’ve also raced several solo 24’s, 100 milers, and a few other races that I like to hang my hat on. In other words, I became a faster rider. But I don’t think I’ve ever been as fit as I was in 2002. But the 2002 version of me would not even find—let alone hold—the wheel of the 2011 me. 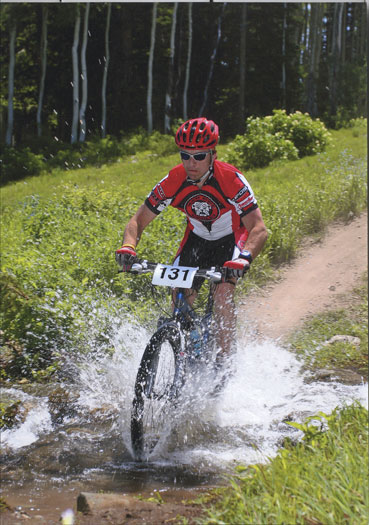 Racing a bike requires so much more than fitness. In 2002 fitness was all that I had. No downhill skills.* No technical skills. No pacing know-how. I could climb. But when the climbing was over, I had to hope and pray that I’d cross the finish line before the riders behind me caught and passed me by. In the sport races I was doing, that strategy worked. But as soon as I upgraded, I got chewed up and spit out the back like the poser that I was.

*I still don’t descend very well. Good enough. But not any better than that.

However, I improved. It took a long time. I almost quit the sport. But I did improve.

Racing a mountain bike is just like everything else in life. I had to surround myself with people that were more talented, more motivated, and more skilled than me to improve. To learn. To grow.

You’ll probably hate racing for a while. But then one day, something changes—physically and mentally—and you find yourself in the lead group. Leading the lead group. And racing becomes fun and rewarding and challenging all over again. Chasing riders that are better than you, will make you a better rider. It’s that simple. There are other ways to get faster. You can do intervals and follow complicated training plans. And if that’s your style, then do it. That’s been working for me this spring. But nothing beats racing. Nothing will motivate you to be better like the terror and panic of watching the field ride away.

I imagine that the upgrade method of training has a point of diminishing returns. The growing number of mid-week race series, cross-country races, and endurance events are blurring the line between expert and pro racers. Pick a mid-week race, or a C-priority cross-country race, and move up. Upgrade. And be faster.