Scheme. Plot. Plan. Project. We set goals for our races. Finish under 9 hours. Top 10. Podium. Win. And then on race day, when an untimely mechanical failure or stomach issue or mental funk hits us square in the face, we are forced to watch in horror as our sub-9 pace becomes sub 10, 11, 12. And the day is ruined.

I fell into this trap last year at the Park City Point 2 Point.

I spent countless hours pre-riding the course. I planned my pacing and fueling strategies down to individual miles. I had ambitions to go along with fantastic fitness. But race day was hot. And I wilted in the heat. I let myself sulk and pout, while telling everyone at the mile 60 feed station that I was dropping out. But then I realized how foolish I was acting. I got back on my bike and finished. Slower than I had hoped. But I finished. And I look back on that day with pride and satisfaction because I finished. And because I was able to overcome unforeseen circumstances that have derailed my races before.

I imagine that most of what I experienced that day could have been avoided had my goals for the day been about process instead of results. Result oriented goals—like the ones mentioned above—are disasters waiting to happen. Why? Because they are uncontrollable. Want to finish in the top 10? Awesome. But what if that kind of result is physically impossible? What if the field is stacked? What do you when you realize that there are at least 25, 50, 75 people at the race who are faster than you’ve ever been?

It is certainly a nice perk when races offer an added bonus for finishing under a certain time cut-off. Leadville is famous for its sub-9 belt buckles. But course conditions, unpreventable bike issues, and dumb luck can make a sub 9 finish almost impossible. As it is, only about 10 percent of the field accomplishes the feat every year. Which means that 9/10 racers at Leadville take longer than 9 hours to finish.

Process oriented goals, on the other hand, are controllable. They are independent of any other racers, weather conditions, mechanical problems, crashes, and any other of the various and splendid reasons that invariably hamper each of us on race day. These type of goals deal with attitude, fueling, pacing, heart rate, and preparation: course knowledge, equipment choices, and training.

I have no ambitions for the Crusher. I don’t have intentions of attacking or being in a breakaway or hammering to be the King of the Mountains. I do not plan to stand on any podium. I do plan to ride hard. To push myself into those dark places that every race of this magnitude requires. If I finish 45th, fine. 145th… again, fine. As long I’ve done all I could do, I’ll have a big stupid grin on my face at the finish line.

I’ve engaged myself heavily into preparing for the race. I’ve made most of my preparation public knowledge. I enjoy sharing the information. And even more so, I enjoy the conversations that it sparks.

I race my bike because I love to solve the puzzle of each event. Some are more straightforward than others. Some don’t require any research. And yet others are a veritable labyrinth of viable and varied possibility. Like the Crusher. At the start line there will be road bikes, ‘cross bikes, mountain bikes, and probably several combinations of the three. Frankenbikes. Why? Because nobody knows what the hell this event really is. And that’s what so great about it. It’s why the first year of an experimental event like the Crusher is a once-in-a-lifetime opportunity. Yeah, its just a bike race. But as a bike racer, this is what I thrive on. This is the ‘why’ that so many of us are always pursuing and grasping at. I want to solve the puzzle. I want to be part of the inaugural crushing of the Crusher.

My obsessive nature makes me a better bike racer.

In 2006 I raced the Kokopelli Trail Race. A 142-mile, self-supported mountain bike race from Moab to Fruita. We raced on pavement, dirt road, chip-seal, sand, and singletrack. I spent months studying the route. I poured over maps until I had every landmark memorized and knew every intersection and incline. I debated which tires to use. Which backpack to wear. Which lights? Water filter? Eventually, after a lot of testing and reading and scheming, it was time to pedal. On top of all the obsessive planning, I had also been training. I trained as well for that event as anything I’ve ever done.

I finished the race. In the top 10. It was, and remains, one of the most satisfying results I’ve ever had. Not because I finished 10th. But because I never would have finished at all without the planning and studying that I had done. The process was as important to me as the execution. And I enjoyed every minute of it. Much of my life is lived in the same way.

I didn’t write a book to make money. I wrote it because I love to write. The doing—the writing itself—was enjoyable, cathartic, educational. Similarly, I don’t race my bike to win. I certainly try to win. But I don’t base my enjoyment of the sport, or the process, on winning. I’d be miserable if I did.

Maybe you like to arrive at a start line wrapped in the fog of war. I get that. And I’ve done that. Some events, it’s simply not possible to learn or see or know everything there is to know. And sometimes it’s nice to be surprised.

But if studying tire choices or course profiles strikes you as detrimentally obsessive, I can’t help you. Nor would I want to.

As for me, I’ll continue to split hairs about tread patterns, rolling resistance and whether or not Piute Reservoir causes any lake effect head winds on US 89 between Marysvale and Junction. 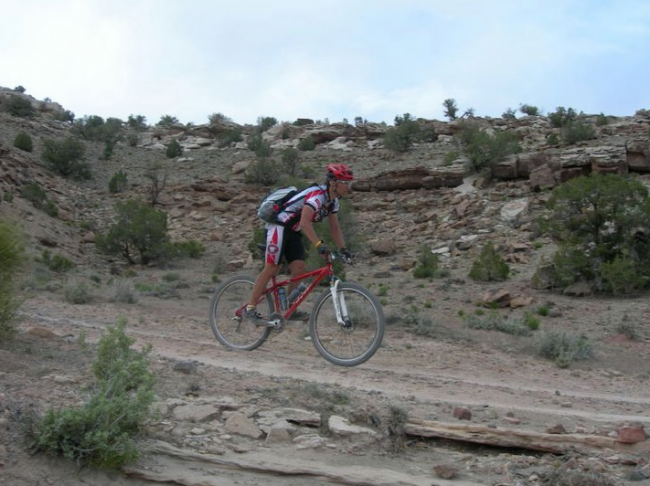