I like David Millar*. As much as I can like a man I’ve never met, never really cheered for, and know very little about.

*Thanks to Phil Ligget, I still pronounce Millar incorrectly.

But I like that he acted like a grown-up when he was caught cheating. Since then he’s been an outspoken anti-doping crusader. Any professional cyclist—especially one who wins now and again—that speaks out against doping (and who is actually clean), is a guy worth tipping your hat too. But recently Millar uttered some mind scrambling words:

Does anybody out there seriously doubt that Contador was riding clean in the Giro d’Italia that has just finished? You don’t win the biggest races in the world with such clockwork regularity and comparative ease, and in such style, by not being the supreme talent and clean. In my experience the profile of a doper is always much more erratic and unpredictable.

“You don’t win the biggest races in the world with such clockwork regularity and comparative ease…by not being…clean.” 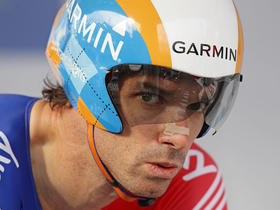 I would think that an easy Grand Tour win would imply that a rider is not racing clean.

However, it’s true that Contador is a supreme talent. He’s fantastic in the Grand Tours. Since 2007, he has won all 6 of the Grand Tours he’s entered. The only rider with a better streak? Lance Armstrong. 7 for 7. One might ask David Millar if Armstrong’s supreme talent (which he had) and comparatively easy wins were also obtained cleanly?

Contador has been very consistent. That might be a testament to his natural (un-enhanced) talent. Or it might be testament to his very good doping program. Consistency alone doesn’t prove that a rider is clean or dirty. I think, really, that Millar’s statement that “the profile of a doper is always much more erratic and unpredictable” is true. Except when it isn’t. As an amateur, age-group bike racer, my fitness levels are rather erratic. I think I train pretty well. I try to eat right. I build and taper and peak. But regardless, I have days that I feel amazing, and others that I don’t. And sometimes those days can happen back-to-back.

Isn’t the point of doping to eliminate the unpredictability of fitness?

Padraig at Red Kite Prayer, makes the argument this way:

Let’s do this like a geometry problem and lay out our givens:

3)   Gianni Bugno led the 1990 Giro start-to-finish. A strong case can be made that this was the first Grand Tour win courtesy of EPO. Pink from start to finish indicates no bad days.

4)   If we assume that the various allegations against Armstrong are true, seven victories at the Tour suggest he had no bad days (except for a couple of bonks).

5)   Before the age of oxygen vector doping we frequently saw riders deliver a spectacular day at a Grand Tour and follow it up with a stunning fold.

Baseball players do not have the best offensive seasons in history between the ages 36 and 39. But that is what Bonds did. He got greedy. Nobody ever questioned his talent. By the late 1990’s he was already a first-ballot Hall of Fame player. In his prime (well, his fairly natural prime—we’ll talk about greenies another day) he was a 30-30 (HR/SB) threat, played great defense, drew a lot of walks, and hit for a high average. He was (a jerk, even then) a fantastic baseball player. But his numbers fluctuated. That’s what athletic performance does.

In the graph below, Barry Bond’s career Slugging percentage is compared to Hank Aaron’s:

Through age 35, the numbers are similar, in that they fluctuate and change, but hover around each players career averages. Aaron had a career high in SLG (.669) and HR (49) at age 37. But neither number was fantastically different from his previous best seasons (.636 and 47, both in 1959). He followed up that season with an average year, had one more resurgent season, and then fell off the table before retiring. Just like Bonds. Except… Bond’s numbers exploded. And they stayed up in the stratosphere until he quit taking steroids and his body fell apart.

Athletic performance is fickle. Outliers exist. But over time, averages are revealed. Deviations in either direction from that average are reasonable under normal (drug-free) circumstances. But always being spectacular? That isn’t normal.

I’m not accusing Contador of doping. I’m pointing out that David Millar is dead wrong. Nobody wins Grand Tours with ease. And nobody is always the supreme talent. Even the best preparation, training, planning, and strategy fall victim to bad luck, stomach viruses, crashes, and the great legs of other riders.

I’ll finish with another quote from Padraig:

Everything we know about human physiology says that even when you’re at peak form you can’t ride around at threshold for six hours a day for three weeks. Everything we know from our own lives tells us we have bad days, even when we’re not on the bike. Bad days are a normal part of life.

Unless, of course, you’re cheating.

What do you think?