Everything I Know About the Crusher

Everything I Know About the Crusher

Crusher Special! The PDF version of Mythical and Tangible is on sale for just $1. Get it here:

The Crusher in the Tushar has occupied the mental capacity of those who have registered nearly as completely as it has the physical. The race is unique. Tricky. And the course, almost entirely a mystery. The Tushar mountains are (unfairly) a mountain range that are nearly completely overlooked by the larger recreational population. And I suppose that’s part of what makes them what they are—vast, empty, and filled with wildlife. The range is huge. Tall, snowcapped, and magnificent. They remind me of the La Sals of Moab.

I’ve spent a lot of time thinking about which bike to ride in the race. Which tires? Will I need to a bigger cassette? A smaller chain ring? New brakes? Ultimately those questions, while legitimate, were impossible to answer in any definitive way because the course was nothing more than a line on a map. I wanted to change that. And so, I set out to demystify as much of the course as I could. And why not? The legs needed the pedaling, and the eyes needed the seeing.

But the course covers 80 miles, and crosses the Tushar range almost twice. The top of the course, Big John Flat, is still snowed in. This was not going to be your everyday pre-ride. I needed a plan of attack. The monster downhill from Big John Flat to Marysvale has prompted the most questions, so I decided to start there. And since I was not in the mood to post-hole, there was only one other way to ride down into Marysvale: climb out of Marysvale first.

I left from the small town, and followed the course backwards until I ran into snow.

Which was at about 9500′. Just over 11 miles from Marysvale. Had I been in a more exploratory mood, I would have tromped through the snow for a little while just to see what there was to see. But I had plans to see the Junction climb. And so I turned around and bombed back to town. From there I crossed the gap into Junction, climbed 8 miles of the final ascent, and then turned around and rode back to my vehicle in Marysvale. In all, I rode 70 miles, and climbed 8,200 vertical feet.

Below is a detailed report on what I saw on course. It’s not exhaustive. I didn’t ride the entire route. But, nonetheless, it’s probably more than you knew yesterday. One note: All the photos and descriptions represent the route, in the direction we will race on July 16. I suppose it’s also worth saying that any significant weather changes, USFS work, or other unforeseen circumstances could change the condition of the route. Everything reported below was current as of June 18, 2011.

I have not seen this section at all. But I am including it here because I’ve spoken with a few people who have. The consistent theme in describing the road is that it’s steep. Big surprise. Spin a light gear. Your knees and hamstrings will thank you 60 miles later as you climb the steep grades out of Junction. I have heard that the USFS has been doing some work on that side of the mountain, and that the road is clear of debris and snow, all the way to Big John Flat.

I saw 11 of the 18 miles. My description begins at the highest point that I reached, and continues into Marysvale. The small dot on the map, is where I encountered more snow than I wanted to hike through, and where I started my descent. 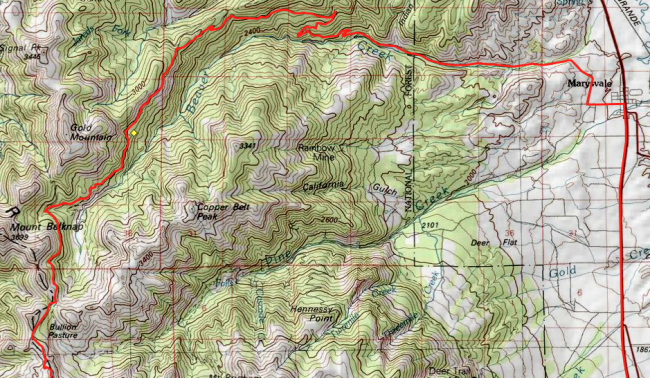 As you can see, I was well below the summit when I turned around. 2,000 vertical below. Pray for sunshine!

Based on what I observed, I’m dividing the Marysvale descent into two parts: The rough stuff, and the smooth stuff. On Saturday there were two gates, about a mile apart, that have closed the upper portion of the road to motorized traffic. The lower of these two gates is at the intersection with Kimberly Loop Road (stay right on race day) and marks the dividing line between the rough and the smooth sections. The road surface above the gate is hard, steep, and scattered with embedded rocks and debris (a few logs, loose rocks, sticks, pinecones). There was one fallen tree that required a dismount, and another that I rode around. There were also two snow patches. And like the trees, one I rode by, and the other was a quick hike-through. I don’t think either of those snowy patches will last much longer. 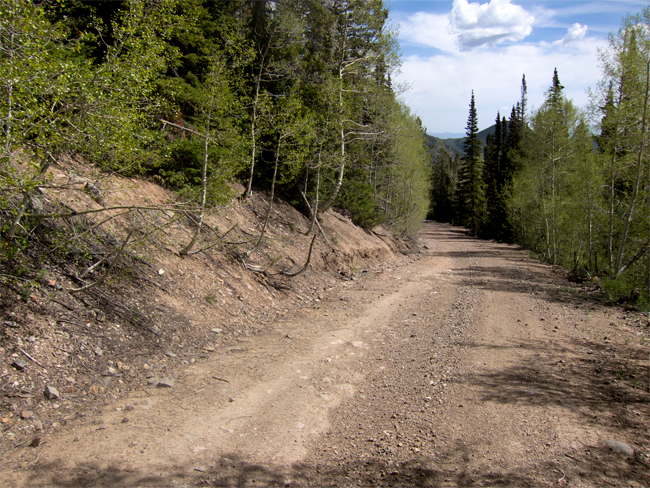 A typical segment of the upper Marysvale descent.

The upper portion of this descent will be rough. Especially so if no maintenance work is done before race day. And even more so, if snow is still lingering in any significant amount. If you are on a mountain bike, you’ll hardly notice the bumps and debris. And the steep pitches will seem tame. However, if you are on a ‘cross bike—as I was—you will need to pick your line carefully. If you’ll be riding with cantilever brakes, I hope you know how to crash. Because you will. Or at least… I would. Which is why I installed some CX-9 Mini V brakes. And they worked quite well, even on the steepest and loosest sections of the road.

Below the gate the road changes dramatically. It is much smoother, and is covered in a nice layer of gravel. Which makes the cornering a little nerve-racking. Luckily, there aren’t many corners. In fact, a majority of the lower half of the Marysvale descent is a bomber straight-shot into town. Your speed will be determined by the steely mettle in your spine. The closer into town you get, the softer the gravel becomes. Oh, and watch out for ATVs. This is a narrow road with several blind spots. 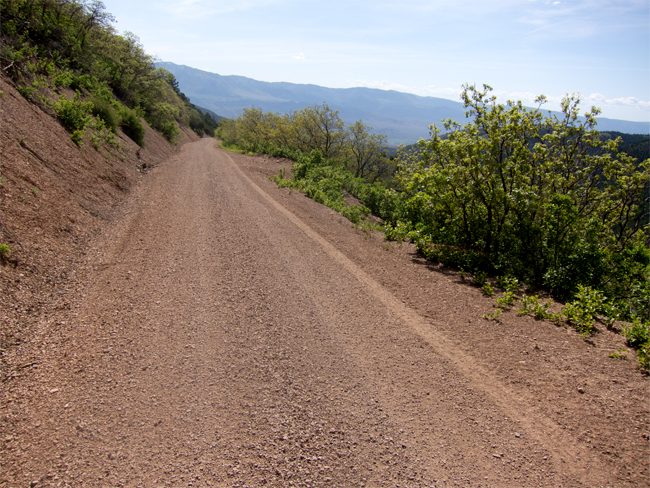 The lower half of the Marysvale descent is covered in loose gravel. 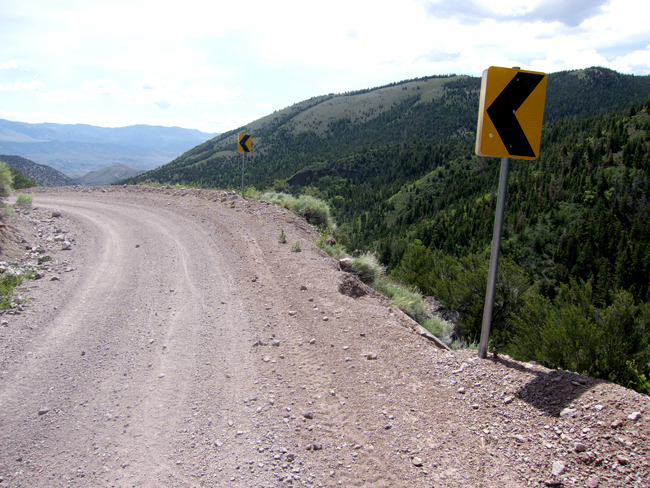 This is not a corner you want to overshoot. 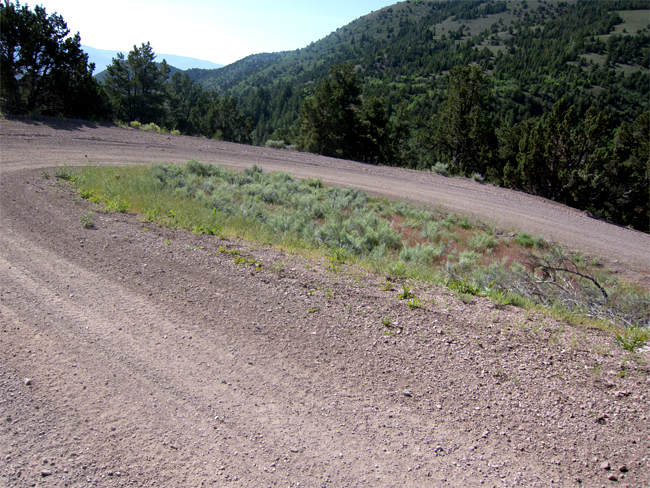 One of just a few switchbacks.

I only rode 11 miles of the downhill. When I arrived back in town, my hands were sore from the constant braking. This is a very, very long descent. It’s also the only miles of the entire race that do not require pedaling. So enjoy it while it lasts. 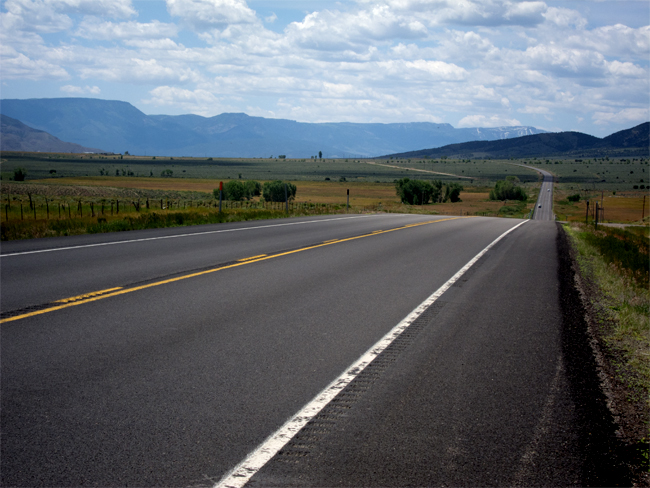 Bring a friend for the rollers.

Grab a wheel. Or 5. If you are alone, it’s a good place to fuel and spin. I had a headwind. Which means we will have a headwind on race day. The shoulder is wide and clean and smooth. The highway doesn’t see a lof traffic, but it does get some. A few 18-wheelers, RV’s, trucks with boats or trailers. Hopefully on race day there are is a car or two patrolling this stretch with “bike race in progress” posters.

The link between Marysvale and Junction is a stark contrast from the riding we will have already done. The views are nice. But Junction doesn’t seem to get any closer. It’s not until you lay eyes on Piute Resevoir that you are starting to get close. And even then, you’ve got a few more rollers to ride before you’ll arrive at the feed station. 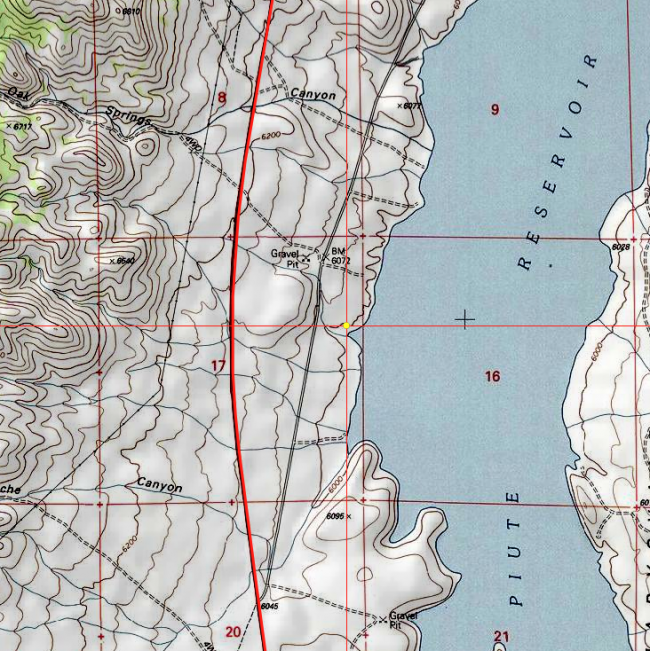 For some reason I had pictured the climb out of Junction to be lined with aspen trees, pines, and alpine goodness. It isn’t. At all. At least, not in the first 8 miles. It is, instead, rather barren and absolutely exposed. No shade. None.

The climbing is gradual at first. Barely there. The grade increases gradually, but it’s never too steep for the first 6 miles. All of which are paved. But when the pavement ends, so do the gentle grades. The dirt road is wide, with a thin layer of gravel on the surface. Some of the inclines were steep enough that my 34c, overinflated rear tire would slip if I stood out of the saddle. At this point I had around 45 miles in my legs. On race day, we will have 60. And more vert. I mashed up the hill until I couldn’t anymore.

Another note to self: Get a 34T chainring.

I rode as far as the sweeping right hand turn on the map below. Above me, I could see the road switching up steeply to Grindstone Flat. 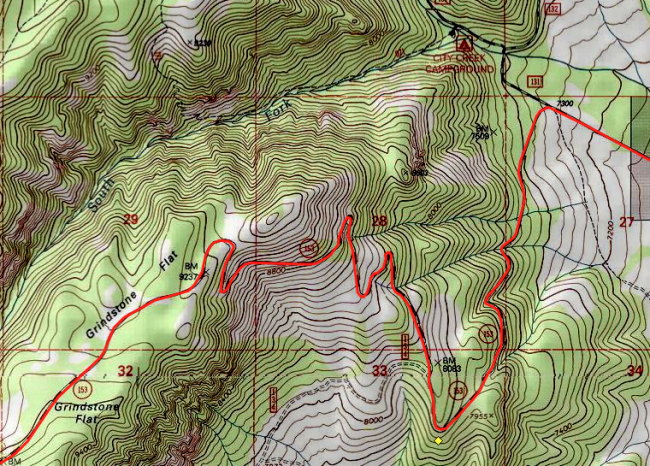 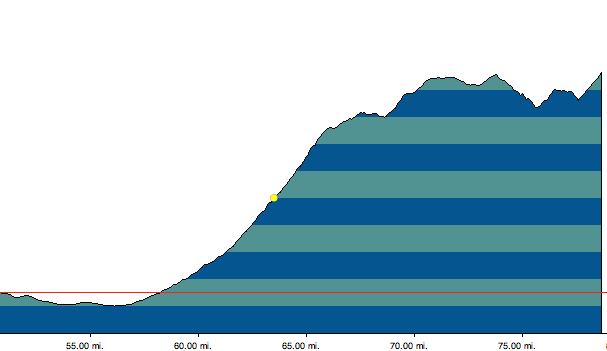 I was cooked. And 20 miles from the car. Above me however, was still a lot of Crusher. I turned around and decided I’d have to see the rest of the course on race day.

When you leave Junction, you’ll be staring at this: 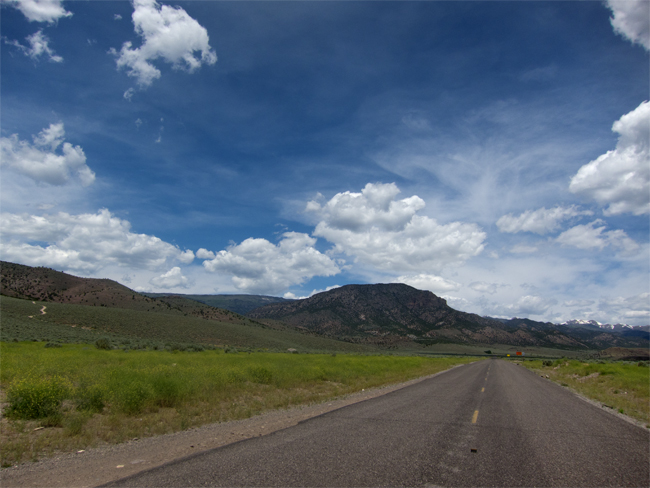 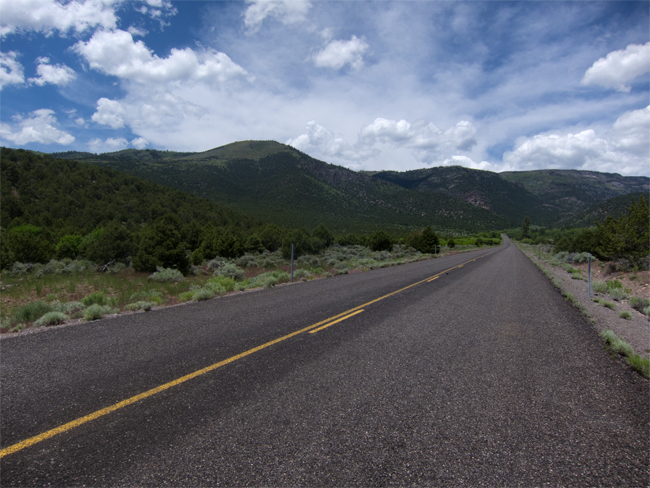 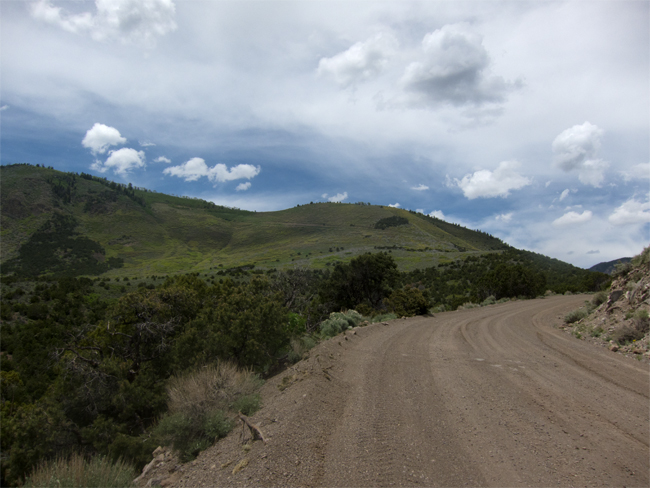 And yes, that thin line scraping the horizon in the photo above is the road. It really is. 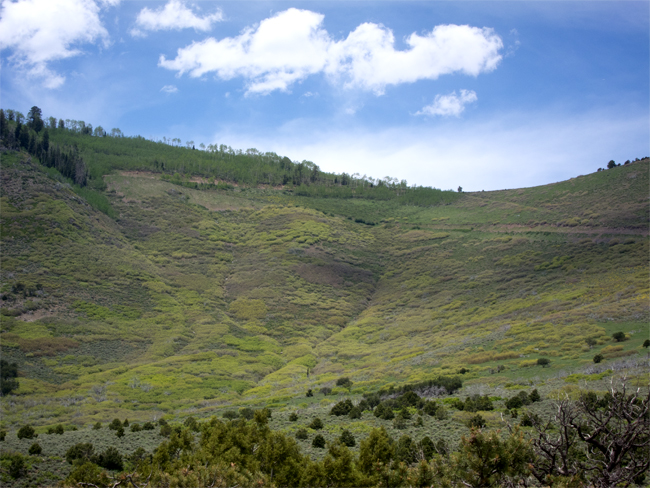 Is still a mystery.

However, one thing is not a mystery. And that thing is this:

Anyone who conquers the Crusher will need to climb like a mountain goat. 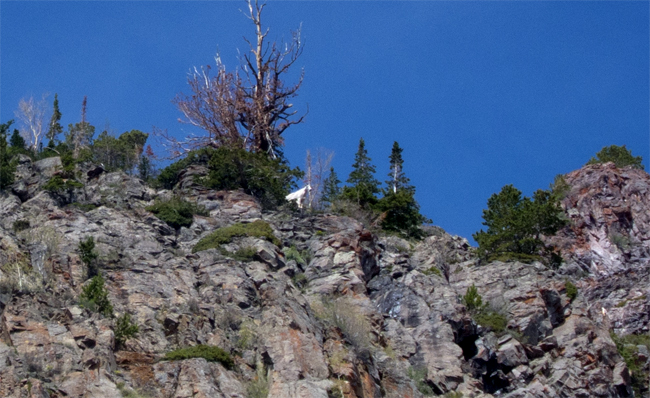