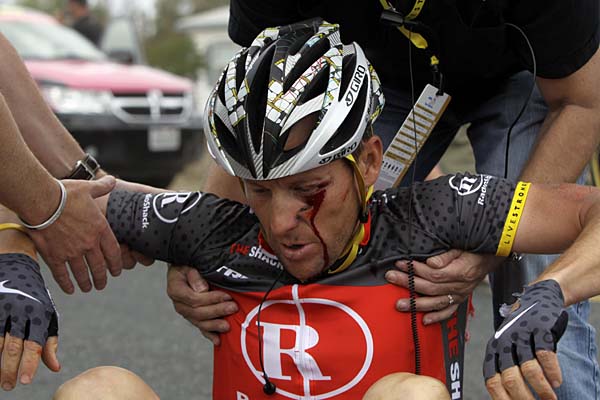 From a must read article in Cycle Sport Magazine:

Armstrong had been diagnosed with cancer. Not only did he beat that disease, one that touches so many people directly or indirectly and so strikes a very real chord with all of us, but he came back and won the Tour de France. Not once but seven times. In a row.

It was a miracle. The sporting story of not just this generation but any generation. A Hollywood tale that wasn’t projected onto a silver screen but took place on the road – and you could go and watch. You could be part of it. You could yell in his ear and contribute in a small way to the drama.

It was hardly surprising the sport of cycling and its authorities also rallied behind Armstrong. They saw the commercial success he had created, marvelled at the riches he attracted, and wanted to bathe in the trickle down.

And together we all allowed one man to dominate the sport, to its detriment. The Tour de France became the Tour de Lance. It was just a moderately amusing pun at first but soon it stood for more. No man is bigger than the sport, you say? Well, Armstrong came closest of all to being just that, certainly in the eyes of people who do not follow the season from Het Nieuwsblad to Lombardy.

Some say that this entire investigation is a joke. In a way, I agree. But I also find it fascinating, entertaining, and sad. It has the potential to reveal the greatest deception in sports history. Any sport. Any history. Nobody has captivated an audience like Lance Armstrong did. Nobody has inspired more fat, unhealthy, couch guardians to get up, spend $5,000 on cycling gear, and ride a bike. Nobody won 7 Tours. Nobody used those Tours to promote the fight against cancer like Armstrong did. His victories were not merely the pursuit of athletic excellence. They were crusades. He was a missionary, a holy warrior. And that mission made him into a saint, beyond reproach, question, and suspicion.

I bought into it. A little.

But charity work is hardly justification for cheating and lying and deception.

Armstrong’s claim of cleanliness started to erode when his staunchest rivals all tested positive for EPO and other substances. And then so did many of his teammates. Even if Lance is clean, he was aided and abetted by men who were not. That alone is enough to cast a dark cloud of doubt over those 7 yellow jerseys.

And then people started pointing fingers at Lance.

“Where’s the evidence” Lance Armstrong has repeatedly asked, “where is there evidence of doping?”

The yellow jerseys themselves are the greatest damnation of all.

In those 7 Tours there were 8 different riders (other than Armstrong) who stood on the podium. 7 of them are confirmed cheaters.

How did Lance Armstrong beat men who were using EPO, testosterone, and growth hormones? Somehow, I don’t think Chris Carmichael’s Train Right System had anything to do with those victories.

I find it alarming how quickly Lance Armstrong will absolutely destroy anyone who suggests he is a liar and cheater. And I mean anyone. Including random Twitter users. Want to get Lance Armstrong’s (or at least one of his staffers) attention? It’s easy. Just suggest on Twitter that he isn’t who he says he is. You’ll be blocked within the hour.

But men like Landis and Hamilton are publicly derided, their motives questioned, and their character maligned. Perhaps that kind of reaction is justified. But it isn’t endearing. I’d suspect that an athlete less self-obsessed would express sadness or regret when a man once considered a friend becomes an enemy. But Armstrong immediately dismisses the accusations, and the men making them, as fraudulent. The Posties are, much to Armstrong’s chagrin, not Greg Anderson.