I'm Grizzly, and I'm a Zero

I’m Grizzly, and I’m a Zero

Today only, get 20% off a purchase at Lulu.com with the promo code LUCKY. May I suggest Mythical and Tangible: Tales of Life, Liberty, and the Pursuit of Singletrack. Also, today only, Twin Six is donating 50% of all sales to Livestrong. So now you can help fight cancer, and look really good at the same time.

Last week a secret list from the UCI was “leaked” to the French tabloid L’Equipe. The list classified, on a scale of 0-10, several riders from the 2010 Tour de France. The scale is a numerated quantification, no doubt scientifically generated, of how suspicious the UCI is that an individual rider is involved in doping. 0 = not suspicious, 10 = very suspicious. Like I said, it’s very scientific. As the news of the list spread, riders reacted with indifference or anger, depending on the ranking they received.

“I am totally outraged,” steamed Alberto Contador, who is currently wearing the maglia rosa in the 2011 Giro d’Italia, “I was ranked as a 5. What a joke! Everyone knows that I ought to have been given a 9.”

David Millar was equally offended. “After the swimsuit annual, I’m going to cancel my subscription to L’Equipe. I mean, I know I served a 2 year suspension for doping, but come on, to rank me as a 4, on the same level as Lance Armstrong, is just insulting.”

A UCI press release stated simply that “We regret that this list has been made public. But we do love the attention.”

Denis Menchov, the 3-time Grand Tour winner, and the only rider ranked at level 9, was downright boastful when told about the list. “I’ve been ranked a 9, on a scale of 0-10? That’s nothing new. Just ask any podium girl!”

But how terrible are the riders given zeros feeling today? Certainly that sort of ranking endears the riders to the fans. Who doesn’t love a clean racer? But not to demand any suspicion from the world’s most ineffectual governing agency must be rather frustrating for many of the zero’d out riders. It’s as if the UCI isn’t even sure whether or not these racers are still actively riding.  “Yeah, we handed out zero’s to riders that are, more or less, invisible.” A man outside the UCI offices, who was presumed to be a spokesmen for the organization said, “Are they even out there racing anymore? We could not find them on any podiums. Trust me, we looked.”

“I’m a little irked about being ranked as a zero” said Dave Zabriskie, “I’m a pretty popular guy in the peloton. I have my own viscosity cream. I wore the maillot jaune. I’ve finished 2nd in several Tours of California. A zero? It just doesn’t make any sense. How do these guys not know who I am?”

“We know who Zabriskie is”, the spokesmen at the UCI insisted. “Of course we know him. He once had a very nice mustache. It’s just that California, as impressive as those results are, is very far away. And really, we wrote Dave off the minute he crashed wearing the yellow jersey. It’s nothing personal. Nothing personal at all. The list is simply another way for us to continually drum up mistrust and anger from the peloton.”

“We will get this straightened out. Dave [Zabriskie] deserves to be ranked a little higher on this list.” explained noted hipster and Zabriskie’s Garmin-Cervelo team manager, Jonathan Vaughters, “At least a 3 or a 4. He’s a great bike rider. Is he a 5 or a 6? Not yet. But a zero? Give me a [bleeping] break.”

What’s this all have to do with me?

Saturday, I was lined up at the start line for yet another Intermountain Cup cross-country race. This one at Soldier Hollow. The course we were all about to race was a lung buster. Short climbs. Long climbs. Several climbs. And fast. This was not the technical course that it had been hyped as. No. It was fast and demanding. But only if you had the legs to make it so. Otherwise, it just hurt. For a very long time.

I glanced around at my fellow racers. I started to mark each of them.

“Who’s that guy? He looks fast. Look at those legs.”

“Ah, shouldn’t need to worry about him today.”

Because, none of them were marking me. And if they were, it was with the “don’t need to worry about that guy” tag. For most of my competitors I am a zero. That is, I have done nothing to warrant their attention. Noting at all. And in the end, ignoring me was exactly the right decision. When I finally rolled across the finish line, those I had marked were chatting easily, and looking remarkably recovered. “They look really good for only having just finished”, I thought to myself as I rolled up to the group—hoping that fitness by association actually existed.

“What was your finishing time?” I asked one of the riders.

“2: thgbming” I mumbled. Oh. So that’s why they looked so recovered. They’d been there for 15 minutes. “I’m going to spin a little bit.”

In my mind I tried to do the math.

“Let’s see, if I carry the one, and then add in the wind resistance factor… I really was not that much slower.”

But then, I never was any good at math. Indeed, I can relate to those riders ranked as zero’s by the UCI. My results do not attract any attention. Whatsoever. I’m a non-entity. At least during the race. Afterward however, it’s a slightly different story.

“We like to keep Adam around,” said 19 year old Tanner Cottle, “he tells us stories from the old days.” 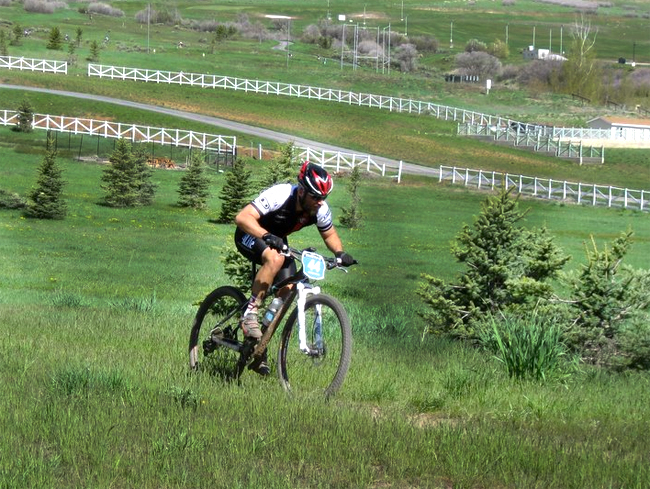