An Open Letter to Gro Promotions

An Open Letter to Gro Promotions

This open letter might need an explanation. Gro Promotions is the promoter of the True Grit 50 mountain bike race in St. George, Utah. The inaugural version of the event took place on Saturday, March 26. 30 minutes into the race, the skies opened and the rain began to fall. It didn’t stop for several hours. The course became wet, slick, and muddy. Many riders dropped out of the race due to mechanical issues with bikes, or because they had had enough of the cold and wet. Nevertheless, several other riders—including myself—pressed forward, hoping to best the weather and the course conditions. About 4.5 hours into the event I was informed that the race had “been called off”, and that even if I continued to ride the course, that I would not be given a result. I had ridden 45 miles. Only 10 riders have been counted as official finishers.

I would also like to thank all the volunteers who lubed chains, refilled bottles, rang cowbells, and directed traffic in the miserable weather. Your efforts were well appreciated!

At this moment my mountain bike is dirty. Very dirty. I’ve already cleaned it once, but it will need another good scrubbing—and some new parts—before it runs as well as it did before the True Grit 50 on March 26th. I’m a little irked that I will likely need to replace parts of a drivetrain that is only a few weeks old. But that’s racing. In fact, I’ve been in this spot before. Bike parts get ruined. I have nobody to blame for that but myself. I chose to ride in the race, knowing that the course could be wet and muddy. When the rain did start to fall, I could have chosen to quit. I could have saved myself a lot of money and time had I done so, and I could have been warm and dry hours sooner than I was. But I didn’t choose to quit. I kept racing. Because, that’s what mountain bikers do.

I don’t win many races. Allright, I don’t win any races. But I keep entering them. I continue to train and plan, and scheme. I line up at start lines with all kinds of delusions of grandeur. And every race, regardless how long, or difficult, or competitive, I am reminded—sometimes abruptly—that I am not an elite rider. My race is against my own expectations and my own limitations. Every mountain bike race I do is a personal battle. And for the vast majority of us, that battle is the heart and soul of our racing. If we were racing only to win, we’d have quit long ago. No, we race to finish.

Finishing is the best that most of us can ever hope for.

Saturday I was denied the opportunity to finish your race.

That the hard work—45 miles and 4.5 hours—I had done was all for nothing, made me angry. Really angry. My bike was in bad shape, but it was working. I was cold and wet and muddy. I was hungry. One of the rails on my saddle was broken. I was bruised and battered. But I was still racing. A lot of us were. I would have finished the race. Many of us would have finished. Instead, the race was shut down and each of us given a DNF. Did it never occur to any of you that riders were still on course who were willing and able to finish?

I’ve been racing my bike for a long time. I’ve been to events that have been truncated or abbreviated. I’ve been to races that had to be postponed or rescheduled. I’ve seen attrition rates skyrocket because of mud and torrential rain. But I’ve never seen those who were still racing be dismissed and banished the way we were at the True Grit 50.  I’ve quit races. I’ve ripped derailleur hangers off of frames. I’ve broken chains. I’ve bent wheels. I’ve puked, and have been lost, unmotivated, wet, cold, and bewildered. But—up until now—quitting a race has always been my decision.

I understand that many safety and trail issues became serious problems during the race. However, there were three possible solutions for the dilemma you faced:

1. Re-route the course. From feed station 2, racers could have easily descended the gravel road to pavement, and ridden the road back to the finish (many did just that).

2. Shut down the race, but move the finish line to feed station 2. Any rider who reached that point (after completing both Barrel Roll laps, although sending us out there twice was a head-scratcher) would be a finisher.

3. Shut down the race, and count everyone that had not passed feed 2 twice (when the decision to end the race was made) as a DNF.

Of those, option three was chosen. Why?

When I was told that the race was over, nobody bothered to write down my name and plate number. I was given no explanation why the race was shut down. I’ve still not heard any official explanation why the race was shut down. Obviously the weather was bad, but it had been bad all morning. Why close the course when so many of us were so close to finishing? Why were we not given the choice to continue racing—even on a re-routed course—and earn an official result?

I’m often asked why I race my mountain bike. Why bother with the pain and the effort and the expense? I’ve tried to answer that question, and have never been adequately able to do so. In fact, it’s a question I’ve often asked myself. I race, and I love it. Why? Why not? I love the uncertainty and the risk. I love overcoming the fear and the doubt. I thrive on the competitive pursuit and the small chance that today I will ride the best race I’ve ever ridden. I don’t win races, but that doesn’t mean I don’t try to win races. Despite the rain and the crashes and the heinous conditions at the True Grit 50, I never asked myself why I was out there. Not finishing had never even occurred to me. I had put too much effort into the 45 miles that I did ride, to be turned back by the few that lay ahead.

I feel entirely cheated. I rode 45 miles. I suffered in the rain and the mud. My bike is damaged. And for what? I did all the work for none of the payoff.

Later, while racers were enjoying the post-race meal at the finishing area, you had the audacity to recognize the riders who did finish the race as those who had “true grit.” I nearly choked. It’s true. Those riders rode hard and fast. They always do. I count many of them as friends, and I am proud of the result they each earned. But just behind them on the course were other people that rode through the same mud, and the same water, and over the same technical trails that they did. Riders who overcame mechanical issues, fatigue, crashes, and the pounding rain, all for a chance to be counted among those finishers. A chance to finish what we had started. The possibility of finishing is the reason we rode through hell and back. It’s why we ruined our bikes. It’s why we kept pedaling, despite frozen fingers and toes and mud-caked jerseys.

I came to the True Grit 50 to finish. And I would have finished, if only I were given the chance. 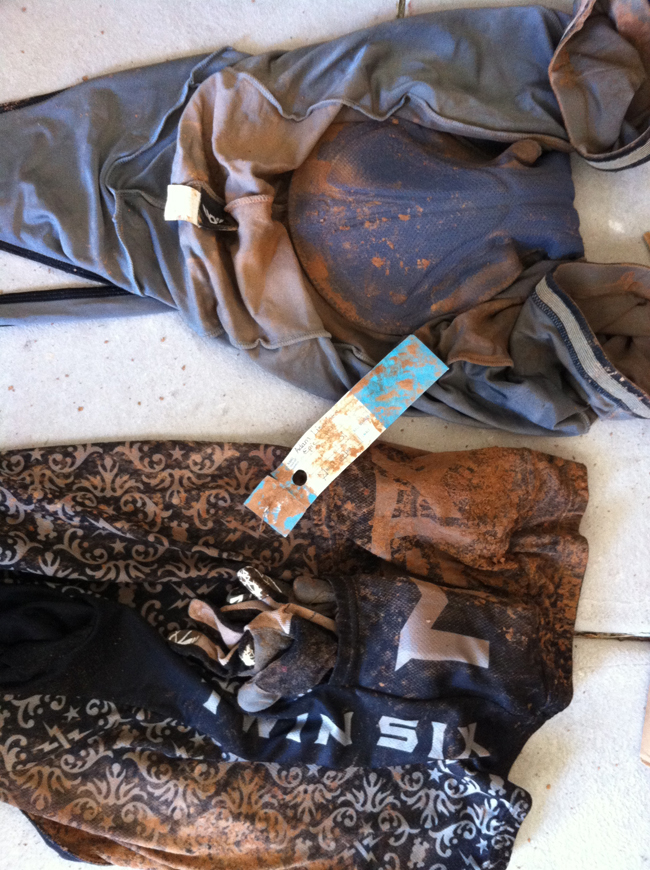