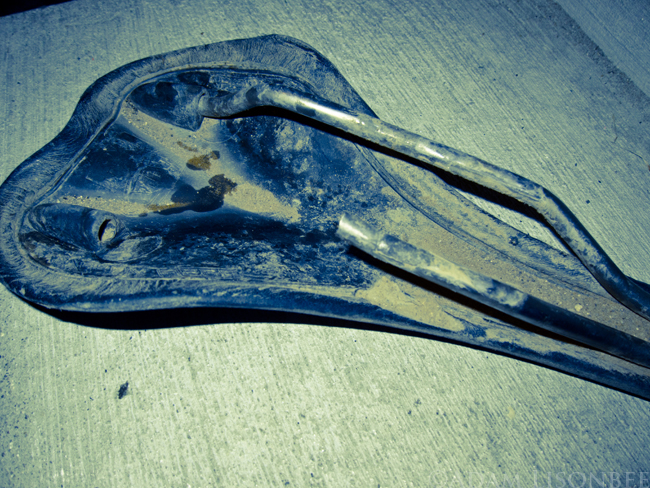 “I love this saddle. Best I’ve ever owned.”

The next day I was racing along the Stuki Springs Trail (before it became an unrideable disaster), about half-way through the race. I was feeling good. Really good. Ahead of me I could see the group of riders that snuck away from me on Zen. I was gaining ground. I rode through one of the gazillion little compressions on Stuki and heard a “pop”. My saddle became wiggly.

I kept pedaling, trying to figure out what had happend.

The seat wasn’t going anywhere, so I kept riding, and eventually caught the group. It wasn’t until I hopped off the bike at the feed station to clean and lube my chain that I saw the damage: one of the rails had snapped.

I rode 12 more miles—about 20 in all—with the broken rail.

It was a good seat. Comfortable. Light. Slick. It served me well in the Dixie Lite, the Point 2 Point, 24 Hours of Moab, and several muddy, wet ‘cross races. It survived Camp Lynda and nearly survived (like the field of racers itself) the True Grit 50. Yeah. It was a good seat. In fact… it’s going on The Wall with my number plates, medals (the few I have) and other memorabilia—including the Gary Fisher X-Cal frame  I rode in the 2006 KTR—from races past.

Time to get a new saddle.  Maybe this one?