The Book is Done. Almost.

The Book is Done. Almost.

A little more than 2 years ago I set out to write a collection of essays. Originally I had planned to write 12 of them—one for each month of the year. However, as the project slowly progressed, I realized that I had nothing to say about February. Or November. Or rather, much of what I might write about November, would apply equally to October. June and July? What’s the difference?. The original idea was good (I think) but the implementation became strained. And so I consolidated from 12 essays to 4—one for each season. Doing so was one of the better ideas I’ve had (although you will be the final judge of that) because it instantly gave the project a structure that I could wrap my scattered and easily distracted brain around.

A few days ago I wrote the final paragraph of Winter, which is the final essay.

In other words: I’m done.

I’ve started the proof-reading process, and will have my editor (my wife—but hey she is a professional editor!) start editing very soon. Which reminds me… I ought to let her know. In addition to that, I’ve begun to select photos that will accompany the text. Bright, full-color, high res photos. My hope is that the final product will be a polished, worthwhile source of thought and entertainment. But again, you will have the final word. At least, I hope you will. (Buy the book!) I am planning on a May 1st release here at GrizzlyAdam.net and possibly elsewhere. I am still reading up on the different publish-on-demand and eBook services.  The book will be available as a PDF, and I hope, in a Kindle and iPad friendly format as well.

I would be lying if I told you I was not excited. Not because I think the book is spectacular (at this point, I have no idea anymore) or that I have any delusions of mass consumption (I might, however). No, I’m excited because this is something that has nagged and nipped at me for a long time. Being able to see the end is a satisfying place to be.

I could go on about specifics, but I’ll keep you guessing (or not caring). However, if you’re a regular reader of this blog (thank you!), then you’ve already read some of the content. Or rather, you’ve read the rough, embryonic versions of that content. I’ve tried to refine and enhance what I have written here, that has been included there. But if you are so inclined, you can read this excerpt, or my post from last spring titled Paradox: The Bearded Mormon.

Oh. The Title? I’m glad you asked. The title of the book is Mythical and Tangible: Tales of Life, Liberty, and the Pursuit of Singletrack.

Posted below is a small sample. It’s an excerpt from Winter. Leave a comment, and let me know what you think.

Winter is here. The snow storms have filled the cirques and the canyons. The trees huddle together, fighting off the wind and the frozen rime-crusted captivity that has engulfed and imprisoned them. The tall evergreens hold the snow in their wide branches—natural baskets of creamy, winter gold. The brown and green of summer and the blazing orange and red of autumn have been eclipsed and erased by a blinding blanket of white. The greatest snow on Earth.

For most, winter is a prohibitor of mountain exploration. But for the backcountry skier, it is an enabler. And the mountains themselves a refuge.

The mountain as a sanctuary is not a new concept. It is, instead a transcendent consistency spanning time and culture and continents. Primitive, remote, and wild, the mountains can connect people with the archaic, primal idea that man and nature are symbiotic. There is metaphorical congruence in the idea of the mountain as a holy, sacred place. A temple. Paulo Coelho wrote in The Fifth Mountain that “The Lord often has his prophets climb mountains to converse with Him. I always wondered why He did that, and now I know the answer: when we are on high, we can see everything else as small. Our glory and sadness lose their importance. Whatever we conquered or lost remains there below. From the heights of the mountain, you see how large the world is, and how wide its horizons.”

The Rocky Mountains served that purpose for Mormon refugees in the 1840s. A place to leave behind the brutality and complicity of mob-rule and violence that chased them through the United Sates. But the peace and the clarity of the Rockies came at a high price: The lives of Joseph Smith, Jr. and his older brother Hyrum—murdered at Carthage Jail in Illinois.

Battered, but determined, Brigham Young led the faithful from the ashes of Nauvoo to the naked, lifeless shores of the Great Salt Lake. One wonders if either was much better than the other? But eventually the death of the valley surrendered to the vitality of the mountains. Timber for homes and water for crops were harvested and tamed. Life, precariously uncertain for a time, prevailed after the tribulation and hard work of a people who came to value and sloganize “Industry”.

And when construction of a temple commenced, the wandering in the wilderness officially ended. As Isaiah had promised, the mountain of the Lord’s house had been “established in the tops of the mountains.”

The Rocky mountains—my mountains—anchor the American West. They are also the anchor of who I am. I think and see with clarity and alacrity while in the mountains. Ideas, solutions, thoughts, and insight all flow easily in the realm of timber and aspen and altitude. There is a reason ancient prophets substituted man-made temples with mountain peaks.

Moses and Sinai are the iconic examples. But others—more obscure and especially within Mormon mythology—have ascended to the mountains to commune with God. On some level, though less lofty and more personal, I am doing the same. Today’s Mormonism is much more institutionalized; that is, we worship in churches and temples, rather than mountains. That has come from a product of order and organization. And there are benefits to that method of worship. But there are also benefits to finding and seeking God in high places.

That is why I am attracted to the outdoors. I do not feel the fiery protectionism of environmentalists. I dismiss the authoritarianism of global warmists. There is only hate and confusion and money-lathered politics on that road. Rather, the outdoors, the wilderness, is a place of peace and clarity, and ought to be treated as such. However, the land is also resource—a means to the comfortable existence that today allows for recreational exploration and exercise. Hiking. Camping. Skiing. Mountain biking. The hard-earned existence of my Utah progenitors has provided me with the privilege and leisure that I readily enjoy today.

Indeed, it is disingenuous to criticize the mining and the milling in which those first settlers engaged. Their survival depended on the bounty of the mountains. And today the life and the city that those same activities help sustain are the currency that allow each of us the time and energy to make environmentalism—or skiing, hiking, or mountain biking—a priority at all. Proper use of the land—and its abundant resources—is critical to our progress and survival as a civilization. Is there not ground on which to stand that ensures the survival of both human industry and the pristine of the wilderness? 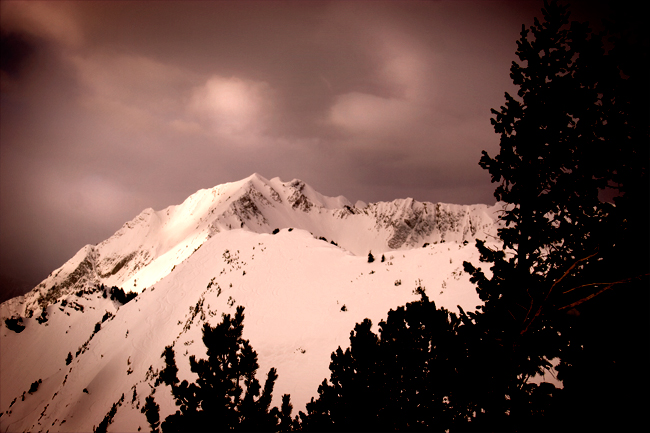