You might have noticed some minor changes here. Chief among them is that my domain has changed. Epic Riding is now GrizzlyAdam.net. And thanks to some technical voodoo from Jeff Higham, I was able to change the domain without the need for any of you to change or update blogrolls or bookmarks. Even the archives display the new domain. Something called a 301 redirect. Whatever that is. Next week I will go into a little more detail about why I made this change, and what it means for the future of this space. 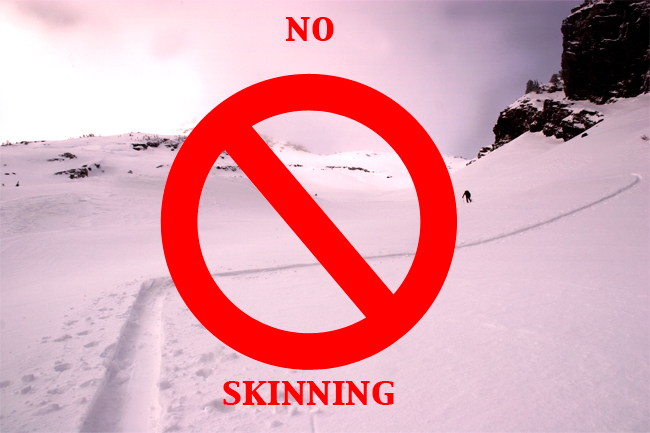 Roland Fleck, a 78 year old backcountry skier was arrested at Jackson Hole Mountain Resort for skinning against traffic. That is, uphill. He did not go down easily—it took 7 patrollers (and 2 pairs of handcuffs!) over 3 hours to forcefully remove Mr. Fleck from the mountain.

Roland Fleck has always been a big supporter of the ski area but believes he has a right to ski uphill, Dan Fleck, an attorney with The Spence Law Firm who is representing his father, said.

“He was within his rights to access the forest, and he was skiing safely,” Dan Fleck said.

Roland Fleck simply wanted to combine exercise with an outing to his granddaughter’s ski race, Dan Fleck said, and he had no intention of stealing a lift ticket or stealing a ride on a lift.

Ski patrollers told deputies who responded to the resort Saturday that a 78-year-old skier defied their orders to stop skiing uphill, skied over several patrollers’ skis, refused an offer of a free day pass and refused to leave the resort, sheriff’s Capt. Scott Terry said.

Deputies were transported to Roland Fleck’s location at the NASTAR course under the Casper Lift in a toboggan, Terry said. They told Fleck skiing uphill was a violation of Wyoming law and that it is considered unsafe, he said.

They asked him to meet them at the base of the mountain so they could issue him a citation, but he refused to cooperate, Terry said.

Deputies arrested Fleck and used two sets of handcuffs linked together behind his back to restrict his arms, Terry said. They sat him in a toboggan with a deputy as ski patrollers sledded him down the mountain, Terry said.

The trespassing charge likely would apply to Fleck because resort regulations prohibit skiing uphill and the resort has a right to ask someone engaging in prohibited activities to leave, Terry said.

Because the resort assumes liability for all activities inside the permit area, it has the authority to regulate what can and cannot be done there, he said.

Incidentally, the article quoted above has a rather lot of “he said” and “they said”. Perhaps more facts about what happened will shed more light on the event.

I think it’s fairly clear that Fleck was engaging in an act of defiant civil disobedience. Had he been genuinely unaware of the policy he’d have acquiesced to the original demand to cease and desist. Instead, he decided to make a point. And it’s a good point. That is, our public lands are hardly public are they? Our access to them is based entirely on the whimsical approval of the owners land managers. In other words, “public” is entirely conditional. In this specific case however, it’s obvious that the ski resort had been granted some jurisdiction to enforce safety and other regulations within the boundaries of the resort. Regulations that Fleck was probably well aware of, and was (deliberately?) flaunting.

The incident, beyond being rather tyrannical and violent—was brute force really necessary?—has sparked a conversation within the backcountry ski community about the merit of skinning regulations. And that’s a good thing. It has also reignited the somewhat tenuous tolerance that resort managers and backcountry skiers reluctantly grant one another.

What do you think? Was Roland Fleck within his rights as a citizen? And what do you think about uphill ski laws? Specifically, those laws being enforced on land that is—nominally—public? Or, as Dave asks “to what if any extent does a private company have rights to restrict activity on public land which they merely (for however long) lease.”