“These are the times that try men’s souls.”

Those were the words of Thomas Paine. He wrote them December 23, 1776. He continued, “Tyranny, like hell, is not easily conquered; yet we have this consolation with us, that the harder the conflict, the more glorious the triumph.”

And while Thomas Paine wrote of real and oppressive tyranny, I am today, thinking more of the self-imposed—if at times soul-trying—tyranny of modernity. Of job, and culture, and society. Of the tether of connectivity and over-sharing. And it’s true, I recently praised in vaulted terms the collective effects of the web. And I stand by those words. But nonetheless, at times it becomes necessary to disappear, to escape, and to leave behind the technological yokes that we have so gladly placed upon our shoulders. To reduce “needs” into the very basic essence of the word: Food, shelter, fresh powder.

And that is why right now I am somewhere in the Pioneer Mountains. Unconnected. Unplugged. Gone Galt.

John Galt is, as you probably know from high school English class, the iconic character in Ayn Rand’s melodramatic classic Atlas Shrugged. To Go Galt is to check out. To remove oneself from the systematic bureaucracy and to refuse participation—in Rand’s specific meaning—in State-enforced mediocrity. It is to be excellent in a world where excellence is penalized and punished. And in that sense, it is a sentiment that I wholly embrace. However, in the more rudimentary definition—dismissing oneself from society—it is a rather unhelpful means to any beneficial end. But the temptation to do so at times is irresistible, and one that we all ought to succumb to, if only temporarily. Even if it’s in the simple manifestation of a rented Yurt in the shadow of Hyndman Peak.

Frankly, I can’t think of a better way to fight the tyranny of modernity. Or, if not to fight it (it always wins anyway) then to deny, to slow, and to prove that it isn’t the necessity it thinks it is. Or that we think it is. To demonstrate that we—as a species—can thrive without the constant buzz of electronic notification. But, alas, only to a point. After all, I do have with me my GPS, SPOT, avalanche beacon, digital camera, down sleeping bag, LED headlamp, and high-tech ski gear.

I do not miss the persistent chiming of the phone, or the overbearing absurdity of Facebook. That I am not on the other end of your status update is no burden to me, and should not be to you either. No, step into the outdoors. Even in bad weather. Especially in bad weather. Let the snow swirl in a dizzying, vertigo inducing display of force and power. Feel the burn of the cold wind or the sting of winter rain. Embrace the heavy heat and the violent summer storm. Explore. Experience.

But not only that. But because you are there. Or can be. Go. Just go.

In his essay Freedom and Wilderness, Wilderness and Freedom Ed Abbey wrote “By whatever means, in some caes by any means, escape this crazy, unbearable, absurd playpen of the senses…thrust upon us by CBS News, Time, Newsweek, the New York Times, Rolling Stone, and the Sierra Club Bulletin…”. One can only guess what Abbey might add to that list today, in our world of social networks, cable news, and the incessant game of thrones being played in the corridors of Washington D.C., New York City, and Hollywood.

And so we climb into the mountains, or descend into the deserts. We wander and aimlessy explore. We look around the corner or over the horizon. Because it’s there.

True enough. But tyranny has underestimated the power of  a yurt in the woods.

I’ll be back Thursday with pictures and stories. 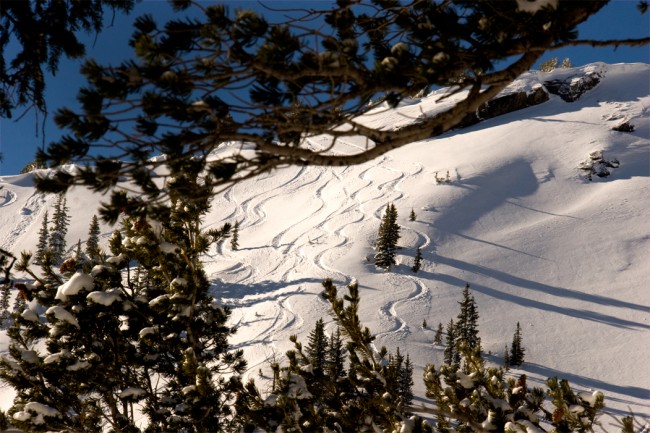