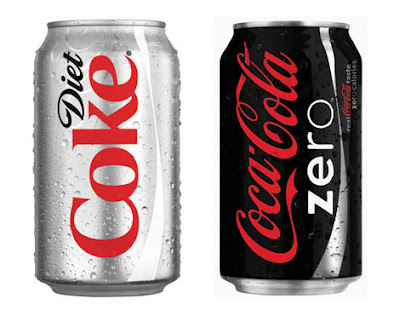 This is not to say that diet soda is a good idea. I don’t even know what is in the stuff. Reading the label makes me feel like an idiot. Like I did in high school chemistry. There are letters – vowels and consonants – strung together to form words, or at least, what look like words. But there is no comprehension. At all.

But I am belaboring my greater quest. And today that has little to do with whether or not diet soda is good for you. It’s not. No, I seek a more nuanced goal, a more noble conclusion. A great and terrible secret that lies hidden in the depths of some corporate vault – that is – I seek to know the difference between Diet Coke and Coke Zero.

If there is one.

Both are zero calorie, zero sugar drinks. They are both marketed to the diet soda crowd, and they both claim to taste “even better than the real thing” (Or was that Pespi? Or U2?). So, really they are both “diet” Cokes. But they are not the same. Except they sort of are.

The two drinks taste slightly different from one another. But not really. They come in different cans. Diet Coke in a classy silver, Coke Zero in a stylish black. Diet Coke has a “with lime” variety, whereas Coke Zero has a “with cherry” version. Which is awesome. It really is. But then, after Fatty’s summer Tri last year the D.C. w/ Lime was also incredible. So they both taste (relatively) good. They both are diet drinks, and they both are made by Coca-Cola.

So really, is there any difference at all?

Perhaps a short anecdote will help prove once and for all that yes, indeed there is a difference between Coke Zero and Diet Coke.

A few years ago I was working on an edit of a documentary film. The film was nearly finished. We were more or less just sitting down to watch the movie from end to end. Make notes, watch for any hiccups, that sort of thing. We gathered at the studio, and before we hit the play button, raided the fridge. Inside was a case of Diet Coke, and a case of Coke Zero. I stared, a little puzzled, at the cases and asked:

“Whats the difference between the two?”

“One is silver and the other is black.”

“It’s simple. Diet Coke is for chicks. Coke Zero is for dudes.”

And there you have it.