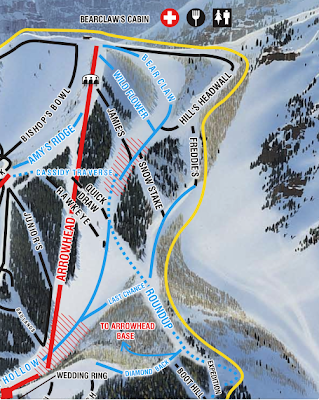 Possibly my favorite way off the mountain and back to the chairlift at Sundance is Hill’s Headwall –> Freddie’s –> Last Chance. Today the skiing was soft (ish) and pillowy. Well, as much as it can be on runs that are cut up by a multitude of turns. But that is one of the reasons I like this particular chain of runs – they get skied less. They are tucked away at the far end of the boundary. Snowboarders have a hard time getting there because of the short cat track traverse. And anyway, it does not make for a good spot to sit down in a massive group and talk about shredding the mountain.

Which reminds me, I watched a boarder from the lift “ski” at least 400 yards down the hill…sideways. He never made a turn. Just skidded down the hill scraping the snow down the mountain as he went. He then settled gingerly into the pack of seals awaiting him at the bottom, where he sat down and no doubt, described shredding the mountain.

In fact, I skied the entire day with Keith who is a snowboarder. And he is good. He actually…turns. And he does it well. Nice, even, swoopy turns. He doesn’t hog crawl along cat tracks, and you rarely see him scoot around like a wounded elk. And although he may have felt an innate urge, he resisted ever joining the many sit-ins we witnessed. All that these pow wows were missing were drums and a group bong.

But, alas, I digress once again.

One of the first things I noticed when I skied this year, after nearly a decade away, was how many snowboarders there are now. At least 1 of every 3 people are boarders. And probably more than that, maybe like 1 of every 1.3, of the kids ages 13-19. When I last made turns, boarders were still an anomaly. Most resorts still hated them. Keith says he wants to buy Alta, and turn it into a “board only” resort. If he counts skis as boards, then I think that would be a great idea.

I’ve noticed a lot of other things. Helmets are cool on the slopes now. And so is plaid and faux denim. Skis have huge tips, get skinny in the middle, and then have huge tails. Oh, and the twin tip is all the rage. You know, so you can spin 360s on the groomers.

I must sound like an old man talking about how great the days of wood bindings and safety straps were.

But I actually like the new style of skis. And indeed, when I finally own a pair of my own, they are going to be gigantic. 108mm at the waist huge.

But back to Freddies. What a great little shot. Its short, but well worth the turns. On a big powder day you can launch into it, landing someplace far below the drop in, splash through the fluff, make a turn or two and end up laughing a snow covered laugh as you glide the cat to Last Chance. It really is one of my favorite spots on the mountain. 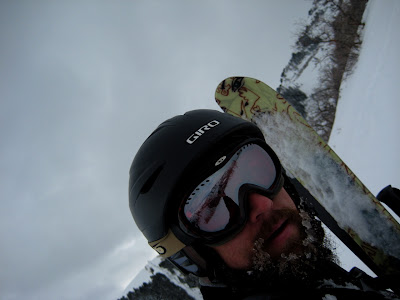 Much has changed. But Hill’s and Freddie’s are as good as I remember.

Here I am today, cutting the semi-soft powder on Freddie’s:

To finish off the day we booted up to the top of Marmot Gulch, which was once lift served. The run itself is an old Sundance classic. Steep, narrow, and more often than not an icy trap. At least as I remember it. But today it had untracked powder, which made our hike to get there all the better. It was an exhausting, fitting end to the day. 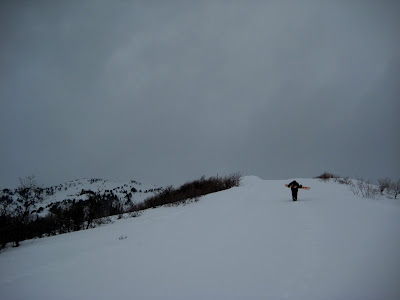