It's the Steeze, You Beater

It’s the Steeze, You Beater

There are some terrible fashion crimes being committed in the bicycling industry. From tattoo arm warmers to weird faux-skeletal jersey graphics, there is no shortage of gag-inducing cycling clothing.

But I am very happy to report that we cyclists are not alone. In fact, we may even be bested by what I can only describe as the hybrid of winter comfort and hip-hop pop culture. A sort of urbanization of the ski slopes, like Andy Warhol and Warren Miller had a child. A child named Steeze. 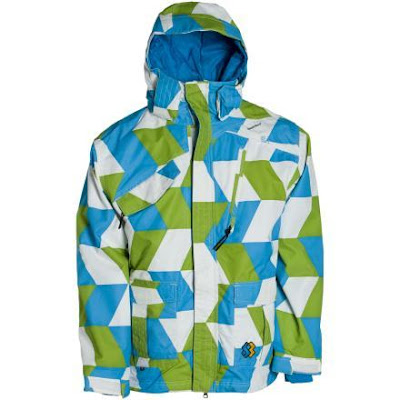 This is the Special Blend Men’s Packer Jacket. Never mind the blush-inducing innuendo in the name. The pattern and colors alone are enough to incite uncomfortable, awkward pauses. On a sunny day I could see this coat dishing out searing reflective pain, like having your eyes dug out of your skull with wooden spoons. I wonder if it was intentional to have the coat look like a paper cup, or if that was just a pleasant side effect of having some duuuude design jackets after a day of wreaking gnaaaarly havoc on the hill? But never fear, wearing this coat will enable you to “put in your ear buds, stash your MP3 player in its pocket, open the Underarm zips, and show the beaters how it’s done.” Perhaps. But while your doing that, the beaters will be deflecting the death rays the Packer is barfing all over the slope, and so will not “see how it’s done” anyway.

Or, how about this one: 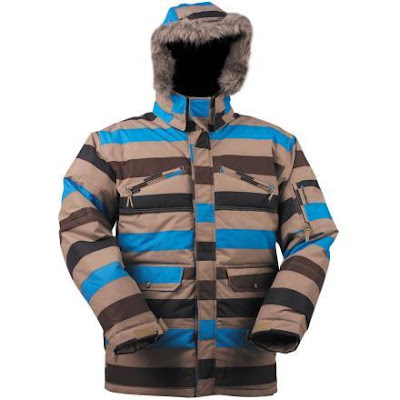 Behold, another masterpiece from Special Blend, the Ninety Five Down. Nothing says ‘awesome’ like a coat patterned from the curtains salvaged from an early 1980s Santa Fe motel room. The fur hood liner adds class and function. “The Special Blend Men’s Ninety Five Jacket is back and ready to assassinate freezing temperatures. A waterproof shell and puffy down insulation make this jacket a threat to winter’s evil intentions.”

It appears that along with freezing temperatures, this coat also assassinated good taste. And if we are going to talk about evil intentions, I’d have to say that anyone who wears this coat in public is intentionally releasing a harmful, perhaps even lethal weapon of mass destruction. Anyone within visual distance of this puffy coat should take great care not to be brought to their knees by the nausea deriving plot hidden within the depths of this travesty.

Another thing that stands out about this coat is that it seems clearly geared toward old guys. Would any teenager or twenty-something wear this? I immediately pictured an older man standing in the lift line, smiling obliviously, wearing this coat, just-out-of-the-box, with the fold seams still visible, while the steezers snicker behind him.

Here is another example: 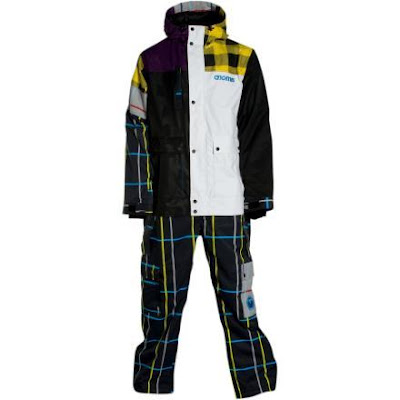 The concept behind the Novis Mystery Suit is fascinating. “…rest assured that this one-piece leaves beaters and gapers jaw-dropped. Nomis made every single one of these suits differently, so yours won’t look exactly like the one pictured, nor will it look like anyone else’s on the mountain.”

Where do I begin? Should I be relieved that my suit won’t look like the neo-dance club meets leisure suit throwback pictured on the web site, or terrified that it might be even worse? And why is it that all these fashion crimes against humanity have to brow beat anyone who gags at the site of them as being beaters or gapers? I feel like I should be outraged.

Anyway, let’s consider that you did end up with the one-piece pictured above. The obvious benefit to this suit is that when you are done embarrassing the beaters on the slopes, the only change of clothes necessary before you hit the club scene or that hot party in the gondola accessed mountain suite will be to slip on a pair of shoes (these would do nicely). Parties are best attended without ski boots.

The touch of traditional lumber jack plaid combined with the tuxedo-esque front panel and the intense pin stripes will have all the ski bunnies wanting to snuggle. The big dilemma will be whether or not leave it on and look amazing, or step out of it, and into the hot tub full of chicks. 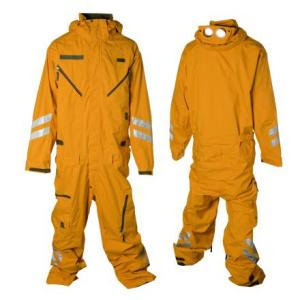 I love the jack-hammer wielding worker meets prison inmate boldness of the DC Scope Snow Suit. Anyone in this suit is going to stand out. The road cone orange will reflect off the snow, creating the illusion of being a fireball shredding the mountain. I especially love the built in butt sag. So even if it actually fits your body, you are guaranteed to look your best. And with the added benefit of this being a one-piece, your sag will never slip to your ankles, leaving your hands free while you carve the slopes. Leave the pants pulling for the beaters.

Oh, and check out the eye holes on the hood. Brilliant. 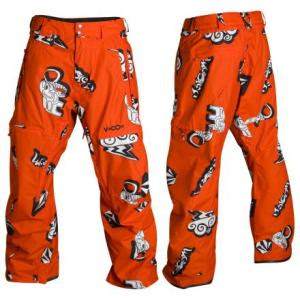 The Volcom Research Pants. “Earn your doctorate of snowboard science with the Volcom Men’s Research Pant.” I had no idea there was such a degree. But I think my 3 year old son has pajama pants that look like the “Guch” style above. But not to worry, because if pajamas are not your thing, the Research comes in a variety of patters. Like the “Yae”: 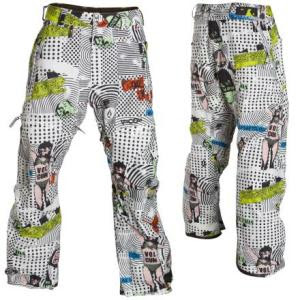 Yae? I think the obvious name for these ought to be Nay.

So remember, as mountain bikers and road cyclists we often find ourselves wearing clothing that normal, everyday people find frightening. Alarming. Horrifying. But we all need to know that we are not alone in our fashion malpractice. While we spin in the c

omfort of our basements it ought to be comforting to know that ski resorts everywhere are being barraged with the assault on the senses that we litter the roads and trails with during the summer time.

However, I think the real loser in all of this are the resort employees who have to deal with bad style all year. From the summer mountain bikers riding the lifts, to the skiers doing the same in the winter, life must be a constant struggle against a flowing avalanche of nausea and an eye gouging offense against sensible taste.

Exit Question: If you had no choice, which of the above would you wear?