Don Quixote was delusional. Idealistic. Insane. He lived in a fantasy world. A place where he was the hero of the story, a noble knight, capable lover, and eccentric adventurer.

In each of us is a little, or perhaps a lot, of Don Quixote. We fool ourselves into believing that the world is full of giants, ogres, and evil magicians who plague the helpless, the poor, the masses. It is our sacred duty to intervene. To make things right.

But these mythical beasts are not creatures, rather they are mountain passes, desert valleys and endless plateaus. They are ideas. Small voices that whisper doubt and failure, misery and demise. Sanity (whatever that is) is the enemy. That ever blithering noise of content and sense. “Leave well enough alone” it bellows, “there is no reason in this madness!”

But Quixote was not looking for reason.

He sought after a thing which was impractical, dated, ridiculous. And he never found it. Not literally. But then, perhaps he was not ever meaning to find anything at all. He just wanted to go looking.

In my own mind, in that corner where ideology and impracticality sit together and plot against the stuffy twins of conservation and rationality, I find a bit of Don Quixote. I fool myself into believing that each new ride is bigger, more important, and more meaningful than it ever will be. I deceive my rational mind, convincing it that what is about to happen will be an exciting, romantic, even noble task. A great adventure. I’ve been telling myself these lies for so long that I embrace them now as fact. As gospel.

And in fact, those delusions of grandeur have indeed become tangible, their veracity gripping at my imagination. In my own mind the ride is a grand tour, a high speed chase, a vision quest. Each soul searching moment, every dark self doubting hour, every failure and each triumph is a turning point. Each a slain beast. A fallen giant. And every last one as real and corporeal as anything I have ever experienced.

Our world is too literal. There is an emphasis on practicality that is like a disease spreading through the veins of the people. Poisonous rationality corrupting the hearts and minds of man. Let us imagine more often. Let us be delusional. Let us see the world for what it should be, or could be, rather than for what it is.

At least once in a while.

With the Divide riders thinning out and finishing (or not) the route, I can’t help but wonder what thoughts tyrannized their minds as they pedaled the lonely miles along the spine of the continent. What giants did they battle? What demons did they suppress? What beauty did they discover?

They return home differently. That awkward out of place-ness that follows any life altering event. They return like a seer, a prophet, as one who has seen and who knows. Only those who have been there will ever understand what that is like. I envy that misplacement, that experience, that knowledge. I want to understand it.

Or, as Peter O’Toole says, as the Man of La Mancha:

I’ve been a soldier and a slave. I’ve seen my comrades fall in battle or die more slowly under the lash in Africa. I’ve held them in my arms at the final moment. These were men who saw life as it is, yet they died despairing. No glory, no brave last words, only their eyes, filled with confusion, questioning “Why?” I don’t think they were wondering why they were dying, but why they had ever lived. When life itself seems lunatic, who knows where madness lies? To surrender dreams – this may be madness; to seek treasure where there is only trash. Too much sanity may be madness! But maddest of all – to see life as it is and not as it should be.

To those Great Divide wanderers who were lucky enough to slip into delusional thought, idealistic meanderings and irrational expectations, I salute you. I envy that sort of passion and motivation. That maniacal throbbing that pushes you to live, and to see.

Life is madness. But only for those who are not already mad themselves. 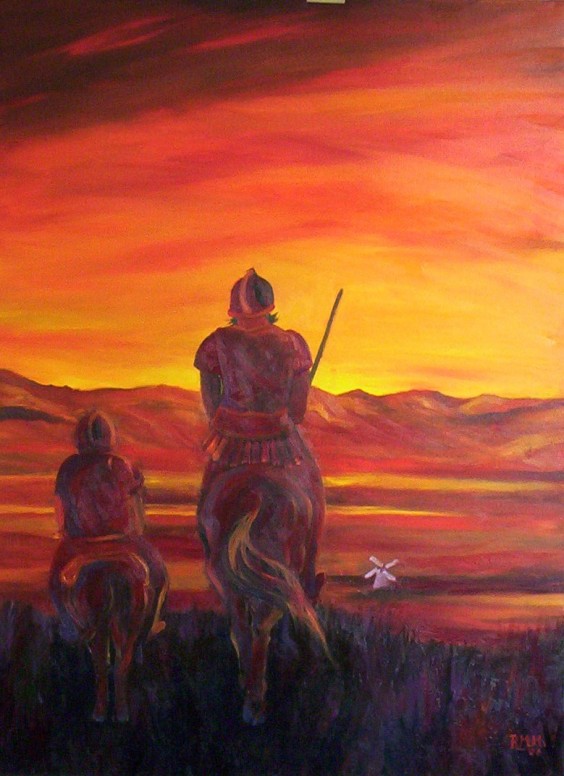 Quijote and Sancho, by Ruth Haggerty