Posted by Grizzly Adam on Oct 19, 2006 in Uncategorized | No Comments

As you have probably noticed, I changed the look of the blog. Let me know what you think!

Granny Gear posted results at last. They also address several of the issues that came up during and after the race. It appears that they are now better prepared for any situation that comes along similar to last weekend.

A few days ago I called a Dave Harris, Nat Ross, Josh Tostado podium. I got the names right, but not the order. Really though, the race could have gone any direction had it had the chance to pan out. 5 or 6 guys were riding very strong. And don’t forget…I had ’em all right where I wanted ’em! Ha!

I am in the process of tracking down some photos from the race, and I also have a bit of video footage I am going to throw together. Things were just to chaotic to get any shots during the real muddy madness, but we did get enough to convey the overall setting of the race. Look for those coming in the next day or two.

In the meantime enjoy this photo from Cycling News. I really like this image. 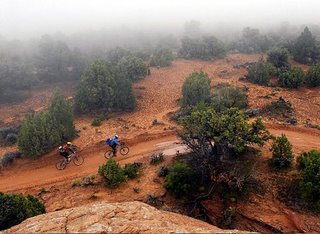