Posted by Grizzly Adam on Aug 11, 2006 in Uncategorized | No Comments 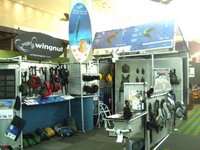 Today was Day 1 of the Outdoor Retail Show. It is huge. Booths everywhere. Knives, backpacks, kayaks, tents, shoes, clothing, lights, food, water filters, hats, sunglasses, on and on….lots of interesting stuff. I had some time to wander around a bit, and saw some pretty cool things. Of particular note was Princeton Tec’s new LED based bike lights. These are not like the current line of bike lights they have now. These are their foray into the nightriding scene…as in racing. There were 3 models. Each based off of a 3 watt LED. There was a single, double and triple, each with high, low and flash modes. The double and triple were very similar in design to Cateye’s offerings. Quoted burn time on the triple (three 3 watt LEDs) was 6 hours constant output. Nice. They should be availabe in September. The price point was steep though, and the battery packs a bit bulky. However they looked like solid designs. I am interested in getting a closer look at them, and perhaps testing them out on some trails.

Lots of folks stopped by our Wingnut booth. The packs are so unique and well designed that they can’t help but turn heads. Even Camelbak showed up to take notes on the designs. Sorry guys…they are patented. Take your smug smiles elsewhere! I got a chance to spend some good time with Eddie Odea. He is a dedicated, detail oriented guy, and I have to think that those traits really helped him to his impressive finish at the 24 Hour Nats.

Scott from Wingnut is also a great guy. He is passionate about what he is doing, and has a niche in both the world of hydro packs, and in portable solar powered panels. In June at Primal Quest he built a tent that was completely solar powered. Inside there was a swamp cooler, lights, hot water…the works.

All in all it was a good day. I am looking forward to spending another one up there tomorrow.

Oh, and it looks like Dave and Lynda are 5 for 5. They could sweep the entire race! Incredible.