Friday ticked by slowly. I hung out at our camp site near the Slick Rock trailhead, or in town lying in shade at the city park. It was a hot day. A sign of things to come. Finally the shadows started to grow, and the sun began to drop. I met up with Kenny Jones, and we enjoyed dinner at Zax. Soon after, while getting last minute gear together, the moon rose large and brilliant over the La Sal mountains. Another sign of things to come. 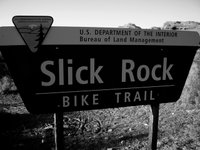 Ten minutes before eleven o’ clock I coasted into the Slick Rock parking lot. It was crowded. There was a thick anticipation in the air. We had a brief race meeting, and then at midnight, with a little more than a whisper, Mike Curiak unleashed the 56 rider field. The 2006 Kokopelli Trail Race was at long last underway.

Into the night we climbed. Almost immediately the field spread out. I was feeling good, and got into a nice rythm. After the Porcupine Rim trailhead, the climbing gets serious. High above me on the steep switchbacks I could see a couple of lights moving upward. The night could not have been better. The moon was huge, it cast its light down on us making it possible to climb without our lights. Like ghosts we ascended the mountain. 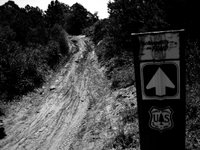 I don’t know that I have ever had a better moment on a bike before. With the moon looming large and bright, the air crisp and cool and the prospect of the days riding all combined to create a two-wheeled euphoria that seemed to capture perfectly the spirit of the Kokopelli Trail Race.

On through the night I went. Contact now with other racers was diminishing. Lights behind me were further behind, and as far as ones in front of me, well I could only guess as to where they were. I came to the base of a short steep climb that I mistook for Rose Garden Hill. There were spectators there, and as I rode by they yelled “7th!” I had my iPod going by this time, and I was not sure what they had said. My first thought was “what are people doing out here at 4AM?! “Did they say 7th, or 27th?”

A few minutes later I paused at the top of the fake Rose Garden hill and enjoyed a chocolate Ensure. I cruised through Fisher Valley and soon enough met the real Rose Garden Hill. It was brutal, and it tore up my feet pretty good. A rider passed me, he was practically running up the hill. I had to regroup mentally after the hike-a-bike and the ensuing climbing after it. I was in difficulty for the first time. Eventually though I reached the top of the world, just as the first light of morning topped the horizon. The timing was perfect. The mental fatigue dried up with the light, and I knew that the Dewey Bridge was not far below. I crossed the historic suspension bridge a few minutes after sunrise. 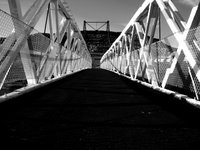 At McGraw Bottom I had a quick breakfast, and then started the first real progress to the east. I had left the mountains behind, and now it was time to face the desert. And the heat. From McGraw Bottom to Cisco I was feeling good. I spun evenly, and the smooth double track and pavement sections were a nice reprise from the technical morning. Cisco to Westwater also went by quickly. I was feeling invincible, just motoring down the trail. In the distance I could see the sun reflecting off the roof of the Westwater boat launch. I knew that there cold, clean water awaited. 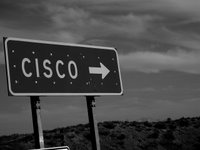 As I approached the ranger station Lynda blew by me. She came out of no where. I managed to ride up next to her on the pavement, and we chatted a bit as we filled our bottles. Eventually though she rode away from me on the Westater Mesa climb. I was amazed at the cadence she was spinning.

This is when things started falling apart for me. It started sublty. I found myself getting angry at the course, cursing every incline, rock and rut. It was not difficult terrain, but I was struggling. I reached the top and thought for sure that the quick descent in to the valley would lead me directly to the Rabbit Valley exit. Wrong. The route wound me through the hot dusty desert for another 10 miles or so before I finally saw the familiar surrounding of the Rabbit Valley exit. From this point on I knew exactly what lay ahead. I had ridden Rabbit Valley to the finish just two days before the race. 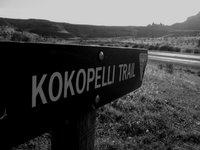 When I reached the top of the Salt Creek singletrack, I was both excited and weary. The next 15 miles were the last 15 miles, but I knew that they would be the most difficult. Any energy I had left was quickly sapped from me as I picked my way through the rocks and boulders. I crossed Salt Creek, and was very tempted to dive in. Somehow I knew though that if I did that, it may mean the end of my race. I kept moving forward. That is, until the hike-a-bike after the bridge. I had one gel left. I choked it down, then promptly puked it back up. My dry heaves echoed off the canyon walls. I crawled over the boulders to the Troy’s junction, managed a few hundred more yards up the trail before I finally had to sit down. I sat in some shade and pulled out a clean dry rag. I had packed it for such a situation. I pulled the bladder out of my pack and soaked up the last bit of water I had with the rag. With the cool wet rag on my head I sat motionless for how long I don’t know. It was a peaceful time. The breeze was warm, but welcoming. I let my eyes close, and I took deep even breaths. Eventually I cooled down, my blurry vision went away, and I was able to press onward. 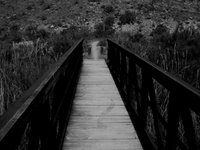 When I finally arrived at the finish line I couldn’t speak. I managed to get my name to Mike, so he could mark my official time. I fell into a lawn chair and started to go to work on the cold water that my little brother had just shoved in my face. I drank it slowly as the world around me started to come back into focus. Several of the guys hanging out with Mike Curiak came over and offered me food, drinks, and anything else I could have imagined. Mike shook my hand and I thanked him for a great event. Slowly the satisfaction started to sink in. I was a KTR finisher. The months of planning and over-analyzing, and exploring had all paid off. I was a KTR finisher. I let that thought run through my mind a few times while I dozed off in a lawn chair at the finish line. 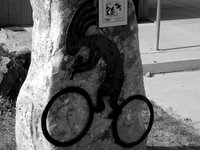 Official results can be found here. In the next few days I will post more thoughts on a few different aspects of the race. Including gear, lighting, strategies, etc.

When I made my previous post, I had not really taken the time to do the actual math. Turns out I was an hour faster than I thought. I can’t complain about that.

So my official result was 17h 25m. Good enough for 10th overall.