Posted by Grizzly Adam on May 7, 2006 in Uncategorized | No Comments

Today I rode the 5 Mile Pass XC race. I had a couple main objectives going into this event. First, I wanted a hard sustained effort in a competitive environment. Something I really haven’t had a chance to do this year. And Second, I wanted to get a better idea of where my top end fitness is. Of course underlying those was the desire to finish well. Both objectives were accomplished, and as icing on the cake I finished 2nd in the Expert field.

The course consisted of a rolling 11 mile loop. A lot of short, steep grunt climbs, a couple long steep grunt climbs, one longer gradual climb and a horrendous hike-a-bike. Over the last few weeks I have felt that I have made some marked improvements in my short grunt climb abilitities. Today was a good test of those perceptions, and for the most part they proved to be correct. Througout the race I was able to put time on people while grinding up these climbs. So, I was really pleased with that.

The race started at a moderate pace as the field found its legs. After a few minutes a group of four, including myself seperated from the main group. Eventually I lost contact with the other 3, but over the next 2.5 laps was able to pull all but one of them back. Early in the 3rd and final lap I caught the 2nd place rider. I was surprised when I pushed the pace a bit, that he did not react. Seeing that he was hurting I put down a hard push and left him for good. The lead rider was no where to be found however. The last I saw of him was about halfway through the first lap on the big ugly hike-a-bike. In the end he finished a full 6 minutes in front of me. Ouch!

All in all though I am very happy with the race. It has been a couple of seasons since I was really competitive at the ICS. One of my bigger weak points has been short burst power, and I really feel that this year that is not the case. My top end speed is faster, and I can sustain it longer. Hopefully soon that will really start to cross over into my endurance racing.

The Mad Dog Cycles team had a great showing, with several podium finishes. Congrats to K.C. who finished 2nd in her first Pro race! 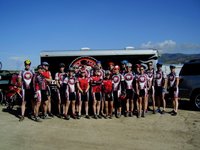