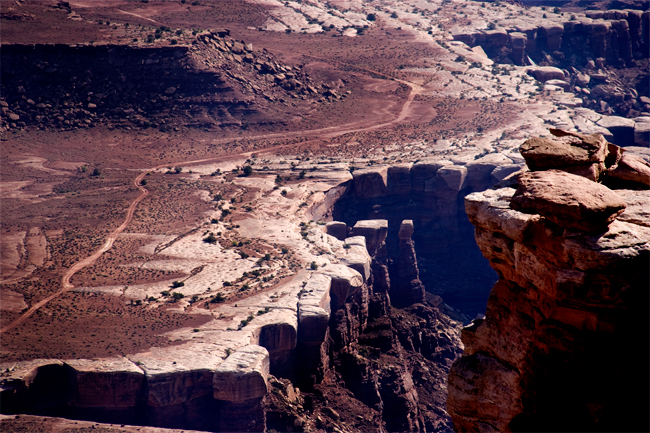 The scheduled rain was running late. We didn’t hang around to see if it would show. We arrived in Moab Friday morning and were ready to ride within the hour. My plans to scout the Kokopelli Trail were thwarted by previous wet days. All reports indicated the the La Sal section of the trail was unrideable. So Friday we rode the Sovereign Trail, and Gemini Bridges. The weather held out and we enjoyed a great precursor to our White Rim tour that would follow on Saturday.

Because of the recent rain in the area, the Shafer Climb on the White Rim route was closed. This altered our plans somewhat and after some discussion we decided that an out and back style ride would have to do. This would give us the opportunity to shorten the ride should the need arise. Saturday morning arrived, and to our delight, the sun was shining and the skies were clear. We parked the car on Potash road, underneath the massive wall of Amasa Back and set out on our epic day.

The wide open spaces of south eastern Utah are some of my favorite places in the world. Canyonlands National Park provides a great opportunity for open air exploration. The White Rim winds its way along the top of canyon walls and through oceans of sagebrush, all the while snaking along in the shadow of rock formations that seem to defy physics in their balance and structure. In these wide open spaces the wind blows, and Saturday was no exception. We fought strong headwinds most of the “out” section of the ride. As we crept over a short, but steep pass the wind whipped into our faces, stinging exposed skin with blowing dust, trying almost successfully to blow our bikes to the ground. We pressed on admiring the vast landscape and enjoying the windy silence of the desert.

One of the reasons I enjoy these remote areas is the feeling of isolation. There is a respite from the every day taskmastering that rides near home don’t supply. Despite the tiring nature of these type of rides, I always return feeling refreshed and renewed. There is good therapy in desert isolation. We wove our way through the canyon country keeping a close eye on the dark clouds that seemed to be trying to sneak up on us, catch us off guard, and drop a day’s worth of rain on our heads. They never did though. The most we got was a few isolated drops. The headwind that we cursed all morning became a godsend in the afternoon. We were riding the opposite direction and we began the “back” part of our trip. The miles flew by as we enjoyed the gentle push from the wind.

8.5 hours and 80 miles after we left the car, we arrived back to it. We were tired, but happy. It was a great day on the bike and a reminder of how good an epic day can be. That evening we talked about our good day over some decent Mexican food. Always wanting to have another epic day in the saddle, our thoughts and conversations turned to returning to the White Rim….sooner rather than later.