24 Hours in the Old Pueblo

24 Hours in the Old Pueblo

Posted by Grizzly Adam on Feb 21, 2006 in Uncategorized | No Comments 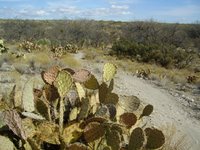 First things first. 24OP was a great time. The weather was perfect, the course was in good shape, and the racing was fast and furious.

My teammates rode hard fast laps, and we were rewarded with a 2nd place podium spot in the 5 Person Open (age 200+) class. To Chris, KC, Paul, and Boris….Thank You!.

We arrived at the race venue Friday evening, just before sunset. We got our tents up, fine tuned our bikes, and settled in as black clouds loomed on the horizon. There was flashbacks to last years race when rain pounded the course all night long. Shortly after sunset the rains came. 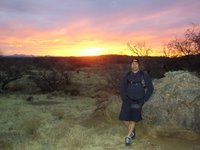 But this time the rain gods were merciful, and wetted the course with a perfect amount of moisture. I awoke Saturday morning to a clear sky and the smell of fresh rain on the desert. It was a fitting way to start the dawn of the 2006 race season.

Noon arrived, the shotgun went off and the lead racers were off and running. Some were off and walking. The race, and the race season was officially underway. Paul was our lead rider, and despite the tight singletrack, and the deadly cacti that tried to prevent any passing, was able to turn a very solid 1:05 lap, setting our team up very nicely for the afternoon battle for early positions.

Chris followed Paul with a sub 1 hour lap, and from there we were rolling. We got our first standings check around 4PM, we were holding 2nd place by about 30 minutes, and were down on the leaders by about 15 minutes. As the night fell we had gained some ground on the elusive lead team, closing the gap to 7 minutes by midnight. Our encroachment must have startled them because over the next couple of laps they gained those minutes back. However we had a solid lead over the third place team, and our focus moved toward holding 2nd, while still pursuing the leaders.

The sun rose on a beautiful desert horizon, and quickly warmed up the temperatures. It was a sign of things to come, for just as we thought we had a lock on 2nd, we were reminded that anything can and usually does happen in 24 Hour racing. Like the temperatures, the racing was about to heat up.

Chris went out at 7:20 AM. He had been our fastest rider, and we fully expected another solid lap from him at this time. When 8:20 rolled around we started watching for him on the fast single track descent that curled its way through camp. 8:30, then 8:40, then 8:50…no Chris. Finally at 9:10 we spotted him coming down the last stretch. A few minutes later when he returned to camp he explained what happened. 4 flat tires. His initial flat tire was unable to be repaired because the nozzle on the valve stem broke off inside his compressed air adapter.

He was out of air, and out of tubes. So he started asking for tubes and air as riders passed him. He got a couple tubes, 26ers that he was able to stretch around his 29er rim, but as soon as he’d get them inflated something would go wrong and air would fizzle out. Finally on his 4th try he got the tire inflated and sped around the rest of the loop. To whomever dropped tubes and air to Chris, thanks…you saved our podium spot.

Our hold on 2nd had shrunk to just 6 minutes. KC went out and put in a clutch 1:10 lap, and I followed that up with a 1:06. Boris set out at 11:30 as the 4 of us waited in the start/finish area for our pursuers to arrive. KC and I had upped the 6 minute lead to 13 minutes. As long as Boris rode a clean lap we knew that 2nd place was ours. It was with a sigh of relief that we cheered Boris into the final single track as he cranked out a 1:10 lap to clinch the spot on the podium. 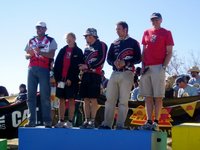 We greeted the Russian back to our camp with cheers and congrats all around. We were very excited that 5 of us from snowy Utah had some “get up and go” in our legs and lungs in February. I can say that I have not felt as strong on the bike as I did this early in the season since…well…never. Perhaps the time in the basement, at the gym, and out in the cold is coming to fruition. I hope that the good vibes in my legs are a precursor of things to come later this summer.

To the promoters of the race, thanks for a great weekend. The course was fun and fast, and it was an interesting challenge to be dodging cactus rather than rocks or trees. I hope to return to the Senoran desert many more times for the 24 Hours in the Old Pueblo. 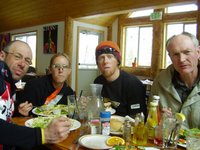