Posted by Grizzly Adam on Jan 26, 2006 in Uncategorized | No Comments 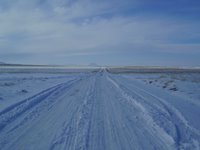 I went out today and explored the Pony Express trail. I was pleased to find that the road, while still mostly snow covered, was easily rideable due to trucks that had packed all the snow down. I was less pleased to find that some sections of the trail were a gooey mess, and it wreaked havoc on my drivetrain. I don’t think I have been on a ride where I felt so isolated. I was 40 miles from the nearest gas station or grocery store. Yet, I still ran into a few people out there. A Fish and Game officer pulled over and I could tell by the look he gave me that we was pretty surprised to see a biker out where I was, at this time of year. He was nice though. He stopped to make sure I did not need any help, and that I was alright. 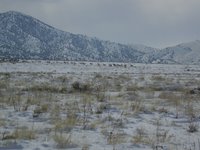 While I was out there I thought a lot about the possibility of an endurance race. While the route itself would be ideal for a long race, the one drawback is that it is absolutely remote. There is nothing for 130+ miles. I realize that other races are quite remote as well. However this route ends in the middle of nothing. Most races of this type will end in a town, or close enough to one where a rider can get cleaned up, support crews and greet them, there is food available, etc. This route ends near the Utah/Nevada border.

So I started thinking that if there was such a race on the Pony Express route that perhaps support vehicles would be recommended. Or possible support stations along the way. But that sill leaves everyone 100 miles from nothing at the end. Perhaps the race could be an out and back epic of 300 miles or so. Or maybe it could be a 2 day stage race. Ride out on day 1, ride back on day 2.

Anyway, there are certainly different possibilities to make a race out there viable. I want to get back out there and ride deeper into the route. It may have to wait until later in the spring though. I can see that road being a horrible mess during the wet, snow thawing months of March and April. 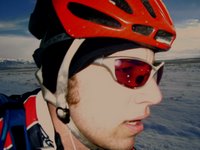 Total time in the saddle today was 5 hours. I felt great throughout the ride. Except when I made the mistake of standing to pedal when underneath my tires was a slick coating of ice. As soon as I began my downstroke my bike went out from under me and I did a perfect bellyflop onto the hard icy ground. Later in the ride I reached into my pocket expecting to find a Power Gel. Instead I found a gooey, sticky nightmare. The gel had exploded on impact and filled my pocket with Green apple flavored gel. My keys were in that pocket. Some of them were stuck together. I guess better that the gel exploded, and not my camera, which was luckily in the other pocket.