Posted by Grizzly Adam on Jan 25, 2006 in Uncategorized | No Comments 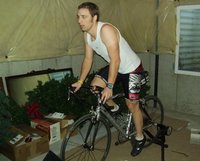 I spun for 1:10 on the trainer today. I was out of the saddle for about 45 minutes of that time. It was a nice sustained effort. Tomorrow I don’t have to work. Which means, if the weather cooperates, I am going to go explore the Pony Express Trail. I am not sure what I will find this time of year as far as snow, mud and other conditions, but I am confident I should be able to get in 3-4 hours of good solid grinding.

While spinning on the trainer tonight I watched an old skool classic Tread. Bad acting, good riding and some nice photography make this a classic mountain bike film. A few years ago for Christmas I got Tread/Retread on a single DVD. Every now and again I will fire them up and watch what was cutting edge in 1996. Maybe next time I ride the trainer I will watch Retread.

A lot of Tread is filmed in Moab. And it got me thinking about an old skool trip I took to Moab back in 1995. It was Thanksgiving weekend and a friend of mine and I decided to head down for some riding. The trip was spur of the moment, but in a lot of ways resembled Hans and Gary in Tread. We got down there late at night, and just parked his van on the side of Sand Flats Road near the Slickrock Trail. We climbed into the back of the van and between our gear and our bikes found enough room to roll out our sleeping bags and call it a night. We awoke early the next morning to find a Park Ranger tapping on our window.

He chastised us for parking on delicate soil, and told us to make sure and park and camp only in designated areas. He was cool about it all, and realized we were just a couple of idiot teens. Later in the day he rode by us on the trail while my buddy Sean fixed his chain with his teeth.

It took us far to long to ride the Slickrock loop. We spent a lot of time goofing off and taking pictures with a disposable camera. We worked on our endo skills in a typical Moab trail sand pit. We must have gone over the bars 4-5 times just because it was fun. We never did capture the perfect picture of going OTB. I rode my Raleigh M80. It was slightly to big for me, but it had a RockShox fork and in those days, if a bike had a front shock that made it a sweeeeeet bike. Actually it was a decent bike for that time, and it was the steed that got me hooked on this crazy sport. I still have that bike. The last time I rode it, I was riding to a class at BYU when the rear derailleur fell off. I showed up to class 20 minutes late and my hands covered in grease.

The trip to Moab was some of the best fun I’ve had on a bike. I wasn’t into racing back then, and in fact I used to make fun of race geeks who were always decked out in spandex and shaved their legs and rode overly expensive bikes. I guess times change. 😀

Digging up these pictures reminded me how much fun riding a bike is. Beyond training plans, race results, top of the line equipment and race fees lies an activity that most of us have done since we were kids. I love racing and competing. But if for some reason I could never race again, I’d still spend just as much time in the saddle. I’d still venture out onto epic 8 hour rides in the wasatch back country. I’d still get down to Moab and ride Slickrock, Amasa Back, Porcupine Rim and all the other incredible trails down there. Riding is riding regardless of whether there is a number plate on my bars or a clock keeping the time.

Of course, racing adds a lot of excitement, motivation and intrigue to the sport. I love to compete and feel the rush of adrenalin that surges through my body when I pass a competitor, or the sense of panic when he passes me. Racing is racing despite the number plate on my bars or the clock keeping time.

That trip to Moab was a great time. In fact, every trip I have taken to Moab is memorable. Whether my first time to the 24 hours of Moab, when I had the chance to meet and interview Gary Fisher (more on that later this week) to this most recent trip when I spent the night puking during the 2005 version of the same event. Moab is a great place. And I am all that much more excited about notching up another great adventure down there this weekend.