Posted by Grizzly Adam on Jan 20, 2006 in Uncategorized | No Comments 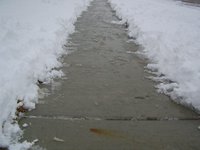 So…I have been a slacker the past couple days when it comes to blogging. The winter storm that I posted about arrived, and dumped a bunch of snow on us. So I have been doing more indoor workouts this week. Lately I have been aching to get out on a good solid epic ride. 5-6 hours in the mountains. I have been putting together a route for one I think can be done in the winter. It traces the old Pony Express route that traveled through Utah on its way to California. The route today is mostly dirt road, and covers about 120 miles I think. From everything I can gather, it would make a great epic ride. I think in the next week or two I will head out and do a find out ride/drive and see what conditions are like. Even in the summer this should be a good option for some long sessions on the bike. It should be agreat training ground for the KTR.

I get to a point in each race season where I start to get ancy for races. I remember when I was playing college lacrosse, we practiced everyday in the fall and winter. It was intense. We worked hard, but never got to play any games. By the time March rolled around and the season got under way, I was exhasted. Of course the season brought new energy, but it took some doing to get mentaly and physicaly rejuvenated. To a lesser degree, a lot lesser actually, I feel the same way right now. I am excited to start racing and competing. The cold weather TT tomorrow should feed that craving, and then with Old Pueblo just a few weeks off, I think I will scratch these itchings I have been feeling as of late. I am still enjoying the training and preparation that goes into an off season, but the bug to go big is biting.

I need to make a choice soonish on which pack I will be getting. I am still considering both the Camelbak and the Wingnut brands. Without any hands on experience with the Wingnuts, it is going to take some good testifying from those who do have time with them strapped on thier backs for me to be convinced. I am sold on the concept, but it is hard for me to buy somehitng like this without trying it on, handling it, testing it.

I recently was at my parents house. My dad had 2 of these books (The Utah version) sitting on his shelf. I don’t know how he ended up with 2, but I relieved him of the extra, and now I have the ultimate epic ride guide and planner. 500+ pages of maps, GPS coordinates, write-ups, directions and pictures of Utah’s great back country roads. I am looking forward to exploring new routes and roads this coming summer. Like Nick Martin recently wrote, just beyond your own driveway may be trails and roads you never knew existed.

Hmmm…..I just had an idea pop into my head…something about an epic, self suported “trans” style race along the Pony Express trail. Hmm….this could be very interesting. Pain at the Pony anyone?