Posted by Grizzly Adam on Jan 29, 2006 in Uncategorized | No Comments 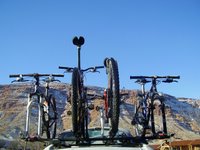 I had a nice weekend in Moab. I was not able to get down there in time for the Friday ride, but we made it through a nasty snowstorm on Highway 6 and were able to enjoy a great Saturday on the Sovereign Trail. The snowstorm had reached Moab, and left about an inch of snow on the ground. But, Chris continued to assure us that by 10 AM the “sun would be out and the snow would be melted.” Well. He was mostly right. The sun was out when we awoke on Saturday morning, and the snow was melted except in shady areas.

We had a great time. It was a quick trip, but we did what we set out to do, and that was have a good time riding our bikes for a long time. I think each of us crashed a few times. Chris was the first to go down. I looked up the trail to see him on his back with his bike still clipped in to his shoes sticking straight up in the air. He was in a perfect upside down riding position. Tim had a perfectly executed endo, and as for me, well I stalled out on a technical climb, fell over and landed on some very friendly rocks. My swollen hip however wold say otherwise about just how friendly the rocks were.

The most sketchy part of the trip was the return drive. The snowstorm we had traveled through coming down had only worsened, and we were stuck crawling along through the mountains at a snails pace. The road was covered in fresh slippery snow. But we made it through, even if it took us twice as long as normal. All in all, it was another Moab trip worthy of recounting on future road trips. 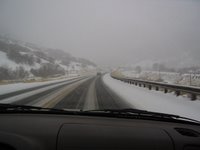 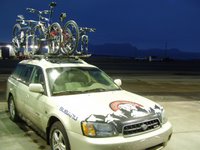 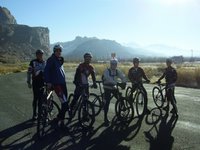 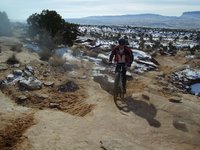 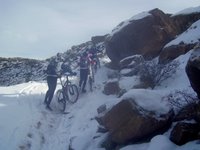 Not even the 29er helped up this climb 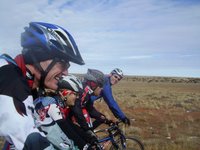 All smiles as we head back to town