Posted by Grizzly Adam on Oct 5, 2005 in Uncategorized | No Comments 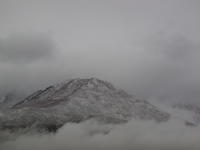 They said the snow was going to come on Tuesday. And it did. I woke this morning to a thick cloud cover on the mountains and a drizzly rain. By mid afternoon the clouds parted enough to reveal a nice thin layer of snow above about 6000′. So right now most of the mountain trails are a muddy mess. Combine that with the shortening days, and that equals more time on the trainer in the basement. I spun easy tonight while watching Napoleon Dynamite. I am still trying to decide if I am proud or ashamed that I went to film school with Jared Hess and Jon Heder. Actually those guys are pretty dang funny, and I think the film is hilarious. I am anxious to see if they can follow it up with something equally as inane and amusing. As for me…well I just make heavy un-funny documentaries right now. Not that I don’t enjoy it. I am working on some great projects at the moment. Anyway, back to your regularly scheduled blog.

The weather is supposed to warm up later this week. Hopefully that is the case. I’d like to get in a bit more trail time before heading to Moab next week. I need to start watching the weather down there. Not that it really changes my plan. I take every piece of cycling gear I own. Which also reminds me, I need to start gathering all my junk for the trip. Clothes, tent, canopy, food list, blah blah blah…man these 24 hour races are a production to get ready for. Speaking of which…tomorrow Jeff Kerkove flies to Japan for a 24 hour race. Just think, with the jet lag screwing up his sleep patterns he will be wide-eyed and bushy-tailed during the night hours when everyone else is struggling to keep thier eye lids glued open. Good luck, and let us know all the details!

I added a new link, Jason Sager a pro mountain racer and new Utahn, has a nice blog up and running. Check out his forums also!

That’s it for tonight. Laters.