Posted by Grizzly Adam on Oct 9, 2005 in Uncategorized | No Comments

I Went out today with Tim and Chris on what really was my last training ride of 2005. Next week will just be short easy efforts to keep the legs and the bike happy. Today we set out at the very early hour of 10:30 AM (hey, we were up late with Lance last night!) and climbed the The Alpine Loop. We left from my house, and climbed the American Fork Canyon side of the loop, which is about 12 miles of climbing from the mouth of the canyon to the summit. We set a pretty good pace up the canyon, even doing timed intervals on the lower slopes. At the summit, where the Ridge Trail begins, we ate a bit, potty breaked, and then began the switchback filled descent down Sundance canyon. Tim caught a patch of gravel and went down, but it wasn’t to bad. He escaped with a few scrapes and some bloody knuckles. His bike looked like it survived without to much damage as well.

So, it was a nice day in the saddle. I am glad we left when we did though, because not long after we returned home the clouds gathered thick and black, and soon the rain was pouring down. Rain here in the valley this late in the season means snow in the mountains. Winter is coming.

I was pretty spent after the ride today. It was a long hard workout that really got the legs and heart pumping. It was a nice way to end what has been a very good 3 months of serious training for me. I got off to a slow start on the season this year, and it feels good to be in good form going into the behmoth that is the 24 Hours of Moab. 51 solo’s so far are registered, and another bizillion teams. The amazing thing though, even with so many people out on that course, there are times in the wee hours when you find yourself all alone. Those moments usually only last a minute or so, but those moments are one of the things I love about that race. Everything is quiet and dark. It’s cold and lonely. It is those times when I most feel like a “solo” racer.

Allright, I’m off to ice the legs and then it’s time for the blanket show. Gotta get a lot of ZZZ’s this week. 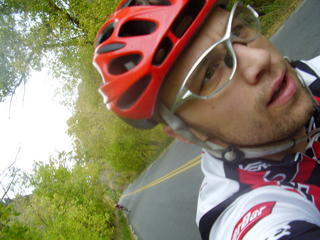 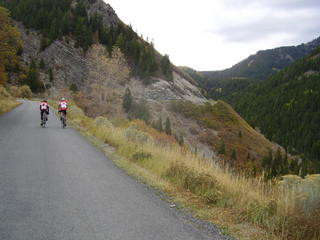 Chris and Tim on the switchbacks 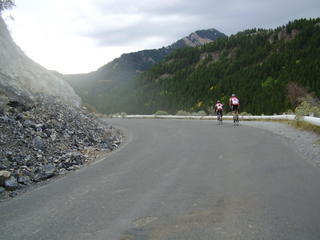 More action on the switchbacks